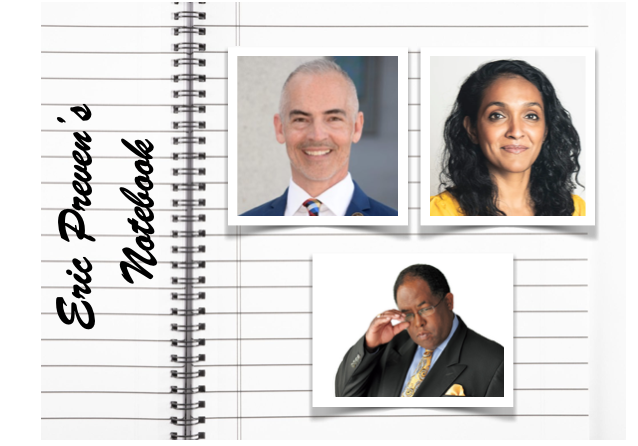 ERIC PREVEN'S NOTEBOOK - The Inboxes are blowing up at the California League of Cities offices.

The public is trying to ascertain if more than last year's 1,600 officials showed up at this year's conference in Sacramento.  It's a nail biter... as attendee numbers are still being tabulated.

Past President Alex Padilla, Los Angeles (2005 - 06) must be kvelling as it was merely, four years ago, that Mitch O'Farrell the council member from CD13 los to Joe Buscaino of CD15 for the job of head cheerleader for the City of LA at the League of California Cities annual conference and hootenanny.

Hopefully, a "bridge exhibit" at City Hall will make plain all the impressive work Wesson and Englander et al. have done vis a vis ...  pay to play activities over the years.   If there were an award...

If nothing else, Mitchell O'Farrell is scrappy and this week he returned with a vengeance.  Though, five council members were absent, and so didn't vote for him, this week he assumed the role of President Pro Tempore or, if you prefer,  Nury Martinez's sidekick.  Padilla has gone on to be one of the two US Senators from California.

As for the League of Cities conference this year in Sacramento, though many big names were not in attendance, a deeply moving keynote by a former paralympic champion set the right tone and all of the special interest groups were afforded ample opportunities to caucus and get blasted at local bars.

Attorneys were out in force including Timothy Coates of Greines, Martin, Stein & Richland LLP, the attorney who lost to the ACLU and a member of the public who wanted to review the legal bills paid by LA county to private law firms. The Supreme court ruled that they were indeed discloseable public records.

Odd, how the county continues to deny and obfuscate re how much Skip Miller of Miller Barondess, LLP,  the county's Tom Girardi-style windbag, has been earning... behind a veil woven together out of secrecy and incompetence.

Still, Coates likes to party and provide chilling defenses to city and county malfeasance wherever needed.

Christi Hogin, of Best Best & Krieger LLP, the pay to play City Attorney shop that services City of Malibu was among those seen lecturing briefly and presumably... hobnobbing.

The firm of Burke Williams & Sorensen, LLP was in attendance lecturing about something or other...

Hopefully, next year that firm can address their seats on both the unethical conflict panel and the unethical CEQA Panel in the City of Los Angeles.   Since they also have contracts to represent the city, they scored a Conflict hatric!

We'll be sure to submit the firm for an upcoming, SHAME award (patent pending)... but the City Attorney/Malfeasance  category is almost certainly going to go to Meyers Nave in Los Angeles.  We'll monitor and report back...from 300 feet.

The theme of this year's conference should have been pernicious revenue and egregious overspending but just before press time, it was changed to 'equity and inclusion'.  Fair enough.

In preparation for next year's conference, many council members and supervisors from around the state were hoping for a greater turnout from Los Angeles, who cite the conference on their official recess schedule

Maybe some of the proposals suggested below could be rolled out at the National League of Cities City Summit (also on the recess schedule:

The SHAME Awards and suggested programming notes for 2022 should goose up attendance next year:

Gil Cedillo would provide a seminar next year on "creating confusion"  "exercising trace amounts of moral courage" while pushing an  "over development and high density" agenda.   The importance of (and shame) invoking real historic civil rights leaders to confuse hapless Angelenos.

Paul Krekorian should consider lecturing about his contention that a 10 billion dollar City budget constitutes one item for which the Brown Act (he claims) requires just sixty seconds of public comment.  This false assertion has been a massive crowd pleaser with Council colleagues as it mesmerizes lazy Editorial boards on both coasts annually. Also, I bet he has a good 45 minute talk on how to tie everything up in litigation until you term out.

Nobody prefers Street Furniture and OutFront Billboards more than Bob Blumenfield of the West Valley, CD3.  He will not tolerate any loss of service in the public toilets provided through the Coordinated Street Furniture Program when it transitions to the Sidewalk and Transit Amenities Program in January 2022.   Given the drought, "If it's yellow, please let it mellow...and so on."

Blumenfield's occasionally hard questions asked, frequently fail to ignite much interest, on account of his mild mannered delivery. To cut expenses on Halloween costumes, he may be going this year as Fernando Campos.

Nithya Raman of CD4 is statistically the most likely to go down in flames, following David Ryu's robust district wide infuriation campaign.  She'll very likely defeat the instant recall effort, but national crime rates and abject poverty may hurt her approval ratings.  Hopefully, sticking up for what she believes  - a sensible citywide solution to homelessness - will not unravel before next year's conference.

The "idler in chief"  Paul Koretz who pressed to create an anti-automobile idling law, electrified prior conferences with his steadfast refusal to discuss the 6:1 public matching program for contributors, while confessing, "It's easy to raise $25,000"  in one of the wealthiest NIMBY districts. Hopefully, next year, he will address "Bans" of all kinds, including Bans on city "banning ordinances" and running for Controller after a full-ride as council member.

The council president, Nury Martinez, who is "most likely to be dethroned 2022" on account of her bizarre refusal to appoint a third banana, will be expanding on her 300 foot perimeter fiasco.

Monica Rodriguez of CD7, has been credited with devising one of most aggressive "power washing with a velvet glove" programs statewide.   By scraping 'constituents'  out of her district and erecting fences she has won the support of numerous compromised council members.

Most Baffled: Marqueece Harris-Dawson, pretending that he didn't know that Atlas Capital Jeffrey Goldberger and wife gave him the max x2, after canceling the max x2 to Richelle Huizar.

Longest gestation period of any item goes to, Curren D. Price, Jr. the gentrification engineer from the New Ninth, who had the good sense to marry a displacement specialist Del Richardson Price, is still circling around about the astonishingly unfair street vendor licensing program.

The gustmaster himself, Mark Ridley-Thomas should agree to lecture on "shadow puppets" and his recent appointment of Karen Bass to the Office of Mayor of Los Angeles.

Mike Bonin of the richest district 11 will be partying on the Patio until dawn and could provide a tutorial on the use of "caps" (on top)  but also while whining and obstructing 'good' progress, while waiting for a 'perfect' storm of funding.

Staffer B John Lee may be the luckiest elected official in Los Angeles. The entire team at Council agreed and conspired to save his ass after the unsurprising sexual harassment issues arose pre- #Metoo.  Waste Management and Greig Smith will always be credited with cementing Mitchell Englander and all of his shame cross CD12 and the entire public safety cluster.

Mitchell O'Farrell, is on a very short list of weasiliest council members in the history of Los Angeles.  He continues his journey up the so called "hind quarters" of the chamber, following on his tour of duty as chief of staff for CD13 before Garcetti established his enduring legacy: Most Toxic Mayoral [West Coast]  Next year we hope he'll illuminate the principles behind  his proposed Ban on "men" in public parks.  He may also be cited for Most lawsuits brought against taxpayers for his political stunts.

When Kevin DeLeon took the helm at CD14, he had some big shoes to fill.  He promised NEVER to run for mayor only to announced his Mayoral run last week. There hasn't been such a big talent in LA Politics since Herb Wesson was shown the door by Holly J. Mitchell.  Sheriff Alex Villanueva is a brother from another mother to... #timesup

Incumbent Protection Program:   Proposed nomination of LA City Clerk Holly Wolcott, for 'massive irregularity' and the sheer chutzpah of attempting to nix any paper copies of public meeting agendas. She should be arrested.

Maximizing the art of minimization:  Avak Keohtian of LA's Chief Legislative Analysts office.  Avak has been shrinking the public's understanding by the expansion of confusing details and liberal usage of 'accidental-on-purpose' typos/mistakes.

Matt Szabo could easily provide a lengthy talk  on ... sedition.  As one of the Mayor's longtime colleagues, his "See Something, Say Nothing" ethos has only been matched by his predecessors  Richard Llewelyn and Rick Cole.

Ron Galperin, could address the scoping of audits to reveal next to nothing while generating talking points that seem like 'accountability.'

Jaclyn Cosgrove of the Los Angeles Times could conduct a seminar on "omissions" in coverage to curry favor with municipalities.

Sal Rodriguez of the Daily News could secure a 'communicator of the year' award next time.

Nicole Davis Tinkham should be happy to discuss the Brown Act and how canceling a meeting last minute while providing no explanation, is in her world a ... best practice.

Would be fun to get Ron Galperin, Michael Feuer, Kevin DeLeon and Mark Ridley-Thomas to go round and round on this...

The great "highway robbery man" Paul Krekorian could address the doling out of huge settlements to attorneys who support his various campaigns, at home and abroad.

Garcetti, has been managing a toxic culture (while denying it's existence) for years, while also staying fit.

Rodrigo Castro-Silva the current LA County Counsel could easily lecture about how he has no idea what he's doing and merely taking direction from progressive icon STD advocate, Supervisor Sheila Kuehl, who was tamed by former Supervisor Michael Antonovich into one of the greatest deflavorizers of civic engagement in the history of the United States of America.

The County Board is very likely on the short list for next year's "Golden Bear Award" for egregious desecration of open meeting laws, including the ham fisted reduction by half of all regular meetings virtual or otherwise.

Most comprehensive denial under the Governor's order"

Garcetti will very likely medal more than once next year as his breathtaking five year and counting denial of audio recordings of HHH $1.3 billion dollar civilian oversight meetings is unparalleled.

Chiefs of Staff, Running for office in neighboring districts:

How to bank favors in one district in exchange for a failed run in another is ripe material for Karo Torossian of CD2 & Joan Pelico of CD5.