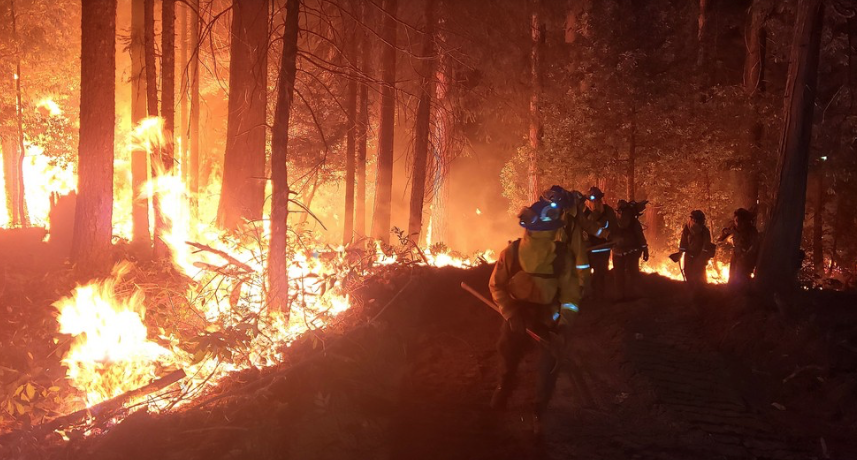 FIRE WATCH - One year after its aging equipment sparked a wildfire that killed four people in Northern California, Pacific Gas & Electric on Friday was hit with 31 charges, including 11 felonies, by a county prosecutor who cited the formerly bankrupt utility giant's "repeated pattern" of causing such conflagrations.

"[PG&E] failed to perform their legal duties. Their failure was reckless, it was criminally negligent, and it resulted in the death of four people."
—Shasta County DA Stephanie Bridgett

Shasta County District Attorney Stephanie Bridgett announced the charges—which include four counts of felony manslaughter—at a Friday press conference during which she said there is "sufficient evidence to prove beyond a reasonable doubt" that PG&E is "criminally liable for their reckless ignition" of the last autumn's Zogg Fire, which burned more than 56,000 acres, destroyed over 200 buildings in Shasta and Tehama counties, and killed countless wild and domestic animals.

The four people killed by the fire ranged in age from 8 to 79.

An investigation by the California Department of Forestry and Fire Prevention (Cal Fire) determined earlier this year that the blaze was caused by a pine tree falling on PG&E power lines during strong winds. Bridgett said Friday that the utility bore responsibility for removing the tree and that its own contractors had marked it for clearance in 2018.

"PG&E as a utility has both statutory and regulatory duties to mitigate fire risks by removing hazardous trees from around their electrical lines," said Bridgett. "In this case, they failed to perform their legal duties. Their failure was reckless, it was criminally negligent, and it resulted in the death of four people."

"These catastrophic wildfires that PG&E has caused not only have resulted in numerous deaths—eight in San Bruno, 84 in Paradise, and four here in Shasta County—they have caused countless respiratory health issues for communities that are forced to live day in and day out breathing unhealthy air," Bridgett continued. "There are serious long-term health risks from wildfire smoke exposure. That's why we have also filed numerous counts related to the unhealthy smoke emissions caused during the Zogg Fire."

"You may wonder why criminal charges against a corporation that can't go to jail," said Bridgett. "Well, because PG&E has a history with a repeated pattern of causing wildfires that is not getting better. It's only getting worse."

Last June, PG&E's then-CEO Bill Johnson pleaded guilty on behalf of the company to 84 counts of involuntary manslaughter over the Camp Fire—one of the most destructive wildfires in U.S. history—after the utility's equipment sparked the blaze that killed 84 people while destroying the town of Paradise and causing $16.5 billion in damage.

PG&E was also slapped with what critics called a paltry fine of $3.5 million—the maximum allowable by law—for its role in the blaze.

In order to avoid billions of dollars in potential wildfire liability costs, PG&E filed for bankruptcy in January 2019. The utility emerged from bankruptcy a year and a half later, placing $5.4 billion and over 22% of its stock into a trust for wildfire victims.

Earlier this year, PG&E also agreed to a $31 million settlement with Sonoma County and several of its municipalities for causing the Kinkade Fire, which burned nearly 78,000 acres and destroyed 374 structures.

Responding to Friday's charges, PG&E CEO Patti Poppe said that while the company "accepted Cal Fire's determination" that a downed tree caused the Zogg Fire, "we did not commit a crime."

At Friday's press conference, Bridgett said that it is time for PG&E to change, "and change does not come by doing nothing."

"Those that lost loved ones need justice. They need someone to fight for them," she asserted. "They need to have those that are responsible for killing their loved ones to be held criminally responsible, especially since this fire was completely preventable."

(Brett Wilkins is staff writer for Common Dreams where this story was first published.)