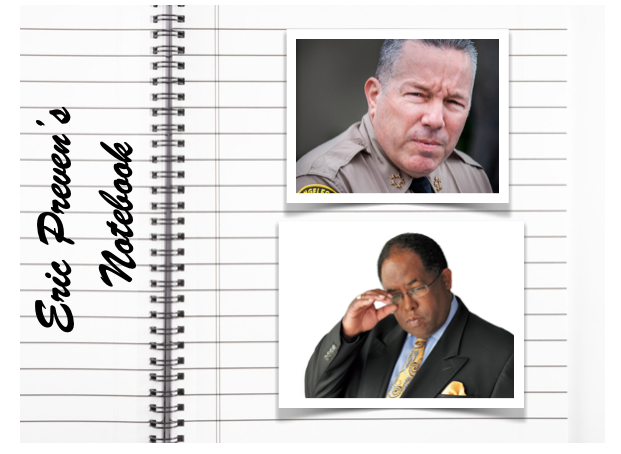 Independent: Max Huntsman, the Inspector General over the LA County Sheriff's Department dba "the dog who can't hunt" was on KNX announcing that Sheriff Alex Villanueva was planning to be a no-show at another scheduled Civilian Oversight shaming session.

The Sheriff had allegedly claimed that he was busy. His unwillingness to cooperate has been described as defiant of the 'subpoena.'

Meanwhile, his arch enemies and legal defense team (both) the County Board of Supervisors, cancelled their Tuesday Special closed session, late in the game by posting a bold Black cancelled imprint on an agenda that had already been posted.

Hard to understand why the meeting was cancelled and why the British English spelling of cancelled with two L's was chosen. While both canceled and cancelled are acceptable for the past tense of cancel, the version with one L is more common in American English.

Independent Oversight has to be Independent, right?

The Board was intending to discuss...

You'll notice there is very little there, there.

One renowned expert on shady closed-door agendas is the lame duck City Attorney, Mike Feuer, who has been running, not just at pace through rotunda at City Hall with furious residents in tow, but for Mayor alongside Kevin DeLeon and Karen Bass dba Mark Ridley-Thomas and Jessica Lall, also a woman of color.

This should give her the name recognition she wants and as one commenter quipped, "Finally Corporate-Americans will have a seat at the table of power here!"

Feuer was quoted in full pandering campaign attack mode, stating that if elected mayor, he would pursue a ballot measure to double the number of City Council districts — while also slashing the salaries of each council member.

The LA City Council to my recollection earns more money annually but not per hour than the LA County Board of supervisors-- each supervisor represents more than two million residents--ten million overall.  Yet, Feuer believes that the ratio of 1 to over 250,000 constituents per city council district fights meaningful representation.

It certainly feels like a ploy to get free media attention.

Rikers Island has been a festering wound in New York City for about as long as it has existed as a jail complex. Which is why so many years ago (10) when the Civilian Commission on Jail Violence [CCJV] was created by Zev Yaroslavsky, it shocked me to the core when Miriam Krinsky led a delegation of lawyers and investigators to check out their fine work.

I'm fairly sure it was during those CCJV hearings that I became devoted to exposing 'county irregularity' wherever possible.

On September 10, 2021 the agency in charge of administering health services at Rikers Island blew the whistle about an ongoing humanitarian crisis at the jail, which threatens the life and safety of both inmates and staff.

“They’ve given them plastic bags to use for feces and urine. And they’re sitting in the cells with their own bodily waste locked into these conditions.”

In the last eight months, 10 people have died in custody on the island, five of them taking their own lives. Efforts to address mass absenteeism have taken too long; has worsened over a period of months.  As critical jail functions break down, self-injury, medical emergencies, use of force and serious injuries are all on the rise.

And effort to clear out overcrowded pens where incarcerated patients languish for days; provide clinical spaces and healthcare staff and corrections staff must be provided or replenished, stat.

The mayor of New York Bill DeBlasio has not visited the island jails at all since winning his second term.

Have the Board of Supervisors been to Men's Central and Twin towers recently?  Also, where were they on Tuesday?

The tireless and windy efforts of the former Supervisor from Holly J. Mitchell's district and current LA city council member from district ten would agree with myriad platitudes amounting to more funding for data and study because "we cannot measure what we cannot measure" or something similarly half-inspiring.

BSCC staff reviewed instances of room confinement at the facilities between 8/20/2021 and 9/10/2021; the documentation she reports continues to lack clarity for placing the youth in a locked room at the actual time of placement, recommending that the Board find the agency noncompliant.

Information that would be needed to determine compliance, include "Room confinement documentation that clearly outlines the reasons for placement in room confinement that do not include punishment, coercion, convenience, or retaliation by staff. "

Certainly, the Supervisors and Council are well schooled in the fine art of retaliation, but room confinement should only be indicated, when indicated.   Also, lacking from the report:  BSCC staff felt documentation of individualized plans with goals and objectives toward reintegration to the general population are needed.

A man that I would call a friend passed away this week. I knew Willie Garson from television and life. His son who had some dealings with the Department of Children and Family Services before Willie adopted him played at the Studio City Recreation Center dba Beeman park and eventually went to Oakwood, where one of my kids went.

We saw one another mostly as parents on the sidelines. But we laughed our heads off, frequently.  Pancreatic cancer is clearly a mean motherfucker, but Willie had a great life and at the park from time to time we'll hear a laugh or spot a chap... and for a moment conjure his amazing spirit. RIP

Less personal, but fascinating to me, the man credited with inventing the Game of Life, Reuben Klamer, passed away at 99. "The game, introduced in 1960, reflected the values of the booming suburban culture: Players plodded along a conventional path that took them through school, work, marriage, children and retirement."   There must be more.

Something about life electrified Klamer, in the NYT obit,  "It is one of a very few things that every single person experiences, so the market, to put it simply, was literally everyone on earth!"   As times changed, so did the game  "with players encountering midlife crises and being rewarded for good deeds, like recycling the trash and helping homeless people."

A fundamental criticism of Life was noted by Jill Lepore in an article in The New Yorker, "the only way to reward a player was with money: "Save an Endangered Species: Collect $200,000  Solution to Pollution: $250,000."

But the Object of the Game is all too familiar:  Travel the path of LIFE making decisions, building a family, earning money (and paying some out too), buying homes* and collecting LIFE tiles.   Have the highest value at the end of the game and win.

At one point the game was second only to Monopoly in world wide popularity.  Sigh.

I guess, too much is never enough, when it comes to Life.

Magic mushrooms: An initiative to decriminalize psychedelic mushrooms was approved for signature gathering, moving the proposal closer to legislative approval, NBC News reports. This should help as we navigate the soul sucking drought.  Please conserve water, wherever possible.

The historic Squaw Valley ski resort in Lake Tahoe, the site of the 1960 Winter Olympics has been renamed Palisades Tahoe because “squaw” has been deemed by resort officials a “racist and sexist slur” whose use is “contrary to our company’s values."

A recent Brown Act case in Placer County, had the County approving a project for Squaw Valley Resort LLC to develop a resort on about 94 acres near Lake Tahoe. Sierra Watch, an advocacy group, challenged the County’s approval in two lawsuits.

Sierra Watch alleged the County violated section 54954.2 of the Brown Act, which requires counties (and other local agencies) to post an agenda at least 72 hours before each board meeting “containing a brief general description of each item of business to be transacted or discussed at the meeting.”

Sierra Watch also challenged the time frame under which a key public record was made available for public inspection.

The so-called Schwab Memorandum, the parties agreed, was a public record related to an agenda item for one of the Board’s open meetings and was distributed to all the Board members less than 72 hours before that meeting.

Under those circumstances the County needed to make the memorandum “available for public inspection” at the same time it was distributed to the Board members. (See § 54957.5, subd. (b).)

The question here is whether it did so.

The County, its Board, Squaw, and Squaw Valley Resort LLC (collectively, the respondents) argued it did, reasoning the County complied with section 54957.5 because it placed the Schwab Memorandum in an office where records are “available for public inspection” at the same time it distributed the memorandum to the Board — that is, around 5:40 p.m. on November 14, 2016.

Sierra Watch, in contrast, argues otherwise.  Because the memorandum was placed in the County clerk’s office after hours, it contends the County made the memorandum “available for public inspection” only when the office reopened on November 15, 2016.

The court found Sierra Watch had the better argument.  Richard Hopp requested that the decision be published and the court agreed.

The City Attorney of Los Angeles and Council's practice of circulating amending memos and motions among city council staff and members while instructing the public that they may access those documents sometime later, online, obviously falls short of the 'actually available' standard and requires careful consideration and may result in another challenge to the City's endless, shameful and sneaky behavior.

Fauble, get in here!

The 2028 Games Budget remains $6.884 billion. The sneaky committee meetings are quick, following the shameful Japan Olympics bottoming out. That said, it can't be that bad. Treasured partners NBC Universal claim they made money.  And the Universal Music catalogue just skyrocketed in value. So, great work!

Though, the outbreak of the novel coronavirus has continued to impact the LA28 negotiation timeline. Now, we're going to miss the October 1, 2021 deadline to have an agreement.  A brief extension is needed to finalize.  Extend to November 1, 2021   C-135291

We launched the LA28 brand!  Like the City of Los Angeles, it defies a singular identity.... the dynamic and ever evolving "A" in LA28.

They completed some key license agreements, and are in conversations with a # of potential commercial partners for sponsorship opportunities.

As of now, LA28 have the following insurance in place:

I'll be reaching out  to hear more about the crime/fraud coverage.

The City has the last available Form 10-990 and audited financials.   Please provide, Fauble.

(Eric Preven is a longtime community activist and is a contributor to CityWatch.)

The views expressed and content submitted do not necessarily reflect those of CityWatch or CityWatch writers.