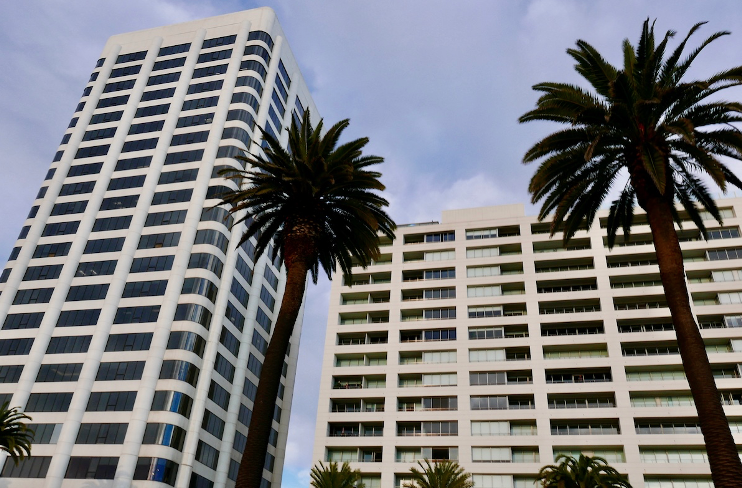 HOUSING AFFORDABILITY-In the final scene of the obscure 2004 sci fi action-adventure film “Sky Captain and the World of Tomorrow,” the heroes have tracked down the mastermind behind the unstoppable massive machines that are tearing up cities to steal power-generating infrastructure in the service of launching an improved human race.

When the mastermind is finally found, he is sitting at his desk, dead, having died 20 years earlier. In his lifeless hand is a scrap of paper with the words “forgive me.” His machines are autonomously executing his plan.

The Origin of the Densification Narrative

This storyline foretells what we are facing today with the rise of the Urban Growth Machine (UGM) as the State takes over city land regulation. The State has passed 100 or so pieces of land-use legislation since 2016 when it declared a 3.5 million point-in-time housing unit “shortage” that is entirely devoid of any quantitative expiration criteria. The declaration is essentially a permanent “solution” to a point-in-time, narrative-defined, “problem.”

As has been discussed in our prior columns, Santa Monica’s core housing issue is affordability, not quantity. Using the Southern California Association of Governments’ (SCAG) compilation of census and market data for Santa Monica, it required 8.42 years of annual median household income to buy a median-priced house in 2000. By 2018, that cost had doubled to 16.91 years. Such an increase is not the result of local wage growth among competing home buyers. Instead, it reflects the transformation of California residential real estate into a financially driven investment destination. The scarce housing supply investment element is desirable location (i.e., land). This is why the affordability issue is especially acute in Santa Monica with its highly desirable location on the coast, exacerbated by its status as a globally marketed tourist destination.

Perversely, state policy is increasing the severity of the affordability issue in two ways. First, the State terminated the redevelopment program, de-prioritizing affordable housing in favor of other initiatives such as a $100 billion high speed rail (which is now 3x over budget and benefits only an elite subset of California residents). Second, the State’s current “solution” is densification legislation such as SB 9 and SB 10 which provide expanded investment opportunities, driving an inexorable increase in housing costs and accelerating gentrification.

What Policies Can Deliver Affordability?

In high-demand urban, and beach-front, locales such as Santa Monica, affordability can only be achieved through subsidies. These subsidies do not need to be limited to new construction. Rental assistance programs for people who are housing-cost burdened would provide targeted affordability to those in the greatest need. Existing buildings in Santa Monica could be purchased and converted, providing immediate expansion of affordable housing within the existing development envelope.

Is Delivering Affordability a Priority?

It is not clear that actually delivering affordable housing to those in real need has ever been a priority in either Santa Monica or Los Angeles. Recent press in both cities has centered on the almost complete absence of structured, transparent, and accessible management of these necessary housing resources.

Local implementation of the Urban Growth Machine (UGM) agenda is proceeding apace. It is accompanied by a justifying narrative for the locals that is summarized in the preamble to the proposed Planning Commission Resolution Number 21-009 recommending that the City Council amend the City’s Official Districting Map to establish a moderate-income, affordable housing overlay district and amend the “A” Off-Street Parking Overlay District. The Planning Commission vote will be taken on September 24.

The key issue facing the city is set forth in the resolution’s preamble as the need for “affordable homes at prices below market rates.” The driver of this affordability issue is stated as the “housing crisis,” which implies a shortage of housing units. The only problem is that there is no housing unit shortage. The housing supply is more than adequate. And, with declining or flatlining populations at the city, county, and state levels over the past three to five years, it looks to remain that way.

The key mythology is repeated in the draft Planning Commission Resolution Number 21-009 and includes the following fallacies:

The 2020 Census data indicates that there were 6.8% more housing units in the state than there were households. The raw “housing unit per capita” statistic is silent on issues such as vacation homes and vacancies associated with household migration that vary from state to state.

At the current occupancy rates of 1.96 persons per housing unit, the vacant units represent available built capacity of 9,713 residents, or 10.4% increase of our current population.

The State land-use legislation, including SB 9 and SB 10, is focused on generating market-rate urban density, which is unrelated to housing affordability. Replacement of low-density single-family housing units with multi-family units is a key objective of the legislation. Unit construction driven by the RHNA process is focused on densification, which defaults to multi-family projects that are, perversely, family unfriendly. The state’s benchmark for density in Santa Monica is 30 units per acre. This equates to 161,472 units, which is 3x the total number of existing housing units in the city. The usual explanation is that dividing up expensive lots across more units decreases housing costs. In reality, the per-square-foot cost of the living space increases significantly. Part of the increased cost is the loss of yards for families. This cost can be seen in families’ decisions to incur the costs of commuting in order to be able to afford homes with such open space. Multi-family units currently comprise 78% of Santa Monica’s housing inventory.

The growth of housing in high-fire prone areas is driven by the economics of new land supply creating affordable low-density single-family homes.

Moreover, poverty, homelessness, or the precursor homelessness of cost burdened households are all issues of affordability that is are entirely unrelated to construction and densification. As densification is directly related to gentrification, increasing density will only exacerbate the affordability crisis in high-demand urban and coastal areas. Moreover, densification not only fails to address the underlining drivers of income disparity and the decimation of the middle class, but it also feeds off those disparities.

It is not possible to establish causal links for locational homelessness given the absence of ongoing, comprehensive, and statistically valid demographic data. As such, it is not known what Santa Monica should actually be planning for. In the last published (2017) Santa Monica report on homelessness that included anecdotal statistics, the City noted that up to 61% of the homeless had been in Santa Monica for a year or less and that only 3% to 5% were native to Santa Monica.

California housing production has kept pace with population increases. In 1960, there were 2.90 persons per housing unit. In the 2020 Census, that number declined 5.5% to 2.74 despite a 150% increase in population during that 61-year period. In Santa Monica, the statistic is 1.78, 35% below the state average.

The 3.5 million housing unit target was constructed by McKinsey in October of 2016 based on no more than a simple extrapolation of New York and New Jersey densities. There was no California-specific analysis beyond this extrapolation.

Separately, the non-partisan federal agency, Freddie Mac, performed state by state analyses in February 2020 indicates a high-end requirement is 820,000, which is entirely achievable over the next 8 years at current build rates.

Finally, there is no support for the assumption of population growth. California, Los Angeles County, Los Angeles City and Santa Monica have all experienced flat or declining populations over the past three to five years.

“The RHNA allocation will require the City to permit approximately 1,000 housing units annually between 2021 and 2029, 700 of which are required to be affordable housing, representing an increase of approximately five times over the City’s RHNA allocation for the 5th Cycle (2013-2021) Housing Element.”

The underlying assumptions in the Southern California Association of Governments (SCAG) report that allocates the RHNA target expressly quantifies the organic SM requirement at 1,156 units with the remaining 7,739 units (87% of the total) reflecting the relocation of residents from existing housing in communities surrounding Santa Monica.

The absence of any rigor in the process is evident in the wild fluctuations exhibited in drafting the Santa Monica requirement. Using highly flawed macro data with no local research, the state originally was to require that Santa Monica produce 4,829 units with 3,673 being affordable. This jumped to 8,895 (+84%) after the Los Angeles-based development-dedicated lobby group Abundant Housing LA (AHLA) sent a legal letter to the state demanding yet more unsupported changes to the methodology.

AHLA has acknowledged that there is no fact-based support for the 8,895-unit 6th Cycle RHNA allocation. On page five of their March 30, 2021, letter to the City Council lobbying for specific outcomes in the Housing Element, AHLA specifically requests that the City’s Planning group not rely on SCAG’s analysis because it is inconsistent with local data for housing-unit level analysis. Yet, the entire SCAG RHNA allocation methodology was based upon the non-local data from the start.

With no funding identified for the construction of affordable units, it appears the State is relying on the intimidation tactic of financial penalties, state attorney general lawsuits and potentially the direct takeover of city planning to coerce cities pay for these unsupported and unjustified unit requirements.

The densification agenda will transform our city, but certainly not in the ways being idealized. The building (and damage) will continue long after all these mythical narratives are forgotten. The recent eight-year increase in annual pay required to buy a house since 2000 is not enough. It will never be enough. Rents will follow twenty-four months later as the Dallas Fed discovered in their 2021 analysis of rents and house prices. Unlike “Sky Captain and the World of Tomorrow,” there will be no note from the densification proponents asking to be forgiven when the concrete realization becomes apparent that neighborhoods, communities, and resources have been irreparably harmed by uncontrolled “by right” development and densification that only serves financial interests.

Residents can stop this madness. An upcoming grass roots ballot initiative to prohibit state involvement in local land use has been submitted to the state by Californians for Community Planning Initiative. They can be found at www.communitiesforchoice.org.