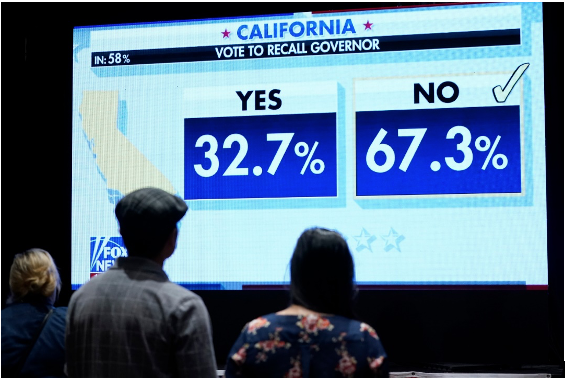 With 70 percent of votes in,  63.9 percent voting against a recall and just 36 percent in favor. Although challenger Larry Elder and his campaign threw out baseless fraud allegations in the weeks leading up to the close of balloting, he ended the evening with a concession speech and call to his supporters to be “gracious in defeat.”

While pundits have described the results as an “indictment” of Trumpism, Governor Newsom doesn’t appear to be quite as resolved. In his victory speech, he warned supporters, “I said this many, many times on the campaign trail; we may have defeated Trump, but Trumpish is not dead in this country. The big lie, the January 6 insurrection, all the voting suppression efforts that are happening across the country. . .the assault on fundamental rights, constitutionally protected rights, of women and girls. It’s a remarkable moment in our nation’s history.”

Nevertheless, the current GOP and Trumpism appear to face rather serious contention in California. Voters in traditional Republican bastions such as Orange, Riverside, and San Bernardino, and  rejected the recall, albeit by a slighter margin than statewide. Voters in Ventura County voted 59.5 percent against the recall. In Los Angeles County, the margin was much greater, with over 70 percent voting against the recall.

In a recent CNN poll conducted by SSRS, a majority of Republicans and Republican-leaning independents surveyed said that former President Trump should be head of the party. Half of all who were surveyed saw the Republican party as “too extreme.”

For over 25 years, California has been a solidly blue state. Currently, registered Democrats outnumber registered Republicans almost two to one in the state, according to the Public Policy Institute of California. In surveys over the past few years, likely independent voters tended to skew Democratic (52 percent Democratic vs. 36 percent Republican).

In contrast, Larry Elder, a vocal supporter of Trump, was the clear frontrunner among the long list of challengers. Statewide, Elder received almost 46.9 percent of those who submitted a replacement vote. The closest candidates, Democrat Kevin Paffrath and Republican Faulconer received 9.8 percent and 8.6 percent of votes, respectively.

How did a libertarian conservative who opposes mask and vaccine mandates, reproductive rights, and opposes measures to address climate change end up sweeping the replacement vote?

For 27 years, Elder has established and maintained his “brand” as a radio provocateur, slinging attacks against Democratic office holders and liberal policies. Among a crowd of 46 challengers, he spoke the most loudly, garnering media attention on both sides of the aisle.

Prior to Trump’s impact on the Republican party, a more centrist Republican candidate like former San Diego Mayor Kevin Faulconer might have been more appealing to Democrat and independent voters. The conservatives’ embrace of Elder became a double-edged sword. While Elder undoubtedly captured interest and the lion’s share of votes but he also provided a focus for Gov. Newsom.

The recall election was no longer pinpointed on recalling the governor but on avoiding choosing a replacement  who has been described as “to the right” of Trump.

Eighteen years ago, a gubernatorial recall election brought different results. Gov. Gray Davis became the second governor in history to be recalled and the first in California. A total of 135 candidates had qualified for the ballot, but only four candidates ended up receiving at least one percent of the votes, Lieutenant Gov. Cruz Bustamante (D), 2002 Green Party gubernatorial candidate Peter Camejo, State Senator Tom McClintock ®, and actor Arnold Schwarzenegger (R).

In 2021, the California electorate looks quite different than it did in 2003. California has voted for Democratic nominee in every presidential election since 1992. The Democrats have made gains with white college-educated voters since the early 2000s, and, as with the country, California’s demographic  has become younger and more diverse.

The recall election was essentially launched around Gov. Newsom’s response to the COVID epidemic. However, according to a YouGov poll, 58 percent of likely voters approved of the governor’s response.

Elder is No Schwarzenegger

No matter your opinion of former Gov. Schwarzenegger, in 2003, was well-liked by a majority of Californians. Almost 80 percent of registered voters surveyed in a Gallup poll had a favorable opinion of the actor. He also held what we consider more moderate views on some issues. He supported abortion rights and stricter gun control laws, for example. This is in stark contrast to Elder.

This was a different election with very different results.

In 1911, California approved Article II of the California Constitution, providing citizens with the ability to recall and remove elected officials and justices of the State Supreme Court from office. There have been 179 recall attempts since 2013. The first and only successful gubernatorial recall was of Gov. Gray Davis in 2003.

Three of four voters in UC Berkeley’s Institute of Studies poll published on September 13 were in favor of recall elections but supported significant reform, including increasing the number of qualifying signatures from 12 to 25 percent, raising the threshold to be met as a replacement candidate, and requiring signatures from throughout the state.

South, who managed both Gray Davis gubernatorial campaigns and was a senior advisor to the governor, wrote that the “Democratically controlled Legislature needs to seriously address deficiencies in the recall process,” citing that “two of the last three Democratic governors will have been subjected to a recall within 18 years. The main reason: California Republicans can’t win a gubernatorial election outright, so they are using the recall as a backdoor alternative.”

Require more signatures: Of the 19 states that allow gubernatorial recalls, most require signatures between 25 to 40 percent of voters who voted in the previous election to qualify for  recall. California’s requirement is just 12 percent of the voters in the last gubernatorial election. South writes the threshold for valid signatures should be 20 percent, to “conform with the recall provision for legislators and judges, and to fall in line with other states’ procedures.”

Toughen allowable provisions for a recall: In most states with recall provisions, specific grounds must be present, such as criminal acts by an incumbent or malfeasance in office. California lacks this provision. He believes the Legislature should lay out “for cause” reasons.

Establish bipartisan requirements: South points out 64 percent of the 2.1 million “unverified signatures” that had been collected for the Newsom recall were Republicans, according to backers of the recall. Only 9 percent or .018 percent were Democrats. To lessen the likelihood one party will exploit recall provisions to remove elected incumbents, South recommends an established percentage of signatures should come from the same party as the incumbent.

Increase filing requirements: South writes filing requirements should be increased beyond the current filing fee and “ridiculously low number of voters’ signatures—65 to 100.” Currently, aspiring candidates can collect 7,000 valid signatures to bypass the fee. South says every candidate should be required to “collect this or a similar level of valid voter signatures” to show support.

Takeaway from an Expensive Recall Election

As many of us let out a collective sigh of relief, we need to convince our state legislators to establish recall criteria more in line with other states to lessen the abuse of the recall option as a “backdoor” way to position candidates into offices with a very slim margin of votes.

(Beth Cone Kramer is a writer and a contributor to CityWatch.) AP Photo/Ashley Landis. Prepped for CityWatch by Linda  Abrams.