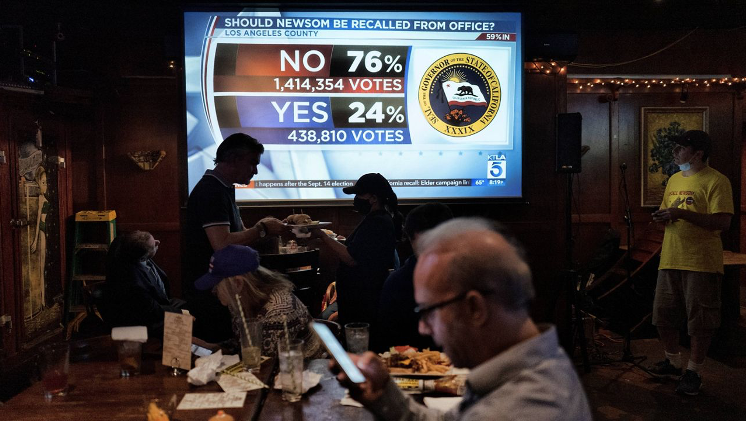 A VIEW FROM HERE - The recall was an overwhelming rejection of the person of Larry Elder.  Elder is an annoying blowhard who had never run anything other than his mouth.

The sole reason the Recall was ever close was the May 13, 2021 statement by CDC Director Rochelle Walensky that vaxed people could go maskless, but others had to wear masks.  May 17, 2021, CityWatch, How the CDC Stabbed Joe Biden in the Back Walensky’s statement was 100% against science since the CDC knew that the Delta Variant was much more infectious.  The CDC, thus, re-ignited the battle between the makers and anti-maskers between the vaxers and the anti-vaxers.  As a result of this political ploy to destroy President Biden’s centrist approach of everyone mask up until we reach herd immunity on July 4th, the nation had the Fourth Surge.

Because the Walensky Surge, as the Fourth Surge should be named, undercut Governor Newsom’s number one achievement, i.e. his handling of the pandemic, the Recall temporarily became too close to call.  Then, Larry Elder rescued Gavin Newsom.  In the GOP where extremism is a virtue, Larry Elder had a head start on the other GOP wannabees.  Elder promotes a minimum wage of Zero Dollars. He thinks protecting the public health from a deadly pandemic is not the government’s job.  Except for his right wing fans who are filled with rage and anger, Elder is an obnoxious ignoramus.  The more voters heard that Elder would be governor if the Recall succeeded, the more people opposed the Recall. Gavin Newsom is not disliked by Californians and when they realized it was a choice between Newsom and Elder, they rejected Elder.

A gazillion things can happen between now and the 2022 election, but one distinct possibility is Woker Quicksand.  California Senate Bill 9 and Senate Bill 10 are more unpopular than Larry Elder. In a race between state Sen. Scott Wiener and Larry Elder, Larry Elder might win.  Sen Scott Wiener represents California 11th district which includes all of the city and county of San Francisco, Broadmoor, Colma, Daly City, as well as part of South San Francisco.

Scott Wiener’s claim to fame is his on-going effort to destroy single family homes in California.  Up to 71% oppose SB 9 and 75% oppose SB 10, but Wiener and other Wokers are true believers.  Similarly, federal judge David O. Carter, who presides over one of the homeless court cases in Los Angeles, believes the insane hokum behind SB 9 and SB 10 that white racism has caused Blacks to be homeless.  Thus, the solution is to build housing projects in single family neighborhoods.

Just as a form of insanity seized the GOP party when it elevated Donald Trump to its Presidential candidate, the Dems have gone off the deep end with their non-stop Wokerism.   Woke originally meant an awareness that today’s institutions reflect yesterday’s values and thus contain features which  are disadvantageous to minorities. (Wokerism is the fraternal twin to Critical Race Theory). Wokerism has morphed into an anti-White racism where white people are the cause of all the world’s ills.  White people must show penitence and pay slavery reparations.

Wokerism is the product of Nancy Pelosi’s highly divisive Identity Politics where a person’s membership in a particular group is far more important than the individual.  By virtue of having light skin, all white people owe all Blacks.  Wokerism twists itself into extreme formulations such as Scott Wiener’s senate bills to destroy single family (white) neighborhoods.

One should not confuse Black Lives Matter (BLM) with Wokerism.  Most BLM members want to root out the predatory aspects of our institutions and in so doing benefit everyone without regard to race, creed, color, etc.  BLM follows Thomas Jefferson, Abraham Lincoln, and Martin Luther King to bring about a nation where each individual can say “Free at Last.”  BLM is being sidelined by the Woker Dems because Woker Group Rights based on race makes for a mass movement over flowing with campaign dollars.  It thrives on dividing minorities against whites, and in this respect the Woker Dems are in league with the GOP Trumpists who promise to protect White America from the minority take-over.  April 8, 2021, CityWatch, Hate Money Stalks America.

The fires of rebellion are being lit in Los Angeles.  Extreme Woker, Nithya Raman, the new councilmember for Council District 4, proposes an ordinance to build poor people projects in single family neighborhoods.  She is taking this outlandish position, even after a Recall has been already been launched.  She bases her Wokerism on a totally false narrative, i.e., people are homeless because (white) people live in single family homes.  Thus, the solution to homelessness is to construct homeless projects in each single family neighborhood.  Raman is Wiener but on a local level.  Raman’s constantly repeats the false narrative that our homeless crisis is because we have not built enough affordable housing projects.  The reality is that Garcetti’s Manhattanization mania has torn down more than 25,000 rent controlled units. If none of the rent controlled apartments had been destroyed, we would have more affordable housing than we have homeless people.

Let’s be logical – the failure to construct poverty projects did not make people homeless. The destruction of poor people’s homes made them homeless.  Presently, Los Angeles has over 110,000 vacant market rate apartments and homes.  Rather than allow poor people to live in them, we hire police to keep poor people from moving into the vacant places, while the city tears down more rent controlled apartments.

Newsom listens to advisers from his home base of San Francisco where Scott Wiener’s Wokerism is strong.  By the time of the June 7, 2022 Governor’s primary, there is a reasonable likelihood that Wiener-Raman Woker attack on Los Angeles’ single family neighborhood will have replaced Covid-19 as the pivotal issue.

All the GOP, and all the Dem, and anyone else run in one huge race. The two top voter getters then move on to a run off election on November 8, 2022.  Thus, we could have two GOP candidates running for Governor or two Dem candidates or no GOP and no Dem.  The only certain thing is that any candidate who supports Woker destruction of single family neighborhoods will be extremely unpopular in Los Angeles.