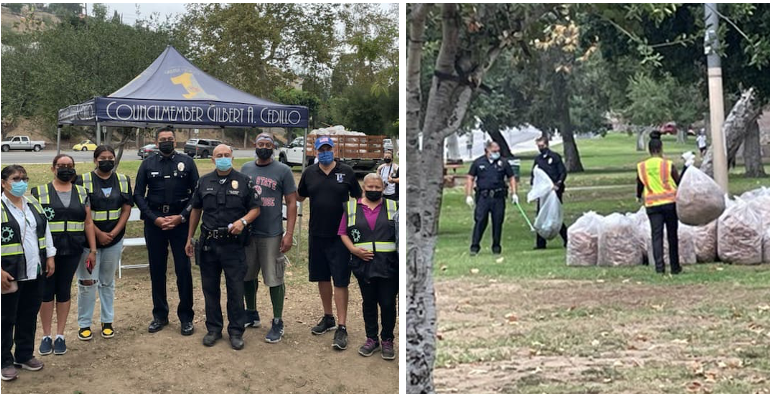 EASTSIDER - It’s no secret that LAPD officers are bailing from the job and are not being replaced.

This is due to the lack of leadership in their command structure, as well as being bounced around by 15 LA City Councilmembers who all think they’re running fiefdoms. The councilmembers in CDs 1, 13, and 14 seem to use LAPD officers like party favors, instead of letting them do their job.

In a couple of solid recent Daily News articles, the problems are presented clearly. In Josh Cain’s August 6 article, he lays out last year’s shrinking of the force:

In a report last week to the LA Police Commission, Moore and other LAPD commanders outlined the problem facing the department. In just the 2020-21 fiscal year that ended in June, LAPD saw 631 police from all ranks leave the department, many through retirement.

That was nearly 100 more than left LAPD in the prior fiscal year. From fiscal years beginning in 2016 to 2019, the average annual number of officers leaving the department was 466.

And in an August 20 article, Jonah Valdez goes over the effects of all this:

The department had 486 fewer officers than it did this time last year, according to LAPD reports. In addition to the 296 posts being filled, it had 144 more officers than it was budgeted for and 46 other officer positions that since have been carved out of the force’s budget.

Part of the reason for the 296-strong gap the chief wants to fill is that 631 sworn personnel across the ranks left the department last fiscal year, for retirement, job change or other reason including 2020’s civil unrest that left some frustrated or weary.

Moore has previously said many among the department’s ranks are worn out and were looking for other employment options outside law enforcement, a trend experienced in big-city departments across the United States. And, over the past five years, a quarter of the resignations have come from officers with less than five years on the job.

Among those who have left the LAPD were women and Black officers, which already had been hiring and recruitment priorities for a department looking to diversify its ranks and improve its relationship with communities of color.

As a source who wants to remain anonymous recently told me, the overall morale within the LAPD can best be described as “in the toilet.” Most of the rank and file have lost confidence in LAPD's current Chief of Police, Michel Moore.

During these past few months, we have seen an escalation of violent crimes, a classification which encompasses shootings (most being gang related), assault and batteries, and also an increase in property related crimes. Let’s not forget about the massive increase in auto accidents (collisions).

Much credit must be acknowledged to the regular Northeast patrol officers and especially to the Northeast Gang Unit in their attempts to combat violent crime in our Northeast area.

Here’s a brief list of violent crimes which took place in recent months in our Northeast area:

August 23  --  Two males shot in Cypress Park one of which died.

Note: This list does not include all of the shots fired calls which have been confirmed.

During this time of COVID, most have done very little to earn their pay. Many during the George Floyd protests were reassigned to patrol duties. But then there were those assigned to the Community Relations unit that just sat at their desks and did nothing.

The Cadet programs and other youth programs were all placed on the back burner.

In fact, back in January 2020, CD 1 Councilmember Gil Cedillo's office obtained a $500,000 grant to implement a foot beat made up of two police officers (Senior Lead officers) on the North Figueroa Corridor in Highland Park. This new foot beat only lasted a couple of months. It was shut down because of COVID. Now I ask, where is the money? On a regular basis and more so during this pandemic, there have been thefts of local businesses, assault and batteries in this Figueroa corridor in Highland Park. LAPD response time has been poor, and many businesses no longer even call the police.

Why didn’t Captain Art Sandoval reassign his Senior Lead officers to the foot beat position after seeing the increase of crime in this area?

Just take the time and ask all of the businesses on North Figueroa, Eagle Rock Blvd, Colorado Blvd, Glendale Avenue and York Blvd. when was it that you had a Los Angeles Police officer walk into your place of business and inquire how are things going? What can I do to help?

The morale at the Northeast station can be called way below the water level of a toilet. A least four requests of Internal Affairs Investigations have been submitted to the Command Staff, including Chief Moore, over serious allegations of misconduct which named the current Captain 111 Art Sandoval of the Northeast Division as the subject of those investigations. Captain Sandoval is due to retire effective January 31, 2022, and many rank-and-file officers can't wait. They are planning a major celebration once he is gone.

Are SLO’s Worth It?

Given the massive increase in violent crime in our Northeast area, let’s look at the role played by Senior Lead Officers assigned to Northeast. What have they done to assist in the suppression of this crime wave?

The answer? Very little, if anything.

On August 21, the Senior Lead officers assigned to the Northeast Division decided to join the  Community Police Advisory Board group who invited as many as ten members of the Church of Scientology to “Rake up Leaves” (see photo above) at the Sycamore Park located on North Figueroa. This was to be followed by a barbeque for local community residents. According to those in attendance you were lucky to see at least five outside community members who stopped by to partake in the hot dogs and chips.

This event can best be classified as a major joke and a complete failure. One community resident, a former member of the Highland Park Neighborhood Council, sent updated photos prior to this community cleanup event of gang graffiti painted on various buildings located in the park. But the gang graffiti was not removed. In reality only employees of the City of Los Angeles Parks and Recreation can legally remove gang graffiti and re-paint the building structures. Did anyone from CD 1 take the time to review what volunteers and police officers can legally do surrounding cleanup events in a city-owned park?

Captain Art Sandoval attended this failed community event as well as recently promoted Deputy Chief Al La Brada. Remember, this is the same Deputy Chief who played with his cell phone while the community’s victims of the failed detonation of the illegal fireworks on East 27th street and San Pedro  shared their horrific accounts of that day.

Can you imagine LAPD officers being paid to rake up leaves in a city owned park? What a waste of taxpayers’ dollars. What does the union have to say that represents the employees of the Los Angeles Parks and Recreation? Can you just hear the lawsuits? What was Sgt.1 Caesar Rivas, who is currently running the Community Relations Unit, thinking of? Many folks state that he has his head up the back side of Captain Art Sandoval.

Prior to  September 1, 2021, concerned residents of the Northeast Los Angeles area decided to have a vehicle caravan that would travel up and down Colorado Blvd on September 1. The objective was to inform those individuals who travel on Colorado Blvd of the fact that the Los Angeles Metro wants to remove one lane of traffic on both the eastbound and westbound lanes on Colorado Blvd. The intent of this caravan was also to educate the public about the future traffic congestion that would result from removing the two traffic lanes.

CD 14 Kevin de León’s staff member, Sarah Flaherty, contacted the organizer of this caravan event and told them that they had to obtain a permit to stage the event and if they failed to do so, LAPD would cite each driver for violation of the noted vehicle code. It’s interesting to note that the required permit would cost $300 and the CD 14 staff could request that the permit be denied. It is not a secret that CD 14 Kevin de León supports the removal of the traffic lanes on Colorado Blvd. It’s all about money for union employees. De León is bought and paid for by unions.

What is also interesting is that, with the increase in violent crimes within the Northeast Los Angeles area, not less than five marked police vehicles were present on Colorado Blvd. on September 1. Most of the marked police vehicles were occupied by LAPD Northeast Senior Lead Police officers. Parked on the Eagle Rock City Hall driveway was Senior Lead officer Lloyd Chang. When asked why he was there, he responded he wanted to make sure there were no traffic accidents. When he was told that is the responsibility of LAPD Central Traffic Bureau he did not respond. Note that he got out of his marked police vehicle and stood on the driveway area of the Eagle Rock City Hall for over one and half hours communicating with other folks present. What a way to earn a living at taxpayers’ expense.

On September 1, LAPD’s Northeast Division issued a wanted bulletin on a suspect vehicle that may have been involved in two drive-by shootings, one in which a person was shot. However, when Senior Lead officers were asked about this LAPD Northeast wanted bulletin, most replied what are you talking about?

At least four or five of the current LAPD Northeast Senior Lead officers are on the DROP program. Isn’t it time for them to be removed from their current positions and sent back to patrol duties where they can earn an honest living?

Here’s a recent example of how CD 1’s staff is making the streets safer for our residents:

A recent flyer was posted for an August 21 event at Sycamore Grove Park, with the following important title: Community Clean Up and BBQ after with your Senior Lead Officers!

I have provided a link to this flyer here.

Right now, we have no Mayor (not that we had much of one when Garcetti was around), and 15 City Councilmembers who run their own shows like they’re mini-Mayors. It’s time for them and the Council President to step up, do their job, and allow law enforcement to do their job in protecting us all – particularly in Northeast LA.

(Tony Butka is an Eastside community activist, who has served on a neighborhood council, has a background in government and is a contributor to CityWatch.) Edited for CityWatch by Linda Abrams.