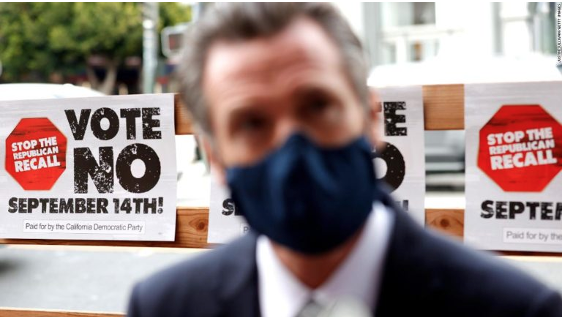 COMMENTARY-Yes, everyone can vote for a replacement governor on the recall ballot, but should they?

I started to write about the election with the intent of identifying the best of the rest so that if the recall won, we wouldn’t have a loser as the head of our state from October 22, 2021, to January 2, 2023.

After all, a replacement Governor would have the power to appoint judges, make executive orders and veto or just refuse to sign bills that have passed through the State legislature.

Sad to say, I was less than impressed by the wide field of candidates. You might think that out of 47 people running for office to lead California, there would be a few credible contenders. But no.

As an advocate for public health, in good conscience I cannot endorse anyone opposed to strong mask mandates and other restrictions to protect every Californian. This rules out a majority of those listed on the second portion of the ballot.

In fact, I’ve been disappointed that Gavin Newsom, after a good showing at the commencement of the pandemic, was swayed by the arguments of those whose views were about short-term profits without looking at the long-term losses – both fiscal and personal – of the extension of the health emergency due to such an early ending.

Next, I happen to identify as a woman. But even if I didn’t, I would not support leadership by anyone who considered half the human race to be less important whether through religious teachings or by waving a gun at one’s girlfriend. Bye-bye to the pastors and Larry Elder.

The Libertarian point of view – that personal liberty is the most important political value, that individuals should be free to make their own choices and others must not interfere – is not tenable in today’s world where our lives and the planet’s future are inextricably entwined.

Sorry, Jeff Hewitt. Sorry, Nickolas Wildstar. We need to be our brothers and sisters keepers and strong stewards for Mother Earth.

Of the remaining candidates, more than a few are fringe elements or have platforms that would have mainstream Californians questioning their intellectual capacity and fiscal integrity.

Ultimately, California has a large and diverse population and an economy that ranks fifth in the world. However well-intentioned, is it responsible to place it in the hands of a neophyte?

Reagan may not have had years in the legislature when first elected governor, but he had built a network of political connections before he ran for office and had years of experience as head of the Screen Actors Guild and as a conservative commentator.

And that was at a time when the world was far less complex and the threats to our future far less dire.

The most frightening premise of this entire recall procedure is that a very small minority of Californians will play kingmaker at a time when our whole world is at risk.

And because of the structure of the recall and the fearmongering into which our election process has deteriorated, this tiny minority is far more likely to exist at the outmost fringe of California society today.

Leading to the very real possibility that the placeholder governor may be very much at odds with the interests of the vast majority of Californians.

Like the filibuster in Washington, we are subject to the vagaries of an exceedingly undemocratic election whereby a small minority rules and the rest of us will suffer.

The solution: vote NO on the recall.

If you don’t like what Newsom is doing, make sure you vote in the state primary – it’s only nine months from now – and the result will be far more democratic than this bastardized balloting could ever hope to be.

(Liz Amsden is an activist from Northeast Los Angeles with opinions on much of what goes on in our lives. She has written extensively on the City's budget and services as well as her many other interests and passions. In her real life she works on budgets for film and television where fiction can rarely be as strange as the truth of living in today's world.) Prepped for CityWatch by Linda Abrams.