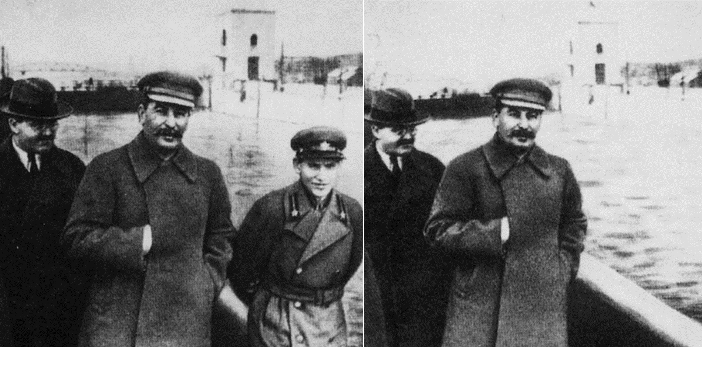 GELFAND’S WORLD--It's a striking pair of photos. Here is Nikolai Yezhov standing next to Joseph Stalin as they view a Moscow canal. [photo 1]

And now a later version of the same photograph, but with Yezhov carefully airbrushed out of the picture. It is as if he had never existed. [photo 2]

That's the way it went in the world of the authoritarian mind and its handmaiden, the Party Line.

To take this discussion to the present day ---

I've been listening to a bit of talk radio over the past few evenings in the attempt to hear how the loss of the presidency and the senate would be treated by the far-right wing. (Will they continue to pound on the Big Lie that Trump was cheated of his election victory?) Curiously, what I eventually heard was different than I expected.

Keeping in mind the ability of Soviet airbrush artists to do what Photoshop does nowadays, let me toss out one more historic memory. It's from before my time, but involves some of the same set of characters. In the history books, it is remembered as the Molotov - Ribbentrop Pact, which was agreed to on August 22, 1939. It was a surprise to a lot of people, in that Hitler's minister and Joseph Stalin signed an agreement of nonaggression against each other.

Of course the world remembers this pact as the beginning of the partition of Poland into Soviet and German areas. It wasn't until quite a bit later (June 22, 1941) that Germany turned around and invaded the Soviet Union, an operation that ultimately led to the German loss in the war.

As a baby boomer, I got to hear a lot from the parental generation about the years leading up to the war, the war itself, and even their upbringing in families that had come over from the old country. My people had settled in Chicago, so I got to hear about the roaring twenties, the depression, and the war. And if your people lived in Chicago, they were likely to have known people who ran booze for the mob, and what is of interest in this discussion, they knew at least somebody who was a member of the Communist Party USA (CPUSA).

Like other families who had an uncle who was weird to the point of embarrassing behavior, my family had some distant relative -- I think it was the brother of a grandparent or thereabouts -- who was the real thing, a real live communist who lived the life and spoke the party line.

Now as a kid, you didn't understand the subtleties of the Molotov - Ribbentrop Pact but in my early upbringing, I became aware that Naziism had existed, that there had been a massive war, and that at one point the Nazis and the Russian communists had a moment where they got along. And I also learned that American communists (including the distant relations) had trouble dealing with friendship towards Germany. After all, they were a group who had been trained to be anti-fascist (and anti-capitalist) for most of their adult lives.

But here's the problem that the CPUSA members faced: They also had been trained to be obedient. They had to go along with the party line -- that is to say, the official pronouncements that their Stalin-era masters told them.

So here they were in August, 1939, suddenly stuck with a 180 degree switch of policy regarding Naziism. And they were supposed to support the new policy.

Because that was the Party Line.

We also have to understand that obedience to a Party Line is not limited to old Stalin-era communists. It is characteristic of cults of all types, whether it is Jonestown or something else. It is the characteristic of people who have fallen into the authoritarian mindset.

The big switcheroo on American soil

It was jarring to listen to the talk radio jock the other night, because he was -- perhaps unbeknownst even to himself -- engaging in exactly the behavior that the Soviet-Americans were attempting back in 1939. It was the choice of topic that was the giveaway. Was this radio shock jock doing one more attack on AOC (the congresswoman) or on Joe Biden? Not in this segment.

Instead, this guy was going on at great length about what a pathetic figure Mitch McConnell is. I can understand how you might want to disagree with McConnell's remarks blaming Trump for rousing the crowd against the capitol on January 6. There certainly were a lot of people who supported Trump and wanted congress to pull a rabbit out of its collective hat and reverse the result of the election. And in that tumult, McConnell (along with 92 other senators I might add) voted against the election reversal and in support of Joe Biden's electoral victory. Some sort of nuanced analysis could have been done in which McConnell's differences with Trump could have been discussed, perhaps with some predictions about this would affect conservative politics over the next couple of years.

But the radio announcer wasn't doing that speech.

Instead, it was the rewriting of history (at least from the Republican standpoint) that I was hearing over the radio the other night. This announcer wasn't just attacking McConnell's speech against Trump. He was attacking everything that McConnell had ever been and had ever done, all the way back to (and including) McConnell's blocking of Merrick Garland's Supreme Court appointment. Here is the guy who was the most important Republican during the Obama years and Trump's most important servant during the Trump presidency, and he was being talked about in scathing terms.

And then I understood. Mitch McConnell is to be erased from history, as if he had never been the nation's leading Republican or Trump's trusted ally. In this new moment in which Trump is fighting from a position of political limbo, it's apparently more important to get on with the purge of everyone who has been -- in the least bit -- disloyal. And in this authoritarian cult, Mitch McConnell engaged in the political sin of speaking ill of Donald Trump.

So while I was driving home, I got to hear an extended monologue detailing Mitch McConnell's shortcomings including his looks, personality, and lack of political ideology.

And I came to realize that what I was hearing was less akin to a modern day political scrape, and more akin to what we remember from the days of Joseph Stalin.

Think about those two photographs, one with the commissar Nikolai Yezhov big as life alongside Joseph Stalin. Then, after Yezhov had been purged (and executed), the Party Line demanded that he had no longer existed.

Is this what Trump and his apologists intend for Mitch McConnell? I don't think that Trump has the mental facilities or determination to be the next Stalin, but in Trump's murky thoughts, it's important to express anger against the McConnell speeches by destroying him politically. By destroying him utterly.

You notice the same sort of Party Line thought when it comes to Dr Fauci. Here's a guy who is basically an epidemiologist, somebody who worries about vaccine development and safety, and lately was given the unfriendly task of overseeing an epidemic while lacking the proper tools. And he walked into this situation during a moment when Trump was wavering as to how the situation would be treated from a political standpoint.

Trump chose to take a positive, highly optimistic approach early in 2020. That's not too surprising considering that it was an election year. But he had a problem in that the optimistic approach came into conflict with what his staff (like Fauci) were telling him. And then came the reality of the case totals and deaths. Fauci kept calm and remains popular among the American public, which presented another problem to the Trump apologists because Fauci started telling Americans to wear masks (when we finally had enough) and Trump didn't like to wear them. The reality became glaringly apparent.

And it comes through loud and clear when you listen to talk radio. Fauci is blasted from noon to midnight as if he, rather than Donald Trump, were responsible for the American public's response to the epidemic. Just like Nikolai Yezhov and now Mitch McConnell, the rewriting of history goes on, day after day, on the American radio waves when it comes to Dr Fauci.