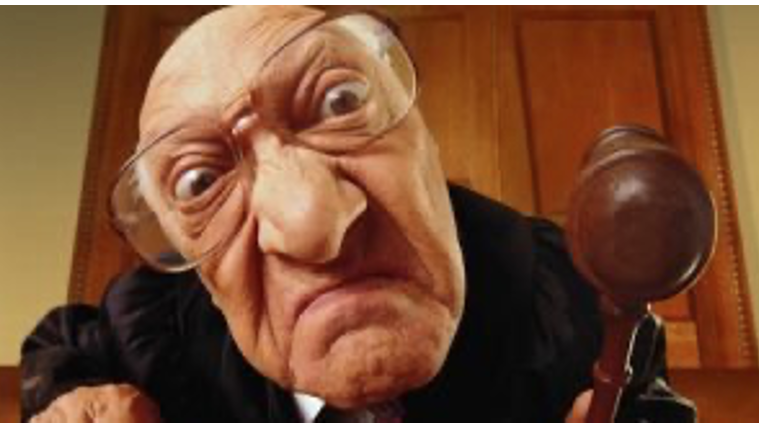 MY TURN--The inherent power in being a judge has always attracted sadistic predators and Los Angeles is no exception.

Genesis 18:1–22:24 includes the story of Sodom and Gomorrah and their corrupt judges whose perfidy caused the cities’ destruction. As Midrash Pirkei Eliezer relates, Lot’s daughter was sentenced to death for giving bread to a poor person. She called out to God, who dispatched his investigator angels to scope out the situation. As we know, she was not crying wolf. After God found out that the four evil judges had corrupted the entire city, He (or She) sent fire and brimstone (whatever that is).  Thus, perhaps our earliest political philosophy treatise addressed the destructive nature of a corrupt judiciary.

In 1776, the US Declaration based the revolution in part on King George’s imposition of corrupt judges on the colonies by making judges dependent on his will and not on the law.  The US Constitution grappled with problems of unchecked power. In balancing the power of the executive and the legislative branches, it gave great latitude to the judiciary.

Ironically, Justice Louise Brandeis wrote that daylight was the best disinfectant to combat corruption. “Publicity is justly commended as a remedy for social and industrial diseases. Sunlight is said to be the best of disinfectants; electric light the most efficient policeman.” Other People’s Money, 1914 The judiciary, however, is the most secretive branch of government. In Los Angeles, for example, it is unlawful to record a judicial proceedings without the judge’s express permission. (Public hearings are exempted from the Brown Act. Corruption thrives on secrecy.)

One can familiarize themselves with judicial corruption in Los Angeles and the rest of California by reading The Robing Room and Goggling judicial reform groups.  There are tens of thousands of pages of misconduct as LA’s real pandemic is bipartisan judicial thugery. See, for example, Judge Gregory Wilson Alarcon is one example, but a fish rots from the head down.

The heart of judicial corruption rests in California Constitution, Article VI, Section 10 which states: “The court may make any comment on the evidence and the testimony and credibility of any witness as in its opinion is necessary for the proper determination of the cause.”  This seemingly innocuous section has been falsely interpreted to mean that judges may do anything they wish, except displease a more powerful judge.  Of course, the Supreme Court’s interpretation is absurd, but thugs do not have to make sense when they have to power to throw innocent people into jail, e.g. Attorney Richard I Fine.

On August 12, 2015, the California Chief Justice Tani Gorre Cantil-Sakauye signed the en banc order affirming that Art VI Sec 10 gave judges the right to exclude Jewish attorneys and their clients from court and to ignore and/or alter evidence offered by Jews.  Lay persons are unaware that one way a corrupt Supreme Court makes law is to let stand a perverse lower court ruling.  That way the High Court’s role is obscured.  Judges within the system know what the Chief Justice wants and what perverse ruling will receive her stamp of approval.  This process was heavily criticized during the reign of Chief Justice Malcolm Lucas, but it is still employed.

Just as one robin Spring does not make, a single bigoted decision does not pollute the entire judiciary.  But, our story does not stop there.

The Jew attorney represented another client before Judge Torribio, Hollywoodians Encouraging Logical Planning (HELP). No one had raised any question about Attorney MacNaughton-Abrams representing HELP, but Judge Torribio on his own volition started excluding HELP from notices and hearings.  When HELP complained about being excluded because Judge Torribio disliked its Jewish Attorney, Judge Torribio never denied any of the facts but instead he asserted Cal. Const. Art VI sec 10 gave him the right to exclude whomever he wished and to ignore or alter evidence.  It was this interpretation of the Cal. Const. which California Supreme Court unanimously approved on August 12, 2015.

The evil here is not limited to anti-Semitism or to bigotry in general.  The interpretation, which the Supreme Court adopted, allows judges to do whatever they wish.  Few would be so reckless as to actually justify prejudice by mentioning on the Constitution.  Sometimes hubris and bigotry combine and allow the powerful to be careless.

While Art VI Sec 10 certainly was not written to condone judges’ being vicious predators, it has been perverted to that end.  The Probate-Conservatorship courts are foully corrupt, abusing and looting seniors’ estates. Lying jailhouse informants are so institutionalized that when Orange County Judge Goethals objected to their use, he had to be removed from the bench. Long story short, because Judge Goethals would not allow constitutional violations, all the prosecutors in the former District Attorney Tony Rackauckas’ Office objected to cases being heard by Judge Goethals.  The implication is that other judges would condone such practices.  Rackauckas has been replace by Todd Spitzer, and Black Lives Matter got Los Angeles County District Attorney Jackie Lacey booted from office.  The Supreme Court had done nothing to constrain the predatory behavior.

Outside the criminal justice system, judges hide behind Art VI Sec 10 to further developer corruption, intensify the homeless crisis and cause a pandemic of death among the homeless years before Covid-19's arrival.  In December 2016, Judge Richard Fruin ruled that the Los Angeles City Council could ignore California law (The Brown Act and Penal Code 86) and allow the city council to engage in criminal vote trading which was instrumental in every developer project being unanimously approved, thereby increasing LA’s Homeless Crisis by several thousand.  The current FBI case against Englander and Huizar looks like nothing but a cover-up by deceiving people into believing that something is being done.

Each time a new agency rates the quality of life of US cities, LA is at the bottom.  At every turn, one can find judicial thugs preying upon the people. Does the LA Times ever ask why judges need off shore bank accounts?  Of course not!