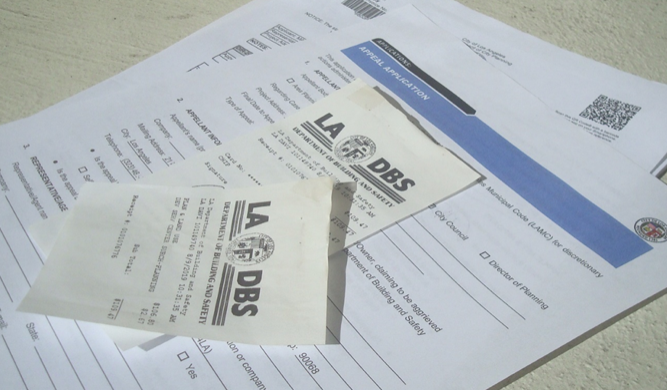 PENNY WATCH--It’s no secret that the City of LA is in a budget crisis. With the onset of the pandemic, revenues from hotel and sales taxes disappeared, and our elected officials are raiding the reserve fund to make ends meet.

The City is trying to scrape together every penny it can find, and so it’s not surprising that the Department of City Planning is proposing to raise fees for planning services.

Unfortunately, one of the things they want to do is increase the cost of filing an appeal. On Tuesday, February 16, the Planning & Land Use Management Committee will consider the new fee schedule.

City Planning is proposing that the $89 base fee be increased to $158, which may not sound like a big deal, but these numbers don’t really tell the whole story. In fact, when additional fees and taxes are added on, it now actually costs $109 to file an appeal, and if the proposed changes are adopted the cost will go up to almost $200.

There may be those who are inclined to sympathize with the City in light of the current budget crisis, but their sympathy would be misplaced. Remember, the City of LA was facing an annual budget shortfall between $200,000,000 and $400,000,000 BEFORE the pandemic hit. Prior to COVID-19, the City of LA was enjoying record revenues, and the folks at City Hall still couldn’t produce a balanced budget.

And how much additional revenue would the proposed increase actually generate? Not much. City Planning estimates that around 210 appeals are filed annually by persons other than project applicants.  Based on that estimate, the increase in appeal fees would probably generate about $14,000 per year. And there’s something else to consider. Since the new Zoning Code proposed by the City would allow the Director of Planning to approve many projects with no public hearing and no right of appeal, the number of appeals would almost certainly drop significantly. The City would have even less reason to say they can’t afford the cost.

Do you want to know how we could really save some money?

Let’s take a look at Mayor Garcetti’s salary. According to Transparent California, his total compensation, with benefits, comes to $375,438. City Councilmembers don’t do quite that well, with their total pay and benefits amounting to $285,673 annually. If they were all doing a great job, these sums would probably seem pretty fair. But let’s take a look at the job they’re actually doing.

According to the most recent homeless count, there are over 40,000 people living on the streets of the City of LA, in spite of repeated assurances from City Hall that homelessness is their highest priority and that they’re doing everything they can to address the problem.

The Mayor and the City Council have been telling us for years that high-priced new housing will somehow solve the housing crisis, while areas like Downtown, Koreatown, Hollywood and Venice are seeing rental vacancy rates between 10% and 30%. (“The Vacancy Report”, SAJE/ACCE/UCLA Law)  They’ve also been telling us that high-density projects will increase transit ridership and reduce traffic, even though transit ridership has been falling since 2014 and pre-pandemic congestion was worse than ever. And let’s not forget that they couldn’t even balance the budget before the pandemic when the City was enjoying record revenues.

So if we multiply the Councilmembers’ compensation packages, including salary and benefits, by the number of Councilmembers (15), we get $4,285,095. If we add in the Mayor’s total compensation, we end up with $4,660,533.  Since they’ve proven over and over again that they’re unable to address many of the most important issues facing LA, what if we cut their compensation in half? That would save us about $2,330,266 every year. This is way more than the lousy $14,000 that the City would get from raising the fees for appeals. It would also probably make many Angelenos feel a whole lot better, since we wouldn’t be throwing away so much taxpayer money on our elected officials, who promise so much and deliver so little.

The proposed new fee schedule for planning services is Item 4 on the agenda for the Tuesday, February 16 meeting of the Planning & Land Use Management Committee.

(Casey Maddren is President of United Neighborhoods for Los Angeles (UN4LA [www.un4la.com]), a community group focused on better planning and better governance, and a CityWatch contributor.) Prepped for CityWatch by Linda Abrams.