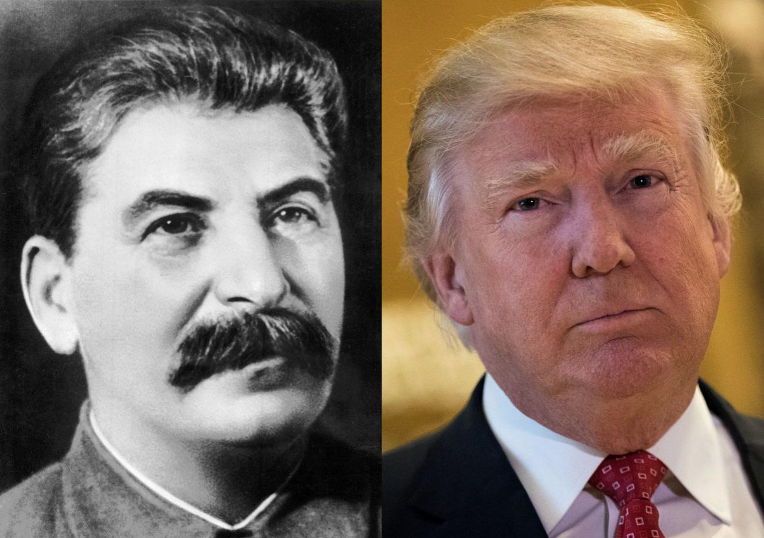 There will be lots of attempts to describe the morning after Trump's departure. The word hangover comes to mind, although it is a hangover born of stress rather than bourbon. Let's see if this time, the people who most wanted this happy result will stick with the project.

Another attempt at an opening paragraph:

Not so much elation -- just relief. Interestingly, it's the same word that other people have been using, most notably the Pod Save America authors and Steven Colbert.  I suppose the Trump era was sort of exciting for the previous president's supporters, but for the rest of us, it was a chronic ache interspersed with intermittent outrage. And the outrage was only intermittent because we got better at dulling our own thoughts.

One last attempt at an opening paragraph:

Joseph Stalin fancied himself to be a film critic. When Goskino brought the film Alexander Nevsky for Stalin to preview, one film reel was either out of order or missing. Accidents happen. Ignorant of the error, Stalin OK'd the film's release, and only then did the studio and director realize their mistake. But they didn't dare call the mistake to Stalin's attention. So this remarkable film went out to the public with that part of the film missing.

You can see where this is going.

We've just spent four years dealing with our own responses and mental defenses to this ersatz-Stalin figure who didn't like bad news. Of course the worst damage was done to the American people when, for his own opportunistic political reasons, he said that the coronavirus would go away. Later, in a similar faux-reality, he said that he would solve the problem, implying that this would come about through his own genius. When the virus didn't just go away, and the vaccine turned out to be nearly a year away, the president didn't level with us. And he didn't like to be contradicted or confronted by the press.

A side effect of the Trump behavior was the cult-like belief that face masks were unnecessary. His followers spouted this nonsense angrily and, in their failure to follow ordinary precautions, have undoubtedly added to the number of dead. Trump is no Stalin, but he has his own pile of corpses.

Trump didn't like the idea of climate change, he didn't like the effect of worker-protection rules on corporate profits, and most of all, he couldn't stand to be contradicted. Thus the crude, amateurish editing of a hurricane track done with a Sharpie and then shown to the press. Thus the incessant lying at press conferences and rallies and in the Tweets. And those lies had consequences because they represented policies that were executed by his toadies in the federal agencies. There were serious consequences regarding our national security, most notably a temporary (we hope) weakening of NATO.

For those of us who care about environmental protection, about racial justice, or about the ability to get health insurance if you've had any one of thousands of preexisting conditions, this has been a trying period. We've had to deal with official lies on nearly a daily basis. It starts to add up.

I noticed that it wasn't until maybe 8 or 12 hours after Joe Biden's swearing in that I started to relax. It's been a long era in which we would wonder, from day to day, "what's he done this time?" There even was an online site with a slightly profane name that was dedicated to answering this question.

tMostly it's been his appointments to department heads and the judiciary, but there have been a lot of executive orders (a term most of us hadn't even considered until recent years).

There are two essential lessons from the Trump experience. The first is that people have suffered through a lesson in cynicism that we shouldn't have had to endure. I will note that even Trump supporters in these pages concede that there was racism and bullying and bad policy, even if they call it "tone."

That experience is going to result in a political equivalent of ptsd. It's a long way from being shot at or watching your friends die, but it was a long time running, it was emotionally difficult, and it took a battle to get it out of our lives.

I suspect that the extreme right who now feel betrayed by Trump will be going through a similar withdrawal, at least those who 'fess up that reality is different from what they had believed. We are already seeing that effect in at least some of the Qanon followers through their online postings. Some of these people really believed that the inauguration would be interrupted by an armed assault in which the Democrats would be arrested and Trump would emerge triumphant. Some who were watching the inauguration commented in real time of their horror that this wasn't happening.

Traumatic stress is real, and as we've learned, it isn't just the battlefield that can get to people, if only at a lesser level.

The danger is that many who suffer this political version of traumatic stress will descend into fashionable cynicism, the kind that mouths the platitudes that both parties are equally corrupt, or that all politicians are crooks, or worst of all, that elections are useless. It's what the wealthy interests want you to believe, but you shouldn't fall for it.

There is an alternative.

It's an old cliché by now, but the price of liberty really is eternal vigilance. It's the real lesson of the past 4 years, and we better take it seriously. It is the price of defending ourselves against another Donald Trump.

The political center and moderate left did pretty well this time around, but it was due to the special circumstances of the Trump era. Between October and November of last year, 81 million people found it within themselves to cast a ballot in opposition to Trump's reelection, but let's be honest about it. That turnout was a gift from none other than Donald J. Trump.

The real question is this: Can the anti-right wing movement be sustained and thereby ensure future electoral wins?

To be even blunter --  we will be facing attempts to gerrymander congressional districts all over the country, and these will, if successful, have an effect on the 2022 midterm elections. Can the Democrats and independent voters (meaning all of them, all over the country) exert enough pressure on the Senate to get anti-gerrymandering legislation passed and, along with that, a strong voting rights act to protect people from voter suppression?

That's what the phrase eternal vigilance means -- we have to be vigilant now, even as we celebrate the tri-fold wins in the Senate, the House, and the presidency. And we have to make that vigilance meaningful by educating people that they have to vote not just in the occasional presidential election, but in every single election, starting with the City Council and the school board, but absolutely including the midterm congressional elections. That is where democracy will flourish or fail in 2022.