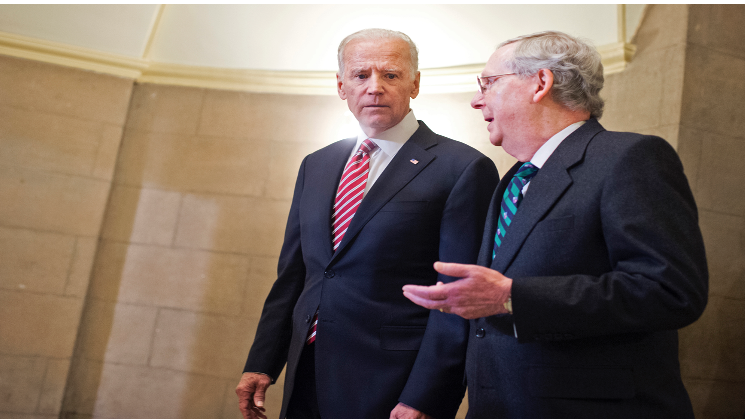 PERSPECTIVE--Maybe I hit my head on the tree limb harder than I thought, or did I get a glimpse of the Biden-McConnell Co-Presidency?

By Co-Presidency I mean, Biden and McConnell jointly set the national agenda.

A day after the insurrection, Senate Majority leader Mitch McConnell (R-Ky), muttered some words equivocating on the divinity of Donald Trump by admitting that the insurgents attacked democracy. Today (Tuesday, January 19, 2021), McConnell said that Trump was a false prophet, who fed the mob lies.  Speaking on the Senate floor so that there would not no doubt of his intention, McConnell said, "They (insurrectionists) were provoked by the president and other powerful people, and they tried to use fear and violence to stop a specific proceeding of the first branch of the federal government, which they did not like."  Translation from Congress-speak: “Trump is a traitor.”

McConnell is telling GOP Senators that their vote on impeachment is a “matter of conscience.”  Translation: “Convict Trump.”  McConnell is making it clear that any GOP who fails to vote to convict will be persona non grata in McConnell’s Senate.  McConnell is all about power – his power – and he is not one to let Senators do what they want.  How many Senators will support the man who called upon the barbarians to hunt down and lynch the Vice President?  By saying it is a “matter of conscience,” McConnell can hold each Senator responsible for his own vote.

After Trump is convicted and barred from running again in 2024, he becomes less relevant than a lame duck. Trump won’t even be allowed in the duck pond.  What are the Proud Boys, the KKK and the Nazis going to do? Storm other state Capitols and get thrown in prison? I think not.

McConnell is reframing the impeachment issue. A vote to acquit Trump becomes a vote for Nazis!  A vote to convict Trump is a vote for “your family,” to use Biden’s words from the last debate.

Life, Liberty and the Pursuit of Happiness.

As we gander ahead, what does McConnell gain by engineering Trump’s conviction?  Answer: A co-presidency!  Biden needs reliable votes from the center, which is comprised of the Left of center and the Right of center but excludes the Left and Right extremes.

The Threat to Biden’s Agenda Comes from the Far Left

Biden cannot govern while captive of the Left Wing since it alienates the Center Dems and everyone else.  Governing from the extreme is how Trump lost – plus being mentally ill and killing hundreds of thousands of Americans.  McConnell can deliver all the votes that Biden needs to pass centrist legislation.  When McConnell cancels Trump and relegates the Alt Right’s antics to the realm of criminal matters, McConnell’s power will come from an alliance with Biden on centrist public power. A Biden alliance with McConnell, the centrist GOP, and the centrist Dems means Biden won’t be captive of the Left.  If we continue the present Left - Right division, we will suffer a more violent, urban style civil war.  It is imperative that Biden and McConnell shut out their own extremists and allow cooperative, centrist policies prevail.

Centrist Governance Is Not a Compromise of the Two Extremes

Some think that a centrist government splits the difference between the two extremes, but that is a misconception.  Rather, a centrist proposes beneficial policies without kowtowing to the threats of extremes.  During Trump mania, the GOP let the Alt Right run roughshod over them, and as is generally the case when one extreme gets to call the shots, the result was disaster.  Trumps’s fall was remarkably fast.   Of course, his mental illness accelerated his decline.  While the Dem Left is mild compared to the viciousness of the Alt Right, forcing their ersatz-socialism and group rights agenda upon America will doom Biden’s Presidency. Thus, Biden needs McConnell to have enough votes not to be owned by the Left.

Does McConnell know how to be a decent human being rather than some evil power monger?  If we go back to the Founding Fathers, who had little faith in men and instead placed their hope in the balancing of power against power, the unknown aspect of McConnell is whether he can recognize sound public policy.  When McConnell is freed from the nazified right wing of the GOP, it is possible he will understand that his personal power and his legacy depend on Joe Biden’s having a successful centrist government.

The next four years is the time for McConnell to cease shilling for the 1% as the 1% is the Ultimus Extremus.  The 1%’s greed is the engine which drives the Whites into poverty giving rise to the Alt Right and the 1% is architect of the predatory judicial system to subjugate the Blacks and other minorities.

Each individual’s inalienable right to pursue happiness requires that we move away from the present predatory economic and judicial system.  We also need the wisdom not to lurch far Left into a Brave New World of ersatz-socialism.

McConnell has the chance to help America advance on the road to prosperity and justice by making certain the Senate impeachment vote is a rejection of Trump’s extremism and of his White Supremacist, KKK, and Nazi followers.