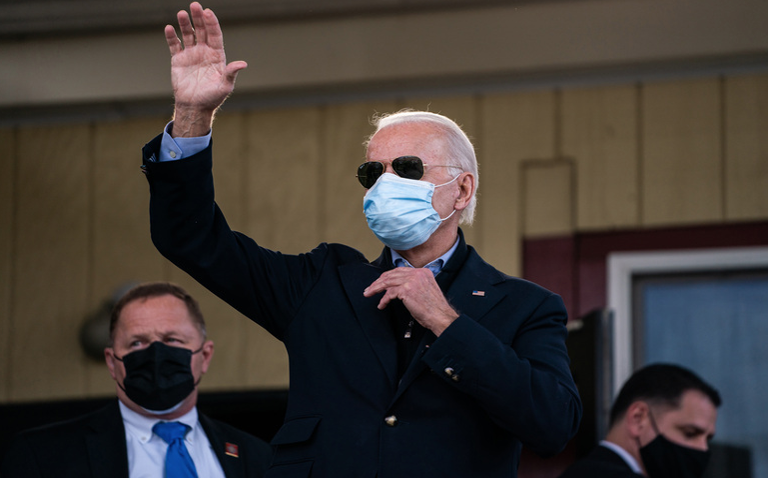 @THE GUSS REPORT-Welcome to the Presidency of the United States, Joe Biden! This mess is now your mess. Like each of your predecessors, you must play the hand you are dealt.

Just 234 days into his presidency, George W. Bush got the unimaginable tragedy of 9/11, the defining moment of his presidency. He had to calm the nation and world, oversee our recovery, and hold accountable its perpetrators while coping with detractors who felt that their candidate, former Vice President Al Gore, won after weeks of contentious Bush v. Gore litigation.

We hope you are well-rested because you face an immediate confluence of severe challenges, including more than 74 million Trump resisters and a stunningly divided House and Senate.

There's the big kahuna of COVID-19 on the rise in places like California and Los Angeles, where Governor Goober and Mayor Raisinette are unable to get vaccines into first responder arms.

Upwards of 40% of the Los Angeles Fire Department were no shows for their first vaccine shot, leaving the agency to ponder raffles to get its people to roll up their sleeves. Other vaccine distrusters worldwide see those stories on their iPhones, making the recovery even more onerous.

Meanwhile, places like West Virginia are doing infinitely better getting people inoculated, perhaps because they don’t have Gavin Newsom and Eric Garcetti, Messrs Goober and Raisinette, respectively, calling the shots.

During your campaign, you repeatedly promised a pathway to citizenship for tens of millions of undocumented immigrants. While you probably meant those who are already in the U.S., the rest of the world assumed you meant those who aren't here yet, too.

You also promised to stop deportations, discontinue building the border wall, and raised your hand in a June 2019 Democrat primary debate promising healthcare to undocumented immigrants while we still struggle to provide it to legal citizens.

Of that promise, The Hill wrote, "All 10 Democratic presidential candidates on the debate stage raised their hands when asked whether their health plans will provide coverage for undocumented immigrants, a controversial idea that could dramatically expand the pool of people needing government subsidies."

It continues, "Biden also argued that bringing illegal residents into a national health care program, they could help defray costs by adding wage earners to the pool of covered people."

Your message was heard loudly and clearly by many, including the massive, unmasked caravans headed here at this very minute from Honduras and elsewhere.

But where are those wages going to come from when the nation is still in a shutdown that failed miserably to contain the pandemic and will struggle to re-open with a new national $15 per hour federal minimum wage that'll force small businesses to close or hire fewer people? The poorest Americans who presidents always promise to give a hand-up to will be hit the hardest, which always means disproportionate suffering by Black Americans, who, thanks to South Carolina and Congressman James Clyburn, single-handedly clinched the Democratic nomination for you.

While the Chuck Schumer-led Senate is split 50-50 between Democrats and Republicans and Vice President Kamala Harris breaking ties, most Senate matters are decided by a two-thirds vote rather than a simple majority. In the Nancy Pelosi-led House of Representatives, the Dem majority of 221 to 211, with three vacancies, is thinner than it has been in decades, thanks to Cedric Richmond's resignation last week to join your administration as Director of the White House Office of Public Engagement.

You made some wonderful promises of what you will accomplish in your first 100 days in office, but if the Senate holds a Trump impeachment trial, all other work there comes to a screeching halt until it is resolved. If Schumer chooses not to have a trial, much of the country may ask, what was it all about, Alfie?

The road ahead only gets more challenging, given that the mid-terms are 659 days away, and redistricting indicates that the House and/or Senate may flip back to Red. The consequences of your choices in these early days will be locked-in and sealed sooner than many realize.

We trust that you have a plan for all of this and the worst federal debt load in history, after trillions of dollars in more COVID-19 spending. But as I wrote at the outset, Presidents play the hand they are dealt.

Wishing you much wisdom, great timing, and the luck to draw a royal flush.

(Daniel Guss, MBA, was runner-up for the 2020 Los Angeles Press Club journalism award for Best Political Commentary and has contributed to CityWatch, KFI AM-640, iHeartMedia, 790-KABC, Cumulus Media, Huffington Post, Los Angeles Daily News, Los Angeles Magazine, Movieline Magazine, Emmy Magazine, Los Angeles Business Journal, Pasadena Star News, Los Angeles Downtown News, and the Los Angeles Times in its Sports, Opinion and Entertainment sections and Sunday Magazine, among other publishers. Follow him on Twitter @TheGussReport. His opinions are his own and do not necessarily reflect the views of CityWatch.) Prepped for CityWatch by Linda Abrams.