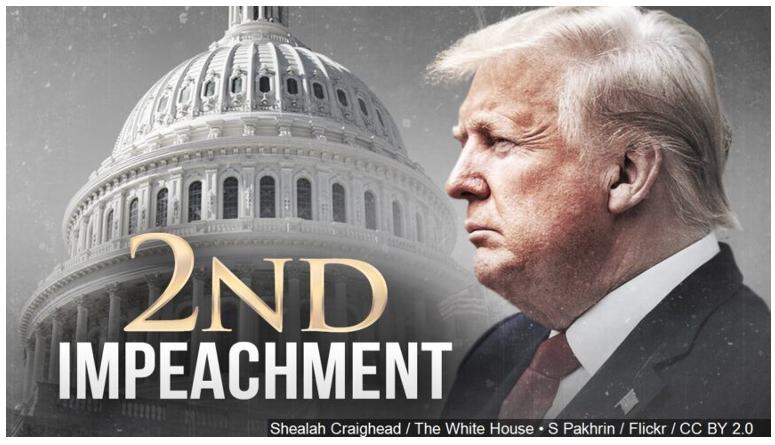 GELFAND’S WORLD--Half of all the presidential impeachments in the history of the United States are owned by Donald J. Trump.

This fact, new to American history, was pointed out by a Republican congressman Wednesday morning in opposition to that statement becoming fact. Any other sane person would have giggled uncontrollably.

As of early afternoon on Wednesday, January 13, 2021, the story is now historic fact. Of the four presidential impeachments, two are of Trump. More to the point, they are the two impeachments that are most justified because they involve selling out our country for personal gain.

The two sides were split in the way they chose to argue their cases. The Democratic side was simple and can be summarized in one sentence: The president incited the attempt to change the legal result of the presidential election through intimidation of the U.S. congress.

Admittedly there is a little more to the argument, as it involves a two month process of pushing The Big Lie (that the election was stolen by largely African American cities through tampering with the vote counts) followed by an attempt to extort a changed result from the Georgia Secretary of State, followed by calling supporters to D.C. to engage in protest the day of the Electoral College vote count, followed by the incendiary speech that provoked the violent attack on the capitol.

Aside: It is hardly noticed by the public or remarked upon by our otherwise diligent television commenters, but the original Constitution did not foresee that a presidential impeachment would involve a government split between two political parties -- at least to this extent -- and so the fact that I type "the Democratic Party side," is an unfortunate fact. The impeachment of Donald J Trump should have been led and voted by well-meaning leaders without regard to political party. Readers of a certain age will remember that it was Republicans who convinced Richard Nixon to resign the presidency. And let's remember that the Watergate scandal, as bad as it came across at the time, was a much less serious infraction than several carried out by Trump.

Now to the Republican defense. Well, there really wasn't anything that could be described in that way. There were one or two speeches during the debate that came close, but they largely consisted of bragging about the wonderful things Trump has done for the economy, for Israel, and something something blah blah blah.

The rest of the anti-impeachment argument went like this:

And there you have it. There was a little more, split into two streams. One was the occasional vitriolic spewing by a few congress people that tried to implicate Democrats in all things vile. It was basically the arguments you hear on right wing talk radio, in which Democrats are portrayed as somewhere between Stalin and Mao, but less charming. This stream of thought argues that Democrats are trying to censor all of us in their lust for power (one speaker, apparently the congresswoman from Qanon, had the word "censor" on her mask).

And then there were, for lack of a better description, some elder statesman sorts, who claimed to be speaking sorrowfully about the events of last week, the deaths of policemen, the desecration of the capitol, and the assault on democracy. In brief, they  threw the Trump protestors under the bus. We might note that since the evening of the capitol incursion, Trump himself has thrown the protestors under that same bus when it was politically advantageous.

We might repeat this point as it's going to be central to a lot of what happens on the national stage in the coming weeks: The Republican hierarchy is disavowing everyone who participated in the capitol riot and, by obvious linkage, the people who speak and act and look like those rioters.

The major story of the day was that 10 Republican members of congress joined with the unanimous Democrats in voting for impeachment. That's new. Democratic majority leader Steny Hoyer summarized the case for the prosecution by quoting (repeatedly) the words of Liz Cheney, the third ranking Republican in the House and the daughter of Vice President Dick Cheney:

The Democrats even suggested that there would have been more Republicans joining in the impeachment except that they fear either for their future political careers or for the safety of their families and themselves. The latter point is kind of a nasty implication, but is consistent with the prevalence of abuse and death threats that exist in online discussions.

A curiously low-key moment in spite of its historical significance

It all seemed a bit understated. The words were there, and even some emotion that rose to a significant level (credit Maxine Waters, for one), but the final summation by Steny Hoyer just droned. The point is not that the congress failed to win awards for acting and elocution, but that it started to feel a little stale.

There is a reason for this. Donald Trump has been so bad for so long, so entirely dishonest and so treacherous to the previously accepted norms of conduct, that this was just one more event in his life's history.

Equally to the point -- and it is a point that was made by one of the most right-wing of the Republican congressmen -- is that the remainder of Trump's term in office is measurable in hours. I think at the time the words were "167 hours."

Maxine Waters and others tried to argue that even now, Trump is a "clear and present danger," but I suspect that for the rest of us, he has been a clear and present danger all along, and we were in the process of counting down the days until noon, January 20, ever since the congress ratified the Electoral College votes the other night (you know, right after the riot).

I think there is a more important point to be made by this impeachment vote and the eventual trial in the U.S. Senate. If a president or any other high official makes war against the United States, something has to be said. The argument that the offense took place a mere 14 days prior to the end of the president's term -- and the impeachment vote a mere 7 days -- is a non sequitur. He did it and it cannot go unpunished, even if the punishment is just a public statement of his guilt.

There have been some very good commentaries on the House impeachment vote and a continuing stream of informative stories on the capitol riot and takeover.

Frida Ghitis, in CNN, writes on The GOP's carnival of hypocrisy where she dissects the arguments made by Trump's enablers in the House impeachment debate. She roasts Kevin McCarthy who now calls for unity after being part of Trump's efforts to overturn the national election results.

Impeachment would be divisive say the Republicans, and this after four years of dividing the country to the best of their ability.

Where was the Department of Homeland Security while the riot was being planned?

This is likely to become a big story. The overall question is why the government was not better prepared. The likely answer, already supplied by a New York Times story by Zolan Kanno-Youngs and Nicholas Fandos back on sept 9, 2020, points out that D.H.S. workers had to downplay risks from Russia and homegrown white supremacists.

As a follow-up by Josh Kovensky in Talking Points Memo argues, the D.H.S. was totally politicized and it was known to be career damaging to push arguments about domestic terrorists.

From a more speculative point of view, one Democratic congresswoman points out that on January 5, some of her Republican colleagues were providing tours of the capitol building, which, she implied, was to provide intelligence for the insurgents. Right now it is merely conjecture, but if any evidence to this effect comes out, it would rightfully be a scandal at the level of Trump's incitement.

Our law enforcement authorities are pointing out that right wing internet chatter threatens that there will be armed demonstrations in all of our nation's capitals. At one level it is just the same old bluster that we've witnessed in street demonstrations and which has been reported on by people who follow what flows through the internet. I suspect that the current process by which capitol rioters are being identified and then arrested will do much to inhibit such activities. At least it will be a message to those who might otherwise attempt a repeat of the capitol attacks. Our state governors have been warned, and I suspect that for many of them, the words of Ronald Reagan back in 1968 come to mind: "If there is to be a bloodbath, let it be now." The point back then, as it is now, is that there should be no such thing, but if the would-be rioters desire it, the authorities will be ready for them.