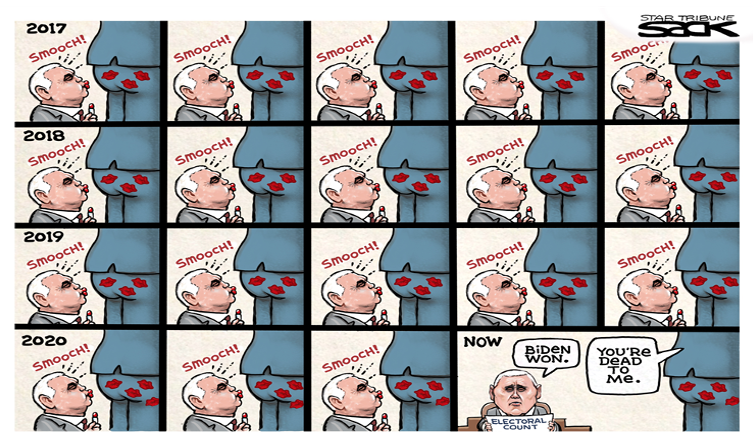 ONE MAN’S OPINION--As the House Dems and a few GOP move to impeach Donald Trump for his attempt to overthrow the US government,

including putting out a hit on Vice President Pence and dispatching his goons to hunt down and lynch the Vice-President, the majority of Republicans cry that holding the President responsible for his crimes will divide the nation.  Let’s be very clear that Trump violated 18 USC §§ 2394, 2395 – “Seditious Conspiracy and Advocating Overthrow of Government.”  When anyone is killed during the commission of a violent felony as happened to five people during the insurrection, all participants are liable for murder under the felony murder rule.

The entire world saw Trump, Donny Jr, and Rudy Giuliani urge the violent attack on Congress for the express purpose of stopping Joe Biden from being certified as the next US President and instead allow Donald Trump to remain in power.

Yet, the overwhelming majority of the GOP continue their betrayal by threatening nation-wide violence unless the country ignores Trump’s violent insurrection.

Mike Pence is a Craven Coward

Other than Trump himself, there is perhaps no more despicable actor in this on-going nightmare than Vice President Mike Pence.  After the President launched a search and destroy mission to hunt down and murder Mike Pence, Pence grovels at Trump’s feet.  The GOP could have redeemed itself, sort of, had it used the 25th Amendment to strip Trump of his powers.

We need to admit that House Speaker Nancy Pelosi made it harder for the GOP to invoke the 25th Amendment by her demanding that it be used.  Rumor has it that right after the insurrection, the President’s cabinet had begun discussions of using the 25th Amendment, but Pelosi is so detested by the vast majority of Republican voters, that her demands thwarted its use.  This ploy is in line with how Nancy Pelosi sabotaged the Nixonization of Trump in November - December 2019 despite the advice of the law professors not to stop the witnesses and the evidence gathering.

Pelosi’s behavior did not diminish the GOP leadership’s present duty to protect the Republic.  Pelosi’s gamesmanship with the national destiny did not remove the GOP duty to acknowledge Trump’s reprehensible behavior and to invoke the 25th Amendment. Yet, Pence is too cowardly to hold the President accountable for the attempt on the VP’s life and upon the Republic.

What does the 25th Amendment Accomplish?

When the Vice-President and a majority of the (shrinking) cabinet agree that the President poses an unacceptable risk to the nation due to his inability to carry out his duties, they send a letter which strips him of his powers. Trump, being mentally ill, thinks he has done nothing wrong so he will immediately send his return letter saying he is fine, adding “someone stole my strawberries.”  The VP and cabinet can then immediately respond, “Dear President Queeg, You’re nuts.” The second VP letter again removes Trump’s powers and Congress has 21 days to decide whether to restore the President’s power, but it will not.

The Additional Threat which Trump Poses to the Nation

As previously stated, Trump would try to stay in office by having his violent and mentally disturbed “militias” attack various state legislatures.  Trump’s advisors like Stephen Miller had to recognize that the US military was likely to ignore any order by Trump as Commander-in-Chief to take over the federal government, but if Trump’s private militias fomented violence, Trump could refuse to call out federal forces to stop his thugs.  From what we have learned since January 6th, that seems to have been exactly what Trump had set up – the federal law enforcement would not come to protect Congress. From the current reports, it took three hours to go three miles to save the Vice President’s and Speaker Pelosi’ lives. Re-enforcements, it seems, were sent only after the Trump toadies in federal law enforcement learned that Pence and Pelosi were still alive and coup had failed.

Now we learn that Trump’s insurrectionists intend to attack all state capitols and other government buildings.  The governors can call out their national guards, but there is a high risk that Trump will nationalize and seize control of the national guards.

The Defense Authorization Act [DAA] of 2007

Under section DAA’s § 1076, a state’s Governor was no longer the sole commander in chief of a state's National Guard during emergencies within the state. The President of the United States could then take total control of a state's National Guard units without the governor's consent. However, in 2008 DDA changed the law and required a Congressionally declared emergence and the national guard would be jointly under the state governor and the Department of Defense – not under the President.

There is a realistic threat that Trump will seize up the 2007 version of the Defense Authorization Act, while ignoring the 2008 limitation, to assert control over various national guards and the Trumpists within the Guard will follow Trump.  Such a division within the ranks of various National Guards can result in a wider civil war.

The civil war which Trump would gleefully bring down upon the nation will have no Mason-Dixon Line.  Instead, it will be urban guerrilla type violence turning American cities into their own Mogadishu’s.

They say that such a civil war cannot happen here, but two weeks ago few thought the President would launch a violent attack on Congress in order to stay in power.

Richard Lee Abrams is a Los Angeles attorney and a CityWatch contributor. He can be reached at: Rickleeabrams@Gmail.com. Abrams’ views are his own and do not necessarily reflect the views of CityWatch.)