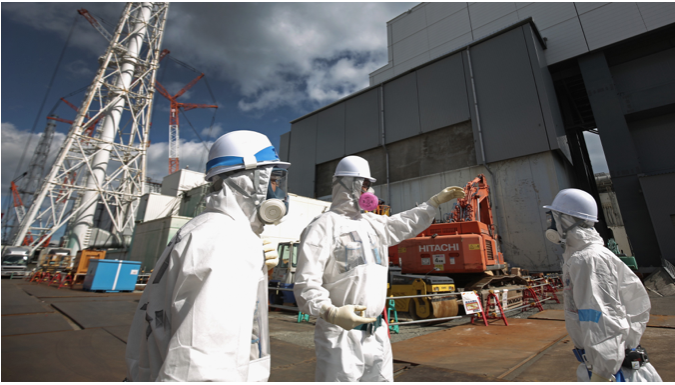 CLIMATE POLITICS--Tokyo Electric Power’s Fukushima Daiichi Nuclear Power Station, which experienced three massive meltdowns in 2011, is running out of room to store radioactive water. No surprise! But now, what to do about phosphorescent water?

Addressing the issue, Japan’s environmental minister Yoshiaki Harada held a news conference (September 2019). Unfortunately, he proffered the following advice: “The only option will be to drain it into the sea and dilute it.” (Source: Justin McCurry in Tokyo, Fukushima: Japan Will Have to Dump Radioactive Water Into Pacific, Minister Says, The Guardian, Sept. 10, 2019)

“The only option” … Really?

Over the past 8 years, Tokyo Electric Power (TEPCO) has scrambled like a Mad Hatter to construct emergency storage tanks (1,000) to contain upwards of one million tonnes of contaminated radioactive water, you know, the kind of stuff that, over time, destroys human cells, alters DNA, causes cancer, or produces something like the horrific disfigured creature in John Carpenter’s The Thing! That’s the upshot of a triple nuclear meltdown that necessitates constant flow of water to prevent further melting of reactor cores that have been decimated and transfigured into corium or melted blobs. It’s the closest to a full-blown “china syndrome” in all of human history. Whew! Although, the truth is it’ll be a dicey situation for decades to come.

Meantime, the Fukushima meltdown brings the world community face to face with TEPCO and the government of Japan in an unprecedented grand experiment that, so far, has failed miserably. Of course, dumping radiation into the Pacific is like dumping radiation into everybody’s back yard. But, for starters, isn’t that a non-starter?

Along the way, deceit breeds duplicity, as the aforementioned Guardian article says the Japanese government claims only one (1) death has been associated with the Fukushima meltdown but keep that number in mind. Reliable sources in Japan claim otherwise, as explained in previous articles on the subject, for example, “Fukushima Darkness, Part Two” d/d November 24, 2017, and as highlighted further on in this article.

When it comes to nuclear accidents, cover-ups reign supreme; you can count on it.

As such, it is believed the Japanese government is lying and should be held accountable for hoodwinking the world about the ravages of Fukushima, especially with the Olympics scheduled for next year.

For example, the following explains how death by radiation is shamefully hidden from the public via newspeak: Fukushima Daiichi Nuclear Power Station worker deaths “that expire at home” are not officially counted. Accordingly, how many workers on a deathbed with radiation sickness leave home to go to work (where deaths are counted) just before they die? Oh, please!

Meanwhile, the last thing the world community needs in the face of an uncontrollable nuclear meltdown, like Fukushima, is deceptiveness and irresponsibility by the host government. Too much is at stake for that kind of childish nonsense. And just to think, the 2020 Olympics are scheduled with events held in Fukushima. Scandalously, the International Olympic Committee (IOC) is A-Okay with that.

In contrast, a Greenpeace International March 8th 2019 article entitled: Japanese Government Misleading UN on Impact of Fukushima Fallout on Children, Decontamination Workers: “The Japanese government is deliberately misleading United Nations human rights bodies and experts over the ongoing nuclear crisis in areas of Fukushima… In areas where some of these decontamination workers are operating, the radiation levels would be considered an emergency if they were inside a nuclear facility.” Enough said!

“In its reporting to the United Nations, the Japanese government deliberately misrepresents the scale, complexity, and radiation risks in areas of Fukushima, the working practice and conditions for workers, and its disregard for children’s health and wellbeing. This reality should shame the government to radically change its failing policies,” said Kazue Suzuki, Energy Campaigner of Greenpeace Japan.

As such, either Greenpeace or the IOC is “dead wrong” about the conditions at Fukushima. Take your pick.

After all, the trend of misrepresentation of nuclear accidents has been established for decades. Not only Fukushima, Chernobyl (1986) is a nuclear disaster zone where the “official death count from radiation exposure” has been considerably discounted by various governmental agencies and NGOs. For inexplicable reasons (actually explicable but a long story), nuclear accidents are given Get Out Jail Free cards by the world’s press and associated governmental orgs and NGOs.

Yet, over time, the truth comes out, and when it does it’s dreadfully atrocious:

A BBC special report, The True Toll of the Chernobyl Disaster d/d July 26, 2019 says: “The official, internationally recognized death toll, just 31 people died as an immediate result of Chernobyl while the UN estimates that only 50 deaths can be directly attributed to the disaster.”

That’s the official tally. Ugh! It’s so far off the mark that, if it were a baseball pitch, it’d be in the dirt, and a prime example of the public not getting the truth about the ravages of nuclear power accidents.

Of course, it is important to take note of how “wordsmiths” describe the death numbers, i.e., “died as an immediate result of Chernobyl” can only include someone standing at the site when it happened, leaving out all cases of radiation exposure that kills and cripples over subsequent days, months, and years. Or, in the case of the UN statement, “only 50 deaths can be directly attributed.”  Only those standing there when it happened… ahem!

According to the BBC article, the Russian Academy of Sciences said as many as 112,000-125,000 died by 2005. That’s 2,500xs more deaths than the official reports, which also never increase in number over time as radiation takes its merry ole time blasting, destroying, and/or altering human cell structure. Ukrainian authorities claim death rates of Chernobyl cleanup workers rose from 3.5 to 17.5 deaths per 1,000 between 1988 and 2012 on a database of 651,453 cleanup workers, which equates to 11,392 deaths. Additionally, Belarus had 99,693 cleanup workers, equating to 1,732 deaths. Not only that, disability among workers shows that approximately 5% are still healthy in 2012 (only 5%, meaning 95% unhealthy) with commonality of cardiovascular and circulatory diseases and nervous system problems.

By 2008 in Belarus alone 40,049 liquidators or cleanup workers of Chernobyl were registered with cancer.

Viktor Sushko, deputy director general of the National Research Centre for Radiation Medicine (NRCRM) based in Kiev, Ukraine, describes the Chernobyl disaster as: “The largest anthropogenic disaster in the history of humankind,” Ibid.

Thus begging the most obvious of questions re Fukushima victims in the years ahead; how many cases of cancer, and how many will die? Unfortunately, radioactive isotopes don’t stop once they’re activated in a nuclear meltdown. They’re pernicious over time destroying and/or grotesquely altering human cell structure. For proof, visit second-generation Chernobyl children locked up in orphanages in Belarus.

According to a USA Today article – Chernobyl’s Legacy: Kids With Bodies Ravaged by Disaster, April 17, 2016: “There are 2,397,863 people registered with Ukraine’s health ministry to receive ongoing Chernobyl-related health care. Of these, 453,391 are children — none born at the time of the accident. Their parents were children in 1986. These children have a range of illnesses: respiratory, digestive, musculoskeletal, eye diseases, blood diseases, cancer, congenital malformations, genetic abnormalities, trauma.” Many of the children are hidden away deep in the forested countryside in orphanages in Belarus.

Back to Fukushima, there are numerous instances of governmental meddling to hide the truth, starting with passage of the 2013 government secrecy act, The State Secrecy Law, aka: Act on the Protection of Specially Designated Secrets (SDS), Act No. 108, which says that civil servants or others who “leak secrets” will face up to 10 years in prison, and those who “instigate leaks,” especially journalists, will be subject to a prison term of up to 5 years. Subsequently, Japan fell below Serbia and Botswana in the Reporters Without Borders 2014 World Press Freedom Index.

Horrifically, at the end of the day, when nuclear goes bad, it takes everyone along on a daunting trip for years and years and more years, outliving life spans but continuing generation after generation, like the 453,391 Chernobyl-radiated-influence children born after the nuclear blowout in 1986. Chernobyl altered their genes before they were born…. Imagine that!

Cliodhna Russell visited children’s orphanages in Belarus in 2014: “Children rocking back and forth for hours on end, hitting their heads against walls, grinding their teeth, scraping their faces and putting their hands down their throats.” (Source: How My Trip to a Children’s Mental Asylum in Belarus Made Me Proud to be Irish, the journal.ie, March 18, 2014.)

Postscript: “It’s a real shame that the authorities hide the truth from the whole world, from the UN. We need to admit that actually many people are dying. We are not allowed to say that, but TEPCO employees also are dying. But they keep mum about it,” Katsutaka Idogawa, former mayor of Futaba (Fukushima Prefecture) Fukushima Disaster: Tokyo Hides Truth as Children Die, Become Ill from Radiation – Ex-Mayor, RT News, April 21, 2014)

Post-Postscript: “The ashes of half a dozen unidentified laborers ended up at a Buddhist temple in a town just north of the crippled Fukushima nuclear plant. Some of the dead men had no papers; others left no emergency contacts. Their names could not be confirmed and no family members had been tracked down to claim their remains. They were simply labeled “decontamination troops” — unknown soldiers in Japan’s massive cleanup campaign to make Fukushima livable again five years after radiation poisoned the fertile countryside,” (Source: Mari Yamaguchi, Fukushima ‘Decontamination Troops’ Often Exploited, Shunned, AP & ABC News, Minamisona, Japan, March 10, 2016)

(Robert Hunziker lives in Los Angeles and is a CityWatch contributor. He can be reached at rlhunziker@gmail.com.)