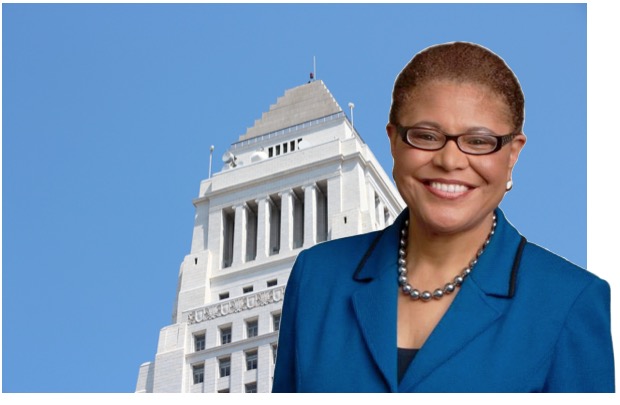 THE VIEW FROM HERE - There were ominous signs early during the campaign.  The city, however, was faced with only two options for mayor: (1) a GOP billionaire developer who complained about corruption while proud of his payoffs to Mayor Eric Garcetti’s “charity” fund to get his projects approved and (2) Grandmotherly Karen Bass with her impression of the smiling waiving Queen Elizabeth.  Those who saw some worrisome aspects of Karen Bass realized, “first things first.” Perhaps, after the election things will change. They have not; rather matters have taken a dark turn which even the Garcetti Administration did not have.

When Rick Caruso introduced his anti-Scientologist religious bigotry into the campaign, Karen Bass did not speak against such divisive prejudice, but rather her defense was to pile on about how bad Scientologists were and excuse herself for not recognizing the evil sooner.  Let’s put aside for the moment, that allegations were presented as criminal convictions, what portion of America blames an entire group for the (alleged) misdeeds of a few?  Suppose a candidate had lambasted all Roman Catholics for the decades of sexual abuse of children?  By 2018, the Church had paid out about $4 Billion to settle sex abuse claims.  Aug 25, 2018 TIME, the Catholic Church Has Paid Nearly $4 Billion over Sexual Abuse Claims, Group Says, By Emily Zogbi For many non-Scientologists, its mythology is not all that different Catholicism or Mormonism. In America, however, ginning up religious bigotry for political gain has been beyond the pale since  Father Charles Coughlin before WW II. Yet, Karen Bass accepted as true Rick Caruso’s defamation of Los Angeles’s Scientologists.  That was disturbing.

Then, Los Angeles was beset with the release of the illegal tape recording of three city councilmembers.  The scant background which is known is that the tape caused no concern while on Reddit. It became headline news after it had been weaponized into what appears to have been a Nixon style dirty trick in the mayoral campaign. The candidate to benefit from turning Mexicans against Blacks and hence against Karen Bass was Rick Caruso.  Conjectured motive is far from admissible evidence.  Yet, criminal investigations often begin with the question, “Who benefited from this release?” Then, there’s the maxim “Follow the money.”  More relevant is the question, “Who promoted the tape to the media?”   Oct 14, 2022, Los Angeles Mystery: Who Taped Meeting With Racist Rants? By Associated Press

How Did The Associated Press Get the Story Totally Backward?

The Associated Press falsely stated: “The discussion centered on protecting Latino political power during the redrawing of council district boundaries, known as redistricting.”  As shown in a prior CityWatch article, all three councilmembers supported the Black city councilmembers as well as Black Heather Hutt to replace Mark Ridley-Thomas in CD 10.  When it came to Blacks, they showed support for Black councilmembers without a suggestion to replace any Black with a Hispanic.  See section “They Are Anti-Black” Is the Biggest Lie in December 11, 2022, CityWatch, Lies Breed Violence

In a legitimate investigation, one asks: Who could coordinate all the media to simultaneously reach a false conclusion which the facts rebutted? The message was not subtle: Hispanics leaders think that there are too many Blacks in city government. Who was spending millions of dollars to court the Mexican community and still was far behind in the polls? Against whom would Hispanics vote if they believed LA had too many Blacks?

Everyone Jumps on the Liars’ Bandwagon

To her discredit, Karen Bass jumped on the bandwagon calling for resignations. She was not alone among Angelenos to blame the victims of character assassination. When she and Rick Caruso appeared at a forum sponsored by the American Jewish Committee AJC), the Anti-Defamation League (ADL), and the Jewish Federation Council (JFC), everyone bought into and promoted the big lie that the tape was racist. The AJC was somewhat compromised for its support of gentrification and destruction of minority neighborhoods. The ADL has recently turned Woker where virtually everything is seen as anti-Black. The JFC’s focus, however, is not politics.  Even our Woker President called for resignations!

Let’s Think about this Bizarre Haste to Condemn the Innocent

After Trump’s Big Lie that the Nov 2020 election had been stolen resulted in the January 6th insurrection and death at the US Capitol, even the President Biden called for the overturning of the election of three Los Angeles councilmembers based on Los Angeles’ own Big Lie #2 that they were anti-Black racists. (Big Lie #1 is that Los Angeles has a housing shortage.) Who has the cash and clout to orchestrate such unanimity up to the White House?

Fact: Blacks are about 8.5% of Los Angeles

As the world saw with Trump, lies breed violence. Thus, no one should have been surprised that on Friday December 9, 2022 at a Children’s Christmas party, councilmember de Leon was physically attacked by Black Lives Matter member Jason Reedy.  Although Reedy lied and said that de Leon had attacked him, the full videotape clearly showed that Reedy was the sole aggressor.  Only after Reedy had pursued de Leon, who tried to avoid the confrontation, and Reedy kneed and head butted de Leon, did the councilmember use moderate force to grab Reedy’s by the coat and place him on a table and then turn him over the shoe him towards the door. Then, Reedy renews his attack attempting to sock de Leon in the face, but misses.

A couple days after Reedy’s attack on de Leon, when Mayor Karen Bass was asked about the attack “an aide to Bass declined to comment.”   Dec 12, 2022 LA Times,  Mayor's new emergency order runs up against an unresolved problem: chaos at City Hall, by David Zahniser, Dakota Smith, Benjamin Oreskes, Julia Wick Here we are a month after the attack and Karen Bass remains silent.

During the city council’s winter break hiatus, one could hope that Karen Bass was busily working behind the scenes to shut down Big Lie #2.  According to Nury Martinez, Karen Bass was an eye witness on the Martin Luther Day float where Bonin’s child was being hyper-active. If Nury Martinez was fictionizing a narrative, then Karen Bass had a duty to set the record straight. If the child was unruly, Mayor Bass had a duty to confirm the facts. When one is an eyewitness, one a civic duty to speak up.

There is no excuse for Mayor Bass not to condemn political violence. Is that not the biggest no-brainer in politics?  As we saw at city council on Tuesday, January 10, 2023, the anti-de Leon forces are still disrupting the city council.

During city council public comment on Friday, January 10, 2023, Dr. Melania Abdullah stated that she and her supporters will continue to stalk Councilmember de Leon wherever he goes.    Video, 1-10-23 City Council @ 1:19:54 “We will follow you until you are gone, there will be no peace until you are gone, . . .  These 25 Black people will be yelling at you wherever you go Kevin, You know we do not give up, you know we do not give up.”  This is the same group which attacked city hall, closed down city council meetings and attacked Kevin de Leon in December.

California Penal Code § 646.9 defines Stalking as “willfully, maliciously, and repeatedly follows or harasses another and makes credible threat with intent to place another in reasonable fear for own safety or safety of his/her immediate family.”

There is a difference between protesting and stalking.  There is a difference between protesting and violence.  Kevin de Leon has already been physically attacked. Nonetheless, Dr. Melania Abdullah portends more violence.  In face of Abdullah’s threat to place Kevin in reasonable fear for own safety, Karen Bass reminds silent.  After lying that Kevin had attacked Jason Reedy, one caller on Wednesday, Jan 11th says, “I hope someone beats the crap out of you one day.”

Other callers during January 11th public comments, however, are questioning why Mayor Bass has condoned criminal behavior by her on-going silence. Had Karen Bass used the hiatus to rectify the lie and condemn violence, we would not be seeing such bold declarations of future political violence.

The other questions lurking over the city as it considers a new police chief are:

Why has Jason Reedy not been arrested?

Who is protecting Jason Reedy?

Who in city government has that power over Chief Moore?

Karen Bass has clearly flunked her first test as mayor.