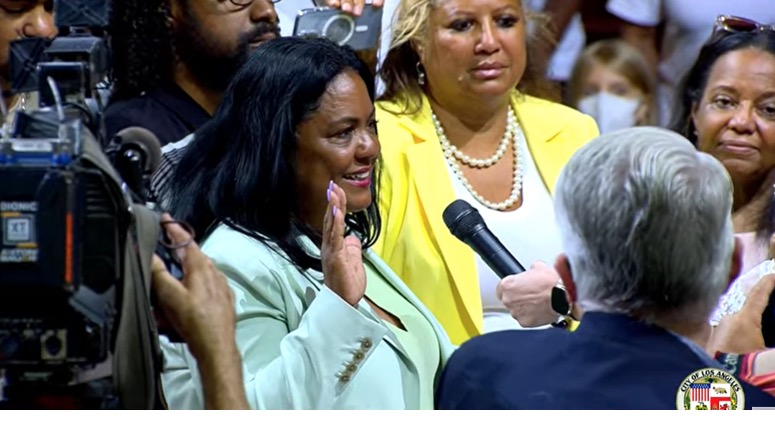 CD10 UPDATE - There is a power cabal at City Hall and they have selected and crowned the New CD10 representative Heather Hutt while ignoring complaints about process and refusing to consider any alternatives.

In our last election, there was a run off between Ridley-Thomas and Grace Yoo. The final count elected Ridley-Thomas but Grace Yoo received an impressive 36,485 votes.  Yet that clear support from the community was completely ignored by Council President Nury Martinez when considering assigning a placeholder for Ridley-Thomas who was sidelined until his trial for corruption.

Martinez saw a way to pay back Herb Wesson who had fought to get her to replace him as Council President when he bowed out to campaign for Supervisor (which he lost).  She unwisely put Wesson in as a placeholder (non voting member) pulling him out of his purgatory of working a regular job while Ridley-Thomas waited in his own purgatory for his trial to begin. This started a tumble of lawsuits and complaints that Wesson had been termed out of representing CD10.  While the courts were working it out he took over the helm and appointed Heather Hutt as his Chief of Staff.

Heather worked for Kamala Harris as her State Director where “in her capacity serving Senator Harris, was the principal representative among constituents and elected leaders throughout California.”

As the courts were getting closer to determining whether or not Wesson’s termed out status would allow him to stay on as a placeholder, Wesson probably saw the writing on the wall and bowed out.  Martinez acted at lightening speed to have Hutt anointed as an official voting representative. But to her shock and our awe, five city council representatives said “Not so fast”

“City Council President Nury Martinez was completely rocked by an unexpected turn of events when she was unable to garner 10 Los Angeles City Council members to agree to her proposal effort even to discuss having an official conversation about whether District 10’s temporary caretaker, Heather Hutt, would be named the temporary representative of District 10—giving her full voting power. Now, this wasn’t quite Mutiny on Spring Street, but having five Council members publicly refute their leader is certainly a political embarrassment.”

So Martinez pulled a political lever and the next day brought the matter to the Rules Committee, which she chairs. It cleared and the next day, Friday, Sept. 2 it was on the floor for a vote.

Hutt and her supporters were ready which speaks to the probability of the behind the scenes wheeling and dealing between Hutt, Martinez, Wesson and the organizations that support her.  With a day’s notice (?!), the council chamber was filled with Hutt supporters and a handful of people opposing the anointing.

The council members who opposed this could see the writing on the wall and complained about having to vote for someone who hadn’t been properly vetted and in a questionable process but only two had the courage to vote no. Mike Bonin and Monica Rodriguez.  So Heather Hutt was voted in as a CD 10’s official representative. Not by the community but by City Hall.

The black community hailed her win as historic. The first black woman to represent CD10!  But the black community only represents 28% of CD10.   Will she really represent ALL the constituents or just her favorites? There are already posts on Nextdoor that indicate requests for help with some neighborhood issues, were met by her deputies with advice for the constituent to take care of it themselves by calling the appropriate city agency. Time will tell if she and her representatives have the work ethic and integrity CD10 craves.

I have been glued to streaming shows that illustrate the corruption and power plays of local government representatives.  Los Angeles is constantly in the top 10 of the most corrupt cities in America.  Other council district constituents are sick of it and voting out the old guard, rejecting behind the scene power hand offs.  Will CD 10 voters start stepping up to the plate?  Time will tell.

(Dianne V. Lawrence is publisher and writer for The Neighborhood News Online, where this article was published.). http://www.theneighborhoodnews.net