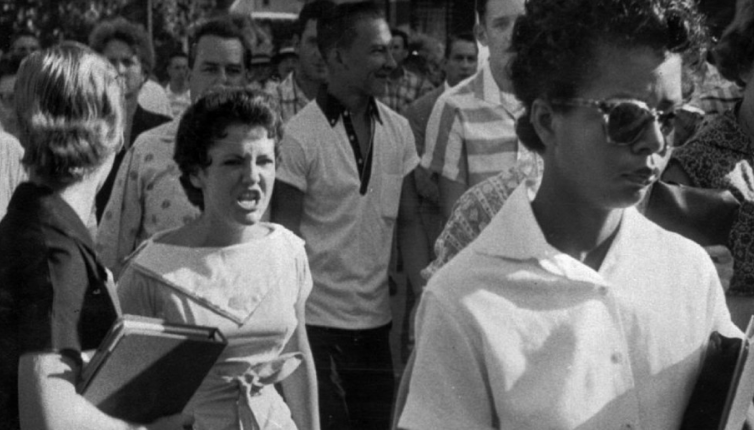 SAY WHAT? - The hateful crazy goes on apace. Of course it's everywhere: On Monday in New York City, which just mandated vaccines in schools, a marching mob of anti-vaxxers destroyed a mobile COVID test site as cops blithely waved them away but took no further action, which was def not because they were all white. Still, at this point Tennessee might take the lunatic cake. Last month, the state ranked first in the nation for both new COVID cases - up daily since August by nearly 90% to almost 12,000 new cases a day - and COVID-related school closures even as GOP Gov. Bill Lee has stubbornly resisted mask or vaccine mandates in favor of opt-out policies and wishing on a star.

"We're beginnng to see what we think and hope, cautiously optimistic, we're hopeful is a plateau," he said recently. "We do not know. Sometimes that happens. Sometimes it spikes back up" - especially in a state with a mere 38% vaccination rate. Meanwhile, over 400 schools have at least temporarily shuttered due to COVID infections, deaths of school employees arerising, ICUs are full of "vaccine refusal regret" and a record number of hospitalized children, the National Guard has sent 215 members to support 20 struggling hospitals, and after being fired this summer their top vaccination official charged officials have "jumped off a vaccination cliff" by halting all vaccination outreach for kids, even for measles, warning, "People will continue to become sick and die from this vaccine-preventable disease because they choose to listen to the nonsense spread by ignorant people."

Alas, there are a lot of those people in Tennessee, where over half the adults are white evangelical Protestants overwhelmingly opposed to the vaccine, conspiracy theories arebountiful, and many argue what's really needed to battle COVID is more screening for vitamin D defiiciency. Schools have long been a target of right-wing fury-and- fear-mongering by groups like Moms For Liberty - headed by someone with no kids in school - who not only oppose mask/vaccine mandates but books about MLK ("divisive"), Venus (naked), Native Americans ("paint white people in a negative light,” Johnny Appleseed ("sad and dark"), mating seahorses (eww) and Galileo, who was persecuted by the Catholic church for arguing the Earth revolves around the sun (“Where is the HERO of the church?”).

This summer the anti-anything frenzy prompted several Freedom Matters rallies - "If you're tired of the perpetual masking, medical privacy invasions, indoctrination in schools or election integrity being compromised, here is your opportunity - last week an audience of anti-mask parents with "Let Our Kids Smile" signs jeered as a pro-mask high-schooler spoke about his grandmother's death from COVID, and an earlier mob of unhinged parents attacked and threatened doctors leaving a school board meeting - "We know where you live" - an encounter that helped spark a request from the National School Board Association for the Biden administration to label these crackpots "domestic terrorists." That move further enraged all those reasonable people "who love their children and do not want them to be indoctrinated with a Marxist Critical Theory or suffocate during school hours while being forced to wear a mask" despite "mounting evidence" masks hurt their health and "are likely to dramatically facilitate COVID." Sigh.

For now most schools retain opt-out measures, though they face  multiple legal challenges. In Knox County, the lunacy reached fever pitch when a judge ruled schools must impose a mask mandate after parents of kids with disabilities successfully sued; the move sparked so many furious anti-masker threats the schools closed for a day to re-group. At a "Freedom Rally," speakers raved about "money-driven" mandates and sinister "biological compounds" in vaccines, calling resistance to mandates "a spiritual battle." A GOP gubernatorial challenger asked the audience for names of anyone "trapped in a hospital" so he could rescue them, challenged state COVID numbers - "Did anybody notice anybody laying in the street?" - and, covering all possible bases, urged, "Say no to the job. Say no to socialism. Say no to the new Jim Crow or segregation," throwing in "say no to voter fraud" for good crazed measure. Speakers at a park gathering weirdly echoed the same historically delusional claim they are today's "civil rights warriors": One guy yelled they must bring the schools "to a screeching halt" by blocking them with cars as "a moral obligation for our children's future" just like students used sit-ins to desegregate lunch counters because wearing a piece of cloth on your face to not  kill your friends and neighbors is just like being denied personhood in all areas of your life and co-opting that righteous struggle for equality in the name of "bodily autonomy" and oblivious white entitlement is all good and "we must unify and win this war," but wait say what?

So it was that kids in now-mandatory masks walking to Farragut's elementary, middle and high schools last week had to navigate a deranged gauntlet of livid so-called adults screeching "Sheep!" and "Freedom Over Fear!" in the name of defeating heathen tyrants. The ironies were many: The mob was made up not of “toothless uneducated rednecks” but rich, white, so-called Christians of Farragut who "only care about themselves"; it included multiple right-wing, unemployed crisis actors with profiles on IMDB; they were essentially terrorizing the general public for their own purposes and what's that called?; they represent a mere 1% of kids whose parents' refused to let them wear masks so the whole issue, noted one mom of 2 terrorized kids, "isn't a big deal, unless you're the kid who has to walk through that crowd"; and the protest, it turns out in a beyond-Orwellian twist, was organized by the commie-baiting, Joe-McCarthy-revering "men and women of good character, humane conscience, and religious ideals" of the John Birch Society, which yes, is still with us. Founded in Red-Scare-era 1958 with 11 members including the father of the Koch brothers by Robert Welch, a "bright but paranoid" candy manufacturer, the Birchers, 100,000 at their peak, exploited the era's racial and economic fears by feverishly hunting down "communist dupes" like Dwight Eisenhower and Justice Earl Warren while adeptly "flooding the zone with their own version of reality" wherein everything - water flouridation, civil rights, women's rights, gun control, abortion, the U.N., protests against police - was part of a vast communist conspiracy by shadowy "globalists" to usurp Americans' "freedom," which might sound bleakly familiar because here we are.

A number of cogent pieces have identified our current, manic,  "gothic form of conservatism" as a disquieting "apotheosis decades in the making," owed in part to "the truth-optional habits" of the Birchers. In ugly fact, many note, despite protestations by the respectable, rational, at-the-time moderate likes of William F. Buckley, the Birchers decades ago "established a secure beachhead" in the GOP; today, all but giving up, the GOP has "surrendered to extremism," with the Birchers' rag-tag, paranoid, racist zealotry still "in (their) DNA" and the "addled fringe" of QAnon, MTG and Proud Boy adherents to prove it. Thus did the pastor of Knoxville's "Patriot Church last week happily and unashamedly urge his congregation to "give Pastor (sic) John Shrock from the John Birch Society a big hand," praise the Lord. A Bircher organizer, Shrock easily launched into his demented rant:  Their maskless children are being segregated in the name of safety, put in segregation rooms (aka the gym) where they don't even have a flag for the Pledge of Allegiance, also they're "witholding sustenance from our children" who have to put on a mask to get a drink of water and it's only a matter of weeks before California's commie mask mandate washes up on Tennessee's holy shores so we have to stand up for our children now and come to school parking lots at 7:15 a.m. to walk them to school even if we're told we're insurrectionists but that's the price for standing up for our children and thank the Lord. In the latest news, children's COVID cases now exceed those of adults, Tennesee GOP lawmakers are again seeking a special session to get "relief from burdensome COVID-19 mandates being imposed on them," and can we get an Amen?