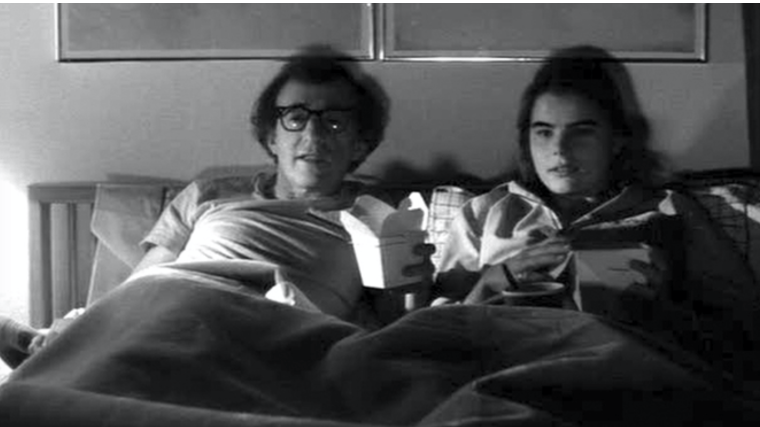 MEDIA WATCH-I missed the first round of talk about the New York Times’ publication of a moving and forthright letter by Woody Allen’s adopted daughter, Dylan, regarding his alleged sexual molestation of her over two decades ago.

Woody Allen is an American icon as well as a human being capable of all things human, perhaps including the capacity for exercising the inhumanity of humans.

I admire those on this website who have taken on the subject and expressed a philosophical and/or moral stance about Allen’s reported alleged behavior.

It is a troubling scenario with only speculation not evidentiary confirmation achievable from our distance as citizens and consumers.  His alleged crime is certainly inflammatory in nature and thus all the more fodder to be sensationally skewed by a mainstream corporate media so often less than reliable in framing scenarios within mature, moral, restrained and empathetic boundaries.

On the other hand there is a potential for skewing the story in a minimizing direction as well.  The “celebrity popularity” factor, and a consumer level of cronyism toward him or anti-cronyism regarding his former partner, Mia Farrow, and even a consumer level of cronyism with the crony celebrities of Allen’s which can induce a dismissive or minimizing take on the grave allegations.  (Diane Keaton being one of Allen’s long term supporters might impact a perspective to deny or minimize.  Just as Carly Simon’s loyalty to Mia Farrow and her daughter Dylan might impact one in a far more condemning direction.)

Our dialoguing is important and healthy in some respects — to explore and express where we stand in terms of a mutual collective sensibility and/or seriously diverging perspectives on the distasteful subject – existence and prevalence – of pedophilia influenced by our individual values, temperaments, social histories, ages, genders, – again – fan-cronyism, and/or psychological identifications and projections.

This national conversation is capable at times of reaching uncomfortable and contentious proportions, paralleling but not coming at all close to the anguish generated for those directly embroiled in the dramatic, ongoing controversy – the Farrow-Allen intimate family and social orbit, excepting those of us arm-chair speculators who have gotten emotionally triggered by similar trauma in our own respective histories.

It has been so many years now since the Woody Allen molestation scandal broke, along with the scandal surrounding Allen’s affair with and subsequent marriage to Mia Farrow’s teenage daughter, Soon-Yi, adopted by Farrow and Andre Previn.

I grew up with Woody Allen movies.  I loved the broad and often surreally satiric humor of the early ones, and the more sophisticated, New York City-hip and edgy later ones.

The movie “Annie Hall” certainly spoke to and for my generation.  Even my choice in fashion was impacted by that movie in its day.

Allen always presented a very sympathetic, vulnerable, self-deprecating and goofily relatable male anti-hero persona on the screen and stage.  This made him beloved by many, including me, on down through the decades.

Well, by me until the scandals hit.

I’ve got to say, however, that even before the scandals broke, Allen’s plotting of the difficulties of romantic relationships had often impressed me as a kind of male propaganda – a fantasy of ultimate serenity and comfort to be found by men with less contentious, necessarily younger and more naive women.  It made me squirm in my seat at times.

Allen’s depictions of such younger women have often been well drawn and well played by his chosen actresses, but again, that ongoing thematic direction has often grated on me.  Allen’s anti-heroes, often played by himself, were proverbial “baby chasers” and “-catchers” by the end of most of his movies.  The May/December relationship was portrayed as the most gratifying and ironically wholesome for his main characters.

Was this an indictment of mature women by Allen?  Maybe not an indictment, but surely something confessional about Allen himself, and relatable and/or appreciated by many of his fellow men, in particular.  We all know how tough maintaining sustained partnerships can be.  Sexual politics.  Impressionable and appreciative younger women can seem to be far easier on a male ego than a partner closer in age and proactive willfulness.

How many of us were not haunted by those depictions of Allen’s heroes with younger women when both scandals broke?  We, as a long-time audience, were ourselves seemingly cast by him as unwitting and cheerleading endorsers or at least condoning accepters of Allen’s apparent proclivity for much younger women.  And that beat seems to go on in his movies, even now.

There are two perhaps oblique additions I want to offer to the collective conversation at this stage of the Woody Allen scandals.

The first has to do with Mia Farrow.

A serious time ago, but soon after the scandals first broke, Farrow was interviewed on television about her tumultuous conflict with Allen over not only the ugly sexual allegations, but the consequential child custody issues.  Toward the end of the interview Farrow expressed disappointment and a genuine dismay – more like a remarkable simple-mindedness — that Woody Allen was not intending to star her in his next movie.

“Excuse me?” I addressed her through the TV screen.  “Did you seriously expect him to?

Did she not get the depth and scope of these allegations?  Would she expect to merrily continue on with their professional relationship?  The interviewer did not follow up on that amazing disclosure from Farrow.  Maybe she had been as dismayed as I had been hearing it.

My second anecdote is just as unsettling to me.

On rare occasions living in New York City one happens upon a celebrity on the street, in a restaurant, store, museum, even using mass transit.

Years ago, but, again, after the Woody Allen scandals had broken, I was strolling north on Park Avenue and came upon two men mid-sidewalk in animated conversation.

One was short, dressed in a khaki army jacket with matching khaki hat pulled down over wispy hair.  The man’s posture was a bit twisted, and I assumed the younger, taller man beside him had been going the opposite direction and had interrupted the khaki-clad man’s journey north.

I was startled to suddenly recognize the shorter man as Woody Allen.

Our eyes met for a second.  I was surprised at the degree of his apparent anger.

I was also startled how his many freckles gave his face an orange cast.

Now my personal code when my path on such rare occasions accidentally crosses with a celebrity’s is to respect his or her privacy and not engage — curious and titillated as I might be.  In fact, if I had had time I would have erased the surprise from my face and looked away from Allen.  But he had caught me in my surprise.

I continued on my way up the block.  Sometimes I opt to walk on Park Avenue since the sidewalks aren’t as crowded with pedestrians as Madison’s or Lexington’s, especially in the late afternoon.

There are mostly residences on Park, classy ones, with pretty entrances and lobbies.  Gracious and alert-looking doormen often are just outside, standing guard.  There are few commercial establishments.

It was far more natural for a Woody Allen to be strolling the sidewalks of Upper East Side Park Avenue than my non-moneyed self.

Suddenly, someone rushing by me whacked me across my upper right arm.  Hard enough to make me exclaim, “Hey!”

A man walking by must have been swinging his arms rather roughly and widely, and intercepted me with his left arm.  It had startled me.  Stung, in fact.

It seemed odd, since there was plenty of room on the sidewalk for both of us.

Annoyed, I looked over at him, moving on at a fast clip.

I saw the back of Allen in the khaki jacket and hat.

Was it accidental or on purpose?  It sure felt deliberate, but postured as not being on purpose.

I can’t confidently speculate on Allen’s motive for that whack, if there even was one.

However, whenever the subject turns to Woody Allen, as it has now, my memory of that curious, “New York minute” manages to surface.

(A version of this article was first posted 2-7-2014 on the Open Salon website.) Photo credit: Still from Manhattan. (United Artists).