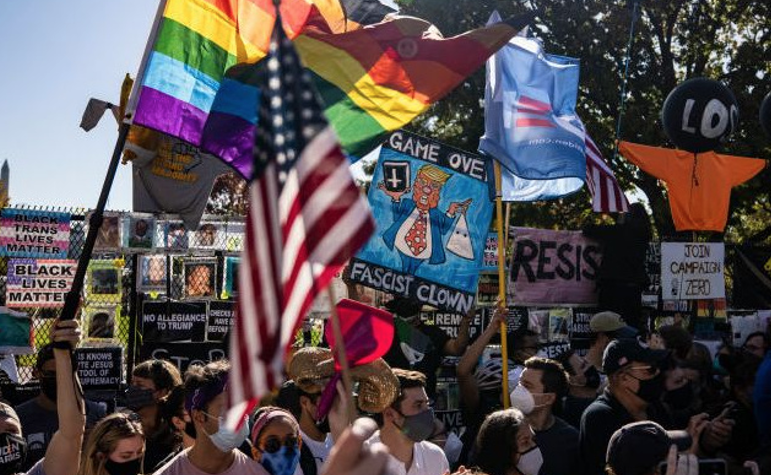 MEDIA WATCH--What a day. The triumphal streets filled with singular whooping, honking, dancing, weeping, hugging, pot-banging, flag-waving and soaring, curbside renditions of "America the Beautiful," which finally had something to celebrate.

In Philly, there were dancing mailboxes - or as one giddy enthusiast marveled, "dancing fucking mailboxes!" In Brooklyn, residents and passing USPS trucks exultantly cheered each other. In Atlanta, people paid poignant tribute to Martin Luther King and John Lewis, and assured powerhouse voting rights activist Stacey Abrams that she's earned the right to be "Secretary of Whateverdafukshewants."

On CNN, Van Jones tearfully praised an American moment that allowed him to tell his kids, "Character matters." And across the country, joyous crowds celebrated feeling "freed from the clutches of evil" with signs proclaiming, "Trump's Over," "The People Have Chosen Empathy," "You're Fired," "Science/Grammar/Morality Wins," "He's Gone," "This Is What Democracy Looks Like" and "Union Saved."

While most of the world concurred - Paris' bells rang out and Mayor Anne Hidalgo tweeted, "Welcome back, America!" -  there was radio silence from Bolsonaro, Netanyahu and Putin, the daddy of them all, who's maybe not as Ding-Dong-the-Witch-Is-Dead-happy as the rest of us deliriously, incredulously, thank almighty God and all things good rejoicing we're finally getting rid of him.

Justifiably, there was little sympathy for a fascist loser who "will never have another good day." 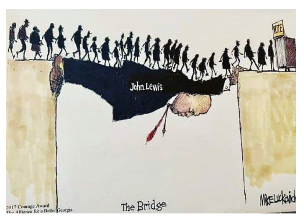 "I revel in his abject misery and humiliation," went one response; others toasted a grim future of investigations, bankruptcies, mental illness, a dark cloud of failure, and universal revulsion for choosing to leave "the way you have lived your entire life: disgracefully."

Some imagined the movie: "INTERIOR. NIGHT...A cell gate is slammed shut...A figure in an orange jumpsuit, huddled in the corner, long hair amiss on balding pate. For the very first time, he is afraid."

On the day of his defeat, he was golfing; he left behind at least five new COVID cases in the White House, including Mark Meadows, and a surreal SNL skit of "a big press conference" led by a rabid Rudy Giuliani at Philly's Four Seasons - alas, thanks to his moronic team's usual acumen, not the hotel but the landscaping company, between Fantasy Island Adult Books and a cremation center.

Yes. This - plus Miller,  DeVos, ad nauseum - is what's over. What's beginning: Vice President-elect Kamala Harris opened her victory speech by quoting John Lewis: “Democracy is not a state. It is an act.” “What he meant was that America’s democracy is not guaranteed," she went on. "It is only as strong as our willingness to fight for it.” And so we must, old and new.

Glad friends from Burundi - former asylum-seekers, now citizens - just voted in their first election. "I'm very happy today," the husband wrote us, "for I understand more the power of 'We The People.'"