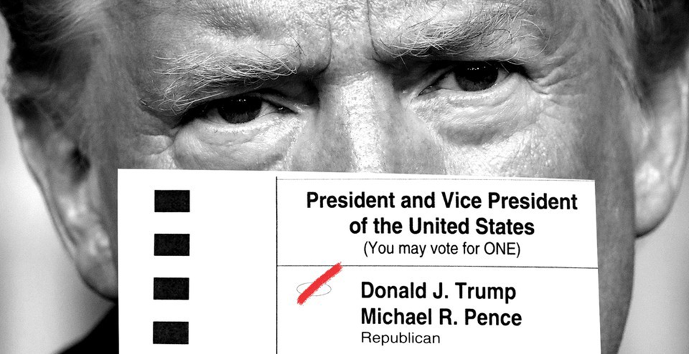 MEDIA WATCH--President Donald Trump is losing to former Vice President Joe Biden by more than 10 percentage points in both the Real Clear Politics and FiveThirtyEight national polling averages. This historically large margin suggests that something amazing has happened: Even in our hyperpolarized political environment, a meaningful number of voters have changed their minds about Trump.

Equally amazing: The majority of 2016 Trump voters — despite a mismanaged pandemic, widespread economic fallout, a racial crisis exacerbated by divisive rhetoric, and a debate meltdown — plan to back Trump a second time.

What makes one voter who supported Trump in 2016 decide to support Biden? And what makes another voter — even one who thinks things are going badly — stick around?

In the simplest, broadest terms, those who are abandoning Trump are doing so because they place most of the blame for the state of the country on the president. Those who are sticking with him, despite their expressions of discomfort with him personally, are driven by an even deeper scorn for the president’s detractors.

Since 2018, I’ve conducted roughly 50 focus groups with Trump voters who rate the president as doing a “very bad job” or a “somewhat bad job,” to understand the shifting dynamics within my own political party. (I’m a lifelong Republican.) In 2020, I narrowed my research primarily to white women in swing states who give him the lowest performance grade.

These women generally loathe Trump. When I ask why they rate him as doing a bad job, they rarely pull their punches. He’s a “narcissist,” “bully,” and “racist”; he’s “unprofessional” and “embarrassing” as well. They are dismayed by the chaos, the tweeting, his general nastiness and divisiveness. They thought that the bombastic showman they saw on the campaign trail in 2016 was an act and that Trump would rise to the dignity of the presidency. They agree — with a mixture of horror and bemusement — that such a transformation never took place.

Some of the women who are definitely voting for Biden had immediate buyer’s remorse after voting for Trump in 2016. One of them memorably told me that she “would vote for a dog over Donald Trump.” Many women who fall into this category say that if they had it to do over, knowing what they know now, they would have voted for Hillary Clinton.

But most of these women say their thinking evolved over time as they weighed the foibles of the president against sins of the elites, whom they viscerally distrust. For instance, during the focus groups I convened throughout Trump’s impeachment, few of the women had anything nice to say about Trump’s actions. But their real contempt was reserved for Democrats and “the media,” whom they viewed as unnecessarily adversarial to Trump. And the plain fact is that they were unwilling to give much weight to an argument about the rule of law and abuse of power, because it didn’t have a visible impact on their lives.

But the pandemic has. In fact, it has created a noticeable shift in support away from Trump and toward Biden.

Before the pandemic, when focus-group participants were asked how things were going in the country, they would always split their responses into two separate categories. They thought things were going well in terms of the economy — and thought Trump didn’t get enough credit for the relative peace and prosperity the country was experiencing. They also said that the mood of the country was dark and divided, and used terms like “powder keg” to describe their inchoate concerns about the future. They worried that the president’s rhetoric and recklessness would eventually have consequences.

In focus groups over the past six months, participants have felt no need to bifurcate their assessments. The most common response is — seriously — a variation on the term shit show. Personal pain often spills into these women’s answers. They note that they were furloughed or laid off, or that someone in their family was. Some have underlying medical conditions or are in remission from cancer and are frustrated with people who won’t wear masks. Others talk about struggling with loneliness or trying to raise young children without the help of day care or family. Some have lost parents or relatives and weren’t able to be with them when they died. Many refer to George Floyd’s death and the protests that gripped the country over the summer. Some are angry at what they call “looting and rioting.” Others say that they joined the protests in their town or city.

Occasionally, I invite participants to a second focus group, to see if their views have changed. In November 2019, a woman from Pennsylvania explained that she planned to vote for Trump again because it was better to go with “the poison you know than the poison you don’t know.” In August, she said she was leaning toward Biden, citing the president’s divisive rhetoric around the George Floyd killing. In April, a woman from Wisconsin said she couldn’t vote for Democrats, because the party didn’t reflect her values. In August, she said she couldn’t vote for another four years of Trump, for her young son’s sake.

Trump has done nothing to win these voters back. In the focus group I convened immediately after the presidential debate, not a single one of the nine swing-state women in the group was committed to voting for the president again in 2020. More than half said they were either definitely, or most likely, voting for Biden.

Trump’s alienation of the voters who took a chance on him in 2016 tells part of the story of Biden’s standing in the polls. And these defectors might be enough to put Biden over the top in November.

Nevertheless, the story isn’t a wholly good one for Democrats. Even in the past six months, some participants have continued to say they’ll back Trump. They don’t think Trump is doing great, but how could he? He’s constantly contending with obstructionist Democrats, a biased media, and a bunch of Never Trump Republicans in Name Only.

Some meaningful number of voters who are clear-eyed about Trump and his manifest failures — even those who think he is plainly doing a bad job — will stick with the president because they believe Democrats are worse and the media aren’t to be trusted. And these aren’t voters who are glued to Fox News and reading Breitbart News. Often they don’t think about politics at all — and they certainly don’t follow the daily machinations of Washington. They’re typically not on Twitter. Instead they swim in a cultural soup of Trumpism, surrounded by friends, family, and social-media acquaintances who do live more exclusively in a right-wing-media ecosystem.

Even if Biden pulls off a landslide victory, that ecosystem will remain. And so will the dislike of Democrats and distrust of the mainstream media. Getting rid of Trump won’t end the opposition’s problems.

(Sarah Longwell is the executive director of Republicans for the Rule of Law and publisher of The Bulwark. Originally published at www.theatlantic.com..