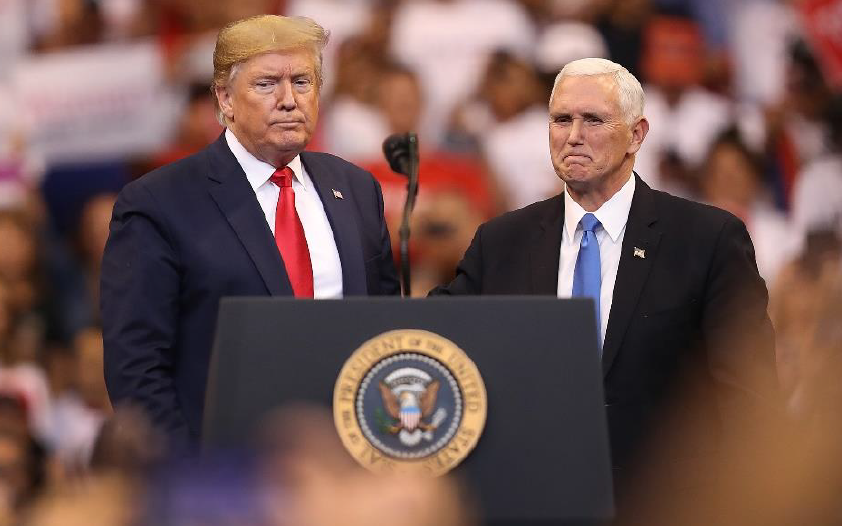 MEDIA WATCH-resident Donald Trump’s diagnosis with Covid-19 just a month before the presidential election has been the latest shock to the United States in what was already a year marked by uncertainty and instability.

Although modern presidents have had significant health challenges in the recent past — Dwight Eisenhower suffered a major heart attack in 1955, and Ronald Reagan survived an assassination attempt in 1981 — none has occurred so near an election.

While many people with the coronavirus don’t get seriously ill, Trump has a number of major risk factors as an overweight male septuagenarian. If his conditions worsen beyond the mild symptoms already reported, it creates the potential for legal and constitutional crises.

So what happens to the country if Trump gets really sick?

Under Section 3 of the 25th Amendment to the Constitution, the president can voluntarily turn over power to the vice president if he is unable to serve. The president simply sends a letter to the speaker of the house and the president pro tempore of the Senate stating his disability. Once he has recovered, he can send another letter and reclaim power. Per Brian Kalt, a professor at Michigan State School of Law, who has studied the 25th Amendment extensively, there’s no formal process for sending the letter, and it becomes operative once it is sent.

Is there any precedent for this?

Yes, it has been invoked three times since the 25th Amendment was ratified in 1967, once by Ronald Reagan and twice by George W. Bush. All three times took place when the incumbent was undergoing a colonoscopy.

So then Pence becomes president?

Yes. When the 25th Amendment is invoked, Pence has all the “powers and duties” of the office as acting president. However, as Kalt pointed out, it means he is not serving as vice president, and that office is functionally vacant. This means Pence cannot perform his only constitutionally mandated duty as president of the Senate. In tight Senate votes, such as those for a contested Supreme Court nominee, that means a tie would automatically lead to the vote failing without his ability to cast a tie-breaking vote.

And if Trump is unable to send that letter?

Then Section 4 of the 25th Amendment gets invoked. This may be familiar to readers of Resistance fan fiction as the process by which the vice president and the majority of the cabinet get together and remove Trump from office. The provision was drafted in the aftermath of the John F. Kennedy assassination to deal with a pressing concern — that if the president is in a coma or otherwise unable to serve. In particular, the drafters were worried about a situation like that under Woodrow Wilson, who suffered a massive disabling stroke but refused to share that information with the public. The result was that the country was left to be run by Wilson’s wife and aides while the vice president and Cabinet were left in the dark.

It is. Birch Bayh, the author of the 25th Amendment, explicitly said Section 4 was intended to address “a Woodrow Wilson situation.” However, when the concern is the president’s physical health, not his cognitive abilities, it’s less likely that Section 4 comes into play.

So what happens to the election?

Trump can’t be removed from the ballot if he gets seriously ill or dies. As of Friday at noon, 2.7 million Americans have already voted. In theory, the Republican National Committee has the ability to designate a replacement for him on the ballot, but it’s too late for this to happen. In some ways, this

situation would be analogous to when Republicans explored removing Trump from the ticket in 2016 after the Access Hollywood tapes.

As Rick Hasen, a law professor at the University of California, Irvine, told GEN in an interview, that then becomes an issue of individual state laws about electors and creates the possibility of scenarios where state legislatures could pick electors directly rather than the popular vote. “It does raise the risk that someone other than voters will ultimately be responsible for choosing the next president,” he said.

Although the Supreme Court recently held that a state can bind electors to support the winner of the state’s popular vote, it leaves open what happens if the winning candidate dies. In a footnote, Justice Elena Kagan wrote “nothing in this opinion should be taken to permit the States to bind electors to a deceased candidate.” (Read the rest.)