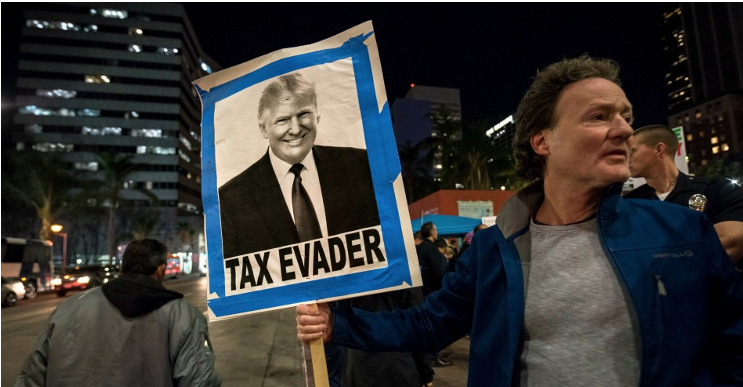 MEDIA WATCH--While President Donald Trump's long-running effort to game the U.S. tax code for his own financial benefit was the central focus of explosive new reporting on the billionaire's tax returns by the New York Times, progressive observers and lawmakers were quick to note that the behaviors revealed by the documents are commonplace among America's wealthy elite—a fact they said is cause for widespread outrage and a renewed push in Congress for transformational change to a system that is fundamentally rotten.

"Donald Trump is a liar, a cheater, and a crooked businessman, yes. But he's also taking advantage of a broken, corrupt, and unequal system that's built for people like him to do what he did."
—Sen. Elizabeth Warren

"Most of all," Pearl added, "the American people should be pissed off about the fact that instead of offering them healthcare, or affordable childcare, or financial support during a pandemic, their government instead prioritizes protecting the wealth of the rich, powerful, and selfish."

"If we are going to create an economy that works for all of us, not just those at the top," said Clemente, "we need to create a fair share tax system that closes loopholes, cracks down on tax cheats, and prevents any unscrupulous tycoon—sadly, including the president of the United States—from dodging their tax obligations for decades on end."

Based on more than two decades of tax records the president has long fought to conceal from the public and Congress, the Times report details how Trump has repeatedly exploited gaping loopholes and business-friendly provisions in the U.S. tax code to massively reduce his federal income tax bill. The result of Trump's maneuvering, according to the Times, was that the billionaire paid just $750 in federal income taxes in both 2016 and 2017 and not a dime in 10 of the 15 years before his White House victory.

"Trump's tax returns tell us that he's either a very bad businessman or a tax cheat—likely both," tweeted Sen. Bernie Sanders (I-Vt.), alluding to Trump's use of major business losses to dodge income taxes.

"But more importantly," Sanders added, "it shows how the wealthy, unlike most Americans, are able to avoid paying taxes. The top 1% is responsible for 70% of unpaid taxes. It's time to tax the rich."

Sen. Elizabeth Warren (D-Mass.) echoed Sanders, arguing that the revelations in the Times reporting are "about more than one man's personal tax scams."

"Donald Trump is a liar, a cheater, and a crooked businessman, yes," said Warren. "But he's also taking advantage of a broken, corrupt, and unequal system that's built for people like him to do what he did."

Since taking office in 2017, Trump has worked with his Republican allies in Congress to make the U.S. tax system even friendlier to the wealthy and large corporations while leaving working- and middle-class families in the dust.

Steve Wamhoff, federal policy director at the Institute on Taxation and Economic Policy, noted in a statement that the Times reporting does "not include Trump's tax returns for 2018 and 2019, the first two years after the 2017 Tax Cuts and Jobs Act went into effect. The law opened new tax avoidance opportunities for wealthy business owners."

"There are two tax systems: one that most of us follow and another far more generous one for the very rich. While it is common for the wealthy to use the tax code this way, Trump is in a league of his own."
—Steve Wamhoff, Institute on Taxation and Economic Policy

"There are two tax systems: one that most of us follow and another far more generous one for the very rich," said Wamhoff. "While it is common for the wealthy to use the tax code this way, Trump is in a league of his own. His losses seem to be, in many cases, more than just paper losses. Anything he is personally involved in tends to lose money. And it is possible that his various maneuvers do, in fact, exceed what is allowed by the law."

In addition to hiking income taxes on the rich and imposing a wealth tax, analysts said in response to the Times reporting that congressional Democrats must also prioritize enforcement of the nation's tax laws by adequately funding the IRS, which has been crippled in recent years by Republican budget cuts.

"Right now the IRS is fighting with paper swords," tweeted Binyamin Appelbaum, economics writer for the Times Editorial Board. "Making rich people follow the law is a matter of justice and oh, by the way, it would also be hugely profitable for the government. Every time a billionaire cheats on their taxes, that's less money for roads, schools, etc."

Pearl of the Patriotic Millionaires said that "it seems obvious that Trump has committed some amount of criminal tax evasion, but that's not the biggest issue here."

"The real problem is a system that provides such absurd loopholes to the ultra-wealthy in the first place, and a deliberately underfunded IRS that lacks the capacity to properly prosecute rich people's criminal tax evasion," said Pearl. "Trump's case may be particularly egregious, but he's far from unique."

In July, as Common Dreams reported, the Congressional Budget Office estimated that the amount of unpaid taxes between 2011 to 2013 averaged just over $380 billion per year—a figure Sanders decried at the time as "an absolute outrage."

"Congress is leaving hundreds of billions of dollars in taxes uncollected from the wealthy," Sanders added. "Make no mistake: the primary beneficiaries of IRS funding cuts are wealthy tax cheats and large corporations. Do not think for one second that the wealthiest country on Earth is unable to make critical investments to meet people's basic needs in terms of healthcare, food security, education, and unemployment."

Writing for the Discourse Blog on Monday, journalist Paul Blest argued that the U.S. tax system in its present form "invites manipulation by anyone rich enough to do it." But, Blest added, the tax code's current construction is the result of deliberate policy decisions and thus—with adequate political will—reversable.

"It really doesn't have to be like this; the government can act to heavily tax the rich and powerful and use the money to fund public services and has in the past," wrote Blest. "And if people want to reduce the power, influence, and mythos surrounding obscenely wealthy people like Donald Trump, there are far worse places they could start than the U.S. tax code."

(Jake Johnson writes for CommonDreams.org … where this perspective was first posted.)