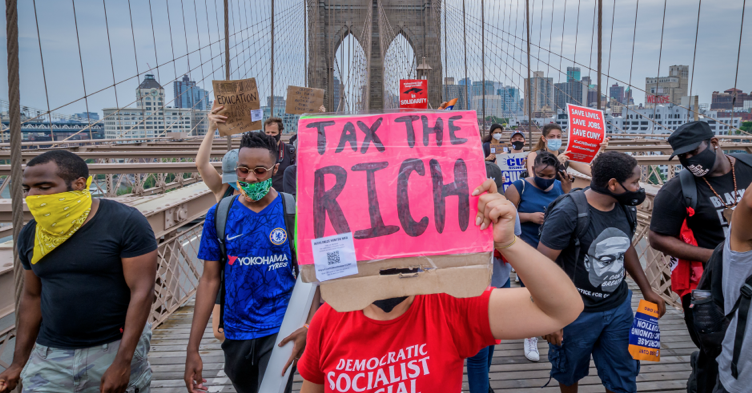 Big drug company CEOs and their major investors are doing nicely, too.  Since the start of the pandemic, Big Pharma has raised prices on over 250 prescription drugs, 61 of which are being used to treat Covid-19.

Apologists say this is the “free market” responding to supply and demand – the barons of Big Tech, online retailing, and Big Pharma merely providing what consumers desperately need during the pandemic.

But the market also operates under laws that ban profiteering, price gouging, and monopolizing, and that tax excess profits in wartime. Where did they go?

The Trump administration hasn’t enforced them.

Trump is also ignoring laws that ban trades on insider information. The White House is distributing billions in subsidies and loans to select corporations – enabling CEOs and boards to load up on stocks and stock options just before deals are announced, then rake in fat profits after stock prices surge.

Insiders from at least 11 companies have sold shares worth over $1 billion after such announcements, according to an analysis by the New York Times.

In late June, a San Francisco company called Vaxart announced that the Trump administration had selected it to develop a coronavirus vaccine. Presto. The value of stock options distributed to company insiders just weeks before increased six-fold. Stock options held by Vaxart’s CEO went from $4.3 million to more than $28 million.

Moderna, based in Cambridge, Mass., has never brought a vaccine to market, but company insiders have sold some $248 million of shares – most of them after the company was selected in April to receive Trump funding. (Moderna plans to sell its vaccine for profit although taxpayers have footed its research and development.)

The most blatant involves the venerable old camera and film maker, Kodak. On July 28, Trump announced a $765 million deal with the firm to bring drug production back to the United States. He called it “one of the most important deals in the history of the U.S. pharmaceutical industries,” even though Kodak isn’t even a pharmaceutical company.

Is this sort of insider trading against the law? You bet. The Securities and Exchange Commission is looking into the deal, now temporarily on hold.

But the SEC’s co-director of enforcement, Steven Peikin, who had been investigating several of the deals involving the White House and corporate insiders – including Kodak – has resigned, without explanation. Another in the lengthening list of independent regulators and inspectors general forced out by Trump?

This much is clear: Trump and his Republican enablers won’t provide $600 per week to tens of millions of Americans who need the money to survive the pandemic, because Trump and the GOP believe the money undermines incentives to work.

Yet Trump has no problem letting billionaires illegally profit off the pandemic. He thinks that as long as they buoy the stock market, they’re helping the American economy.

That’s pure rubbish. The stock market is not America. The richest 1 percent of Americans own half the value of all shares of stock held by American households. The richest 10 percent owns 92 percent. For years now, stock prices have risen largely because profits have been siphoned from the wages of ordinary workers.

In the worst economic crisis since the Great Depression, stock prices are almost back to where they were before the pandemic began. Big corporations and major investors are doing fine. Billionaires are doing better than ever. But most Americans are sinking fast.

This isn’t just unfair. Much of it is illegal.

(Robert Reich is the Chancellor’s Professor of Public Policy at the University of California, Berkeley, and a senior fellow at the Blum Center for Developing Economies. He served as secretary of labor in the Clinton administration, for which Time magazine named him one of the 10 most effective cabinet secretaries of the twentieth century. Posted earlier at CommonDreams.org.)