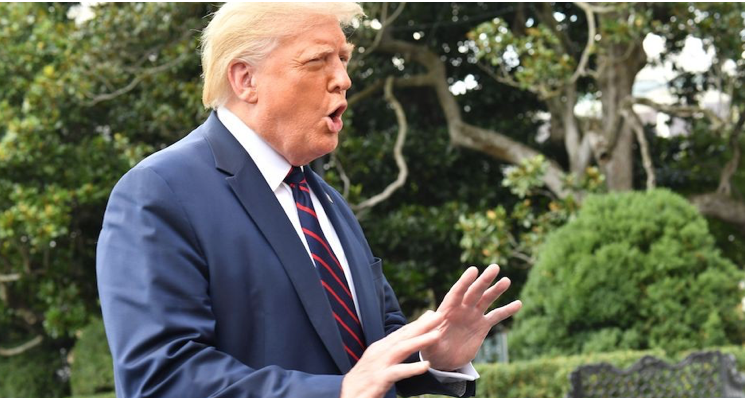 CORONA WATCH--President Donald Trump speaks to the press at the White House on July 27, 2020

The U.S. response to the coronavirus pandemic has harmed the country's standing in the world, with observers calling the policy choices of President Donald Trump to handle the disease "ridiculous" and "shocking" as the crisis exposes the deep flaws in the American system.

As the Post reported, the complete collapse of U.S. institutions in the face of the pandemic has led to a corresponding drop in American worldwide leadership that Kleine-Brockhoff termed the "collapse of soft power of America."

As journalist Grant Stern noted, the current catastrophe and ineffectiveness of U.S. leadership are both part of a longstanding push by the Republican Party to withdraw from the world.

London think tank Chatham House director Robin Niblett termed the crisis and the ongoing protests around the country against the American system as the U.S. "being involved in its own internal reckoning."

"It's America trying to battle with historical and contemporary demons that as much as anything are a result of its own internal contradictions and tensions and strengths and weaknesses," Niblett told the Post. "And it's not all bad. I'm just saying it is like really seeing somebody's psychological flaws exposed at a moment of stress."

Trump's handling of the pandemic has created division and confusion rather than an effective national strategy. The rest of the world sees the United States not as a leader in dealing with the coronavirus but as the country with the highest number of coronavirus infections and Covid-19 deaths, and with the disease far from under control. European nations have responded with the unprecedented step of blocking Americans from entering their countries.

From abroad, the United States is seen as having lost confidence in itself as it grapples not only with the pandemic but also with long-standing political divisions and a racial reckoning over the treatment of black Americans. The perceived loss of confidence among Americans in turn has led others to question the United States' appetite or capacity for a collaborative leadership role at a time when the health and economic crises call out for committed global cooperation.

International youth surveyed on the U.S. response to the pandemic by the New York Times in a video essay echoed the concerns of the experts in the Post story.

"Are they mass graves?" one young woman from New Zealand asks as the video shows mass graves being dug in New York from April. "I'm sorry, America has mass graves?"

Trump's misleadership comes in for particular criticism, with one young man in Singapore noting that while the president is a figure of ridicule around the world, his actions are having a real human cost to the people of the U.S.

"We see the shit that he says. We see the decisions he makes," the young man says. "And it's funny, but when it comes to something as serious as this, it's just—it's not funny anymore."