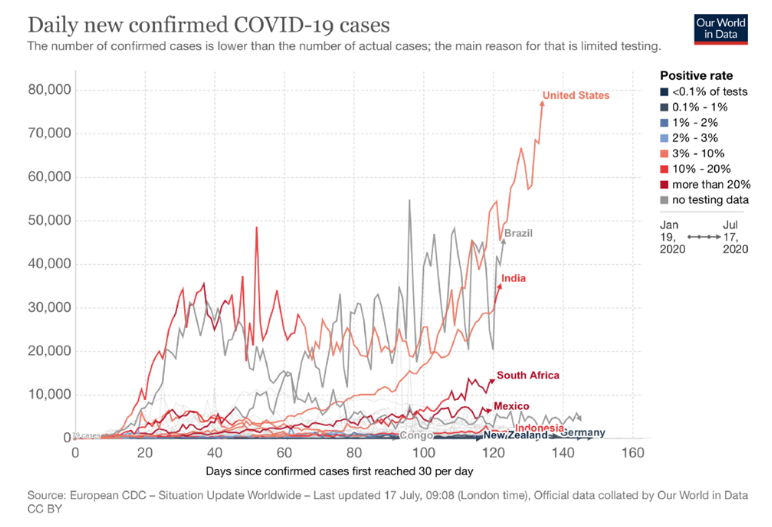 CORONA WATCH--There’s no other way to say it, so let me just speak frankly. Thanks to Donald Trump’s stunning lack of leadership, America’s in a state that can only be described as free fall. Rarely in history has a nation descended into chaos, depression, despair, and mass death at all. But this fast? It’s unprecedented — outside of true authoritarian implosions, that is.

How bad are things in America? Unbelievably, shockingly, incredibly bad. Let’s begin with Coronavirus, and then proceed through economics, to politics and society.

America recorded its highest number of cases ever just yesterday. 76,000. Seventy six thousand. That’s edging perilously close to the threshold at which a society breaks down — somewhere north of 100,000 or so. At that point, schools and universities shut down, hospitals are overwhelmed, depression sets in, job losses go permanent, there’s a widespread and long-term loss of confidence, faith, and trust. “Wait,” you might say, “all of that’s already happening!” Exactly. The threshold is being reached, day by day. A vicious spiral of social collapse is now setting in.

So how bad is 76,000 new cases a day — apart from igniting a chain reaction of social collapse — in global terms? America still has the highest number of new cases in the world — higher than Brazil’s 50K, or India’s 30K. where individual Red States have worse outbreaks than many of the world’s poor countries with far higher populations. Florida, for example, has close to 15,000 new cases alone. That’s more than Pakistan, where even if you quadruple the official number, 2,000, Florida’s close to more than twice that.

Coronavirus is a catastrophe of epic, surreal, nightmarish, global proportions in America. America is now the world’s biggest Coronavirus incubator — and its greatest failure. Sure, Brazil and India are about to give it a run for its money — but that isn’t saying much, only getting to the root of the problem. All these countries have authoritarian, nationalist, neofascist leaders — whose supremacist, Darwinist pseudo-philosophies — the weak must perish so the strong survive — have allowed a lethal pandemic to go thermonuclear.

That brings me to deaths. There was a faction of Americans who, just a few weeks, ago, seemed to glibly believe that even if the virus ticked back up, deaths wouldn’t. The unspoken reasoning was, again, Social Darwinist: “All the weak — the elderly, frail, sick — have been killed off! The death rate won’t go back up! So there’s nothing to worry about!” This was the illogic and amorality of the American Idiot at its most egregious.

The death rate is now spiking back upwards.

The death rate lags the infection rate by about two to three weeks. And so as the virus exploded in America over the last two to three weeks, it was eminently predictable that the death rate was going to spike, too. That is exactly what happened: after a short lag, deaths are now exploding all over again. They are going to continue exploding, just like the daily infection numbers are.

Why? Because Covid is a lethal virus. In America, it has a mortality rate of up to about five percent so far. Now, perhaps that number doesn’t take into account those with Coronavirus who haven’t been tested. Go ahead and make that number lower. 4%. 3%. Fine — half it. 2.5%. That’s still shockingly high. That’s orders of magnitude more deadly than the flu. It’s not the flu. It’s deadly. It doesn’t just kill off the elderly and weak. It kills, period. Sure, you might have a smaller chance of dying if you’re young and strong. Or you might not, depending on how much of a dose you get, and how fast you get treatment. Covid is not the joke it’s been made out to be.

That brings me to political leadership. Nobody much in America seems to have done the most basic work when it comes to understanding Coronavirus, certainly not its leaders. Why isn’t the mortality rate to date — which is unbelievably high — the stuff of everyday knowledge? Even if you want to halve it, by imagining that testing isn’t widespread enough to establish a decent estimate, you still get to a mortality rate of 2.5 percent.That’s still…shockingly high. The flu, by contrast, has a mortality rate of about 0.1%.

And yet when that kind of basic knowledge hasn’t sunk into people’s brains — especially American Idiots — you can expect that people won’t understand they’re playing with fire, and they’re going to get burned.

Nobody is discussing these basic facts because, well, even the good guys are too busy trying to fight the Idiot-in-Chief’s stupidity. A decent President — just a sane and civilized human being, whatever their politics — would have said three things by now.

“This is not the flu, my fellow Americans. This is a killer virus with a mortality rate fifty times that of the flu. You are at real and serious risk of dying, and so are your loved ones. It does lasting damage, too. You don’t want to get this virus. Everything you do these days should begin with that. And then you should think: you don’t want to spread this virus, either. We are in serious trouble, and we need to work together now to get out of it.”

But Trump, of course, hasn’t said any of that. He’s done just the opposite — denied, minimized, pretended it will magically go away, told people to drink bleach…and then he’s headed off to the golf course. What the? So of course Americans have no idea how bad Coronavirus really is — who’s telling them? Not their President. Not their political leaders. And I don’t read about it in the pages of American media, either.

Hence, without an understanding of how deadly and serious this disease really is, three fatal things have happened.

One, America still has no national strategy to beat the virus — without which it will just go on exploding, which is what global success stories like New Zealand and South Korea tell us, having had swift, decisive national strategies. America’s having a Coronapocalypse precisely because even now there’s nothing — nothing — resembling a national strategy of best practices.

Two, the American Idiot has free reign, since there’s no general understanding that yes, Covid really is a killer virus. Just yesterday, the governor of Georgia made it illegal to make people wear masks. Wait, what? Made it illegal not to wear a mask, surely. Nope — to make people wear one. This is the kind of thing that drops the jaws of my friends from…everywhere. Canada, Europe, Asia, Africa.

But the American Idiot is spreading this virus. The American Idiot has turned America into the world’s greatest viral incubator, precisely because there’s no real understanding in America of how deadly Covid is, and so the American Idiot can respond with his usual…idiocy. “Freedom! It’s not a big deal! It’ll go away! Stop being such a p*ssy!! Man up!!”

Somebody needs to say right back to this kind of massive, massive idiot…the truth. Corona is a lethal virus with a shockingly high mortality rate which does lasting and serious damage even if you survive it. It is not a joke. It is like a tiny nuclear bomb: something with the power to wreck a society.

That brings me to my third point. America now stands on the brink of lasting and historic ruin.

While we’ve all been focused on how fast and far the virus is spreading, economically, a shocking and terrible thing has happened. Unemployment claims have stayed north of a million per week…since the pandemic began. This week, again, they came in at 1.3 million.

These numbers are astonishing, jaw-dropping, unreal. How many Americans is that, unemployed now? Easily north of 25%. The weekly numbers are coming in so fast that it’s impossible to say for sure. For now, it’s a Biblical deluge of economic pain with no end in sight.

What does a sudden wave of mass unemployment do? It causes a sudden stop in spending. While much is made of retail sales going back up, that’s neither here nor there — real personal consumption expenditures have fallen off a cliff, and aren’t at anywhere near normal levels. The reason for that is simple: people are getting poorer, as their jobs simply disappear.

As consumption falls, businesses shutter their doors, for good, especially the small and medium sized ones which are the backbone of a healthy economy. There are clear signs that’s beginning to happen, too.

And as that happens, unemployment goes permanent. An economy is poorer for the long-term, less dynamic, creative, fulfilled, employed, able. Bang! Now there’s a depression — another kind of chain reaction, falling spending leading to bankruptcies which causes unemployment and so on.

And that Biblical deluge of economic pain, like the pandemic, is almost impossible to stop, too. At least without a plan. Yet just as there’s no plan to end the pandemic in America, there’s no plan to end the economic pain, either. The $600 a week some Americans — too few — are able to get, after much difficulty, is about to come to an end. They were only offered one week in additional support, anyways. Contrast that with Europe — where, for example, in France, people were furloughed at 80% of their incomes up to about $10K a month, or Italy, which froze mortgage payments and rents. The Trump Administration and Congress have done literally the least they could get away with in America, and the result is that a depression is now very clearly emerging.

And there’s no plan to offer economic help now, at the precisely the moment it’s needed most — when the virus is going thermonuclear, and the tiny, tiny aid package offered a few months ago is running out. What happens then? A massive depression does, just like the which is obviously beginning to hit now. Walk down the street and tell me how many local shops are closed. How many are never going to reopen. Tell me you feel happy and safe and confident spending money these days. I didn’t think so.

America’s in free fall. It’s having a public health crisis, an economic crisis, a social implosion, and a political implosion all at once. And all those things have been brought to you by Donald Trump, whose negligence, irresponsibility, recklessness have allowed them to flourish. He’s had plenty of help from his Army of American Idiots, too — who believe free-dumb is the right to get and spread a deadly virus, like Georgia’s flagrant moron of a governor, who made it illegal to make people wear masks. Trump and his Idiot Army have made America into something even worse than a Third World Country — which is a mildly insulting term, I’m told, but let’s go with it. Even far, far poorer countries are doing better than this combination of catastrophes.

None of this is happening anywhere else in the rich world. It is only happening in countries run by men like Trump — Brazil, India, Russia. But sane and civilized societies? Canada, Europe, New Zealand? They look at America with a kind of horrified disbelief. My European friends literally don’t believe me when they ask, and I try to tell them the state of play in America, because it’s not been allowed to happen in their happier nations. It’s literally beyond their capacity to process. They stand there, dumbstruck.

And yet even far, far poorer countries like Vietnam, or rising ones, like South Korea have beaten back the virus, and are lifting their economies back up. Nobody in the world is in free fall like America.

But America is led by a Psychopath-in-Chief, who’s backed by an Idiot Army, who are fighting for the virus, its depression, its social implosion — not against all that. And so how much more pain is yet to come? Economic, human, social, psychological? So, so much.

(Umair Haque writes for Eudaimonia and Co … where this perspective was first posted.)