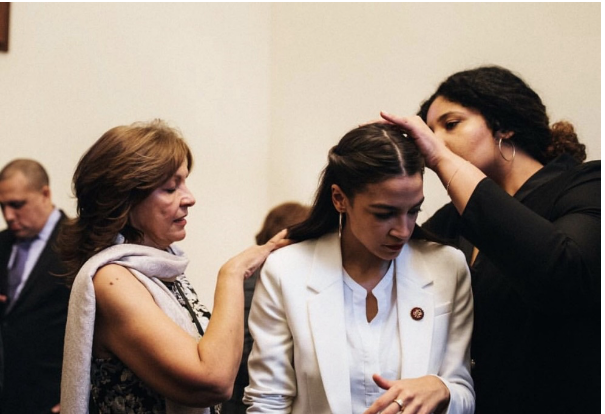 WHAT THEY’RE SAYING--Among politicians all across the United States and even the world, few have even come close to being the force that freshman congresswoman Alexandria Ocasio-Cortez has managed to become in the year that she has held office. Other than Bernie Sanders, I don’t think anyone has restored my faith in the electorate and in the future quite like AOC has.

While those both in the democratic and Republican Party might chastise her victory and minimize what she represents, what she has accomplished is nothing less than historic. As a bright young Latina woman burdened with student loan debt working as a bartender to help save her family home, she made the decision to rise to challenge one of the most powerful democrats in the country for his seat, and took the voices of her district all the way Washington.

Throughout her short time in Congress thus far, AOC has managed to garner up more political capital than almost any other democrat in the country, purely by being a principled voice for her district, always keeping their best interest at heart, and refusing to shy away from a vision for the country that many leftists have been excited to rally behind.

In fact, Bernie Sanders’ campaign could be a testament to her power and character as well. After his heart attack, while he laid in a hospital bed knowing full well that many of those in Washington and in the circles of the media elite were eagerly counting him out, AOC called him to tell him she believed in him, and would be endorsing his candidacy. Since then, he has begun to take the lead as frontrunner of democratic candidates for the Presidency. There’s no denying that the freshman congresswoman played a role in the most critical moment of his campaign, and revitalized it when it needed her the most.

But being principled isn’t always easy, and AOC recently made a decision that I’m sure has raised many eyebrows among her democratic “colleagues”.

She has decided not to give a percentage of her money fundraised to the DCCC (Democratic Congressional Campaign Committee).

According to The Hill:

“In the third quarter of 2019, she (AOC) raised more money than any other House Democrat, including Speaker Nancy Pelosi (D-Calif.). Her most recent federal filing shows that she raked in more than $1.4 million between July 1 and Sept. 30.

While of course this has certain democrats riled, we must consider why she has made this decision.

Undeniably due to AOC’s defeat of Joseph Crowley and other justice Democrat’s like Ilhan Omar and Rashida Tlaib also beating democratic incumbents, the DCCC made the decision that anyone assisting with a primary challenger’s campaign would be blacklisted. Not liking that anyone had the nerve to challenge them, they decided to do everything they can in their power to prevent other Democratic congressional candidates from succeeding in their efforts to challenge incumbents. Should any strategist dare to work with a democrat that feels their district deserves better representation, they will not be hired by anyone associated with the DCCC after that.

Frankly, it’s embarrassing that the DCCC would even expect AOC to hand anything over.

AOC raised more money than any other congressional democrat, because of everything that she has fought for and achieved thus far. The DCCC is doing everything it can to prevent anyone else like her from taking power, and yet she’s expected to hand over $250,000 dollars that she raised so she can be a part of their “team”? She is the antithesis of everything that they have proven themselves to represent, and in all honesty I don’t think her donors would appreciate it if she handed over that money.

The money that AOC raised is not about her. It is about a broader vision, and where she sees the Democratic Party heading. Why would she give that money to an organization who is trying to thwart anyone like her, when she can just give that money directly to congressional campaigns?

In fact that’s exactly what she’s doing, and building her own progressive fundraising instead.

In response to the reports about her decision, she tweeted.

DCCC made clear that they will blacklist any org that helps progressive candidates like me. I can choose not to fund that kind of exclusion.

I’m also not the only one.

Expanding a House majority is critical, which is why I regularly (and happily) fundraise sizeable amounts for fellow members.

I also believe that a Dem majority should be transformative, which is why I give strategically. Seems fair, no?”

Once again, AOC has proven herself to be an incredible, steadfast, and principled leader. It should come as no surprise that a progressive leftist does not want to hand over money from her grass roots donors to an organization that works to silence the campaigns funded by grass roots organizing. Why would AOC hand over money to help re-elect Henry Cuellar, who votes with President Trump seventy percent of the time, when she can donate directly to Jessica Cisneros — a justice democrat — instead? I’m sure my fellow donors to AOC would agree that she serves as far better representation in Congress than Cuellar does.

Truth be told I’m glad my money will be going to candidates who better represent my vision for the future of this country, and not some “vote blue no matter who” elitist, corporatist organization.

(Lauren Martinchek is a writer & leftist with analysis on topics related to politics & policy. She can be reached at LaurenMartinchek@gmail.com)