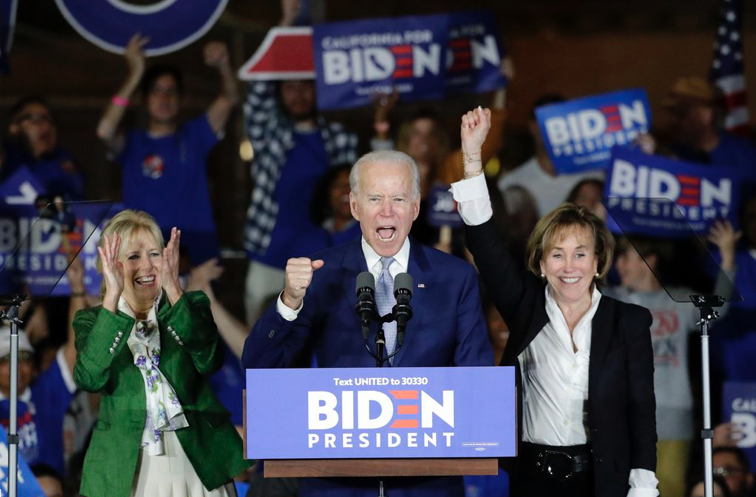 WHAT THEY’RE SAYING-- Primaries can be long drawn-out affairs. The Obama-Clinton struggle of spring-summer 2008 went down to the wire, still being contested in June. As I write Tuesday evening, the delegate count for Super Tuesday is still not known, and the actual count for California could take a long time to nail down.

Joe Biden pulled off a surprise upset, virtually running the tables east of the Mississippi, and doing much better than expected in the big state of Texas. The final delegate tally of the two front-runners may be fairly close in the end. Sanders performed at the top of his game in California (which has about 10% of all the delegates to be had in the race). Warren and Bloomberg may not get that many delegates themselves, given the 15% threshold for gaining delegates in a district. In contrast, Sanders would usually get at least some. It seems likely to be a two-person race hereafter.

Elizabeth Warren and Michael Bloomberg did not perform well. Bloomberg spent half a billion dollars for a very modest number of delegates. He admitted Tuesday that his strategy had been to provoke a brokered Democratic convention and win after a deadlocked first round, when delegates were released from their initial commitments and could swing to Bloomberg as a savior. As things now stand, it seems a little unlikely that this strategy will work (or that it ever could have). There is a danger now that if Bloomberg stays in, he could throw the race to Sanders, which is the very last thing he wants.

Warren staying in through Super Tuesday certainly hurt Sanders a great deal. I hasten to add that it is her right to run for president for as long as she is willing and able, and I’m not criticizing her in any way, just analyzing the outcome. In fact, Informed Comment was happy to syndicate an Andrew Bacevich column in 2018 urging her to run. Although it cannot be assumed that all her voters would have gravitated to Sanders, certainly some would have, and with an extra ten points Bernie would have won some states he lost. If she departs after coming in third in her home state, that will help Sanders going forward.

Sanders performed well below the polling. Polls had him competitive in Virginia, where he was crushed by Biden. Polls showed him winning Texas, whereas that turned into a close race.

Polls showed some improvement for Sanders among African Americans, but in reality he typically only attracted 16% or 17% of their vote. That is a big problem. African Americans comprise roughly a fourth of Democratic Party voters and if you can’t excite them to come out and vote in big numbers, you are in danger of losing to the Republican candidate in the generals. Indeed, that is my read on how Trump defeated Hillary Clinton in Michigan in 2016. Clinton did not bother to campaign in Detroit and just generated little excitement in that city, which suffered a substantial fall-off in turn-out compared to the Obama years. The Black vote over all in Michigan fell by about a percentage point in 2016, and if that had not happened, Clinton would have won the state. The results of Super Tuesday raised questions about Sanders’ viability in the generals because his campaign just never built out in the African American community, unlike the campaign’s impressive outreach to Latinos.

If the Biden momentum continues in subsequent contests and he becomes the Democratic standard-bearer, that has some big policy implications.

Biden is a decent man. I once testified before him in the Senate, and I think he has a good chance of defeating Trump precisely because he attracts the white working class, African Americans, and the older voters who tend actually to show up at the polls (youth often don’t). So I’m not hysterical if this is the outcome, though on policy I much prefer Bernie Sanders, who I also think can defeat Trump.

A Biden victory would have big policy implications in the three areas to which I called attention a few weeks ago. These are the climate crisis, the health insurance crisis, and the wealth inequality crisis. Democratic voters in exit polls have consistently said that health care is their number one concern. The climate crisis also ranks high. Even CNN admitted that in California, where Sanders did very well, “A majority of California Democratic primary voters called for an overhaul of the economic system in the United States, expressing support for single-payer health care and free college. A majority said they had a favorable view of socialism.”

As for the climate emergency, Biden has an 84 rating from conservation groups on his environmental voting record. Last summer, his campaign belatedly embraced the key elements of the Green New Deal. Indeed, his plan is to spend $1.7 trillion fighting the climate crisis, using monies generated by reversing Trump’s 2017 tax cut for the rich. That’s a plan I could get behind.

Biden is not as alarmed at the climate crisis as Sanders is, but has supported good policies on carbon. He favors increasing automobile fuel efficiency, trying to close down coal power plants because of their massive CO2 emissions, imposing economic penalties for carbon dioxide emissions, encouraging sustainable farming and trying to make the US net carbon neutral by 2050. Still, Biden sometimes has talked about unicorns like “clean coal” or used Obama’s diction of “all of the above” on energy policy (“all of the above” includes hydrocarbons, which means big carbon dioxide emissions that destroy the earth). On the climate crisis, Biden would be miles better than Trump, though only about 66% as good as Sanders. Sanders wants the US to get to some goals by 2030 rather than 2050, and the alarming and unexpected rate at which global heating is proceeding makes Sanders’ urgency the more prudent approach.

On health insurance, Biden rejects Medicare for All and instead supports an expansion and shoring up of the Affordable Health Care Act or Obamacare. Healthline reports:

“Biden’s plan proposes to “lower out-of-pocket costs for many people, but there would still be deductibles and copays that some people would no doubt find unaffordable,” said Larry Levitt, the Kaiser Family Foundation’s Executive Vice President for Health Policy. ‘It would certainly expand coverage but likely not get fully to universal insurance.’ ”

If Biden can get through his proposed changes in Congress, that would help tens of millions of people whose health care Trump is trying to take away. But Biden’s approach will also leave millions without proper health care, which is unacceptable in a civilized society.

On the crisis of wealth inequality, I’m not sure Biden would be all that much help. He leads Democrats in Wall Street funding. It is true that he wants to undo the big 2017 tax cut passed by Trump, which has mainly benefited the super-rich and will over time greatly add to inequality. But the crisis of wealth inequality was already really bad in 2016. Biden recently finally addressed the student debt crisis, but only tepidly. He wants to deal with it in future by making the first two years of community college free and encouraging students to start there and then transfer to four-year colleges. He offers debt forgiveness only after 20 years of debt repayment (most of that will have been interest).

So on three big issues of major concern to the public, Biden ranges from being fairly good to being wholly inadequate. Sanders is superb on all three.

(Juan Cole teaches Middle Eastern and South Asian history at the University of Michigan. His new book, The New Arabs: How the Millennial Generation Is Changing the Middle East (Simon and Schuster), will officially be published July 1st. He is also the author of Engaging the Muslim World and Napoleon's Egypt: Invading the Middle East (both Palgrave Macmillan). He has appeared widely on television, radio and on op-ed pages as a commentator on Middle East affairs and has a regular column at Salon.com) This piece originally appeared on Informed Comment.