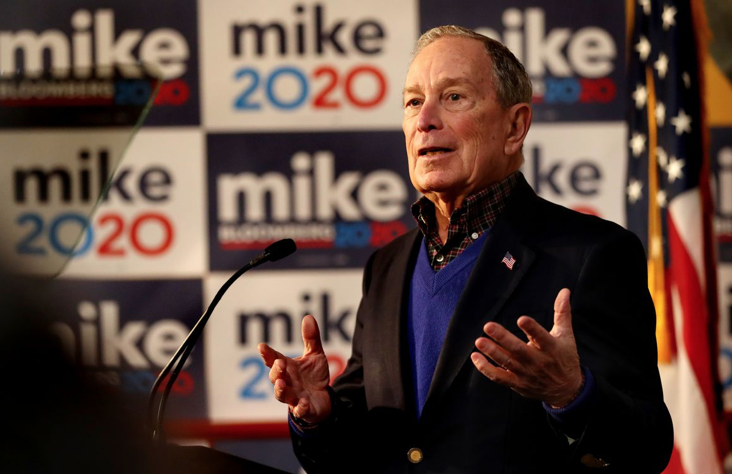 WHAT THEY’RE SAYING--Right off the bat, I must disclose my perspective: I am a lifelong liberal Democrat who was an early and enthusiastic supporter of Elizabeth Warren’s. I am very concerned about income inequality and the influence of money in politics. I would really like to see a woman lead the Democratic ticket, and I think we need a person of color either at the top of the ticket or as the running mate. Although I favor gun control, it is far from the top issue I care about.

Based on the above, you can see that I am no Bloomberg fanboy. He is not a dedicated partisan, as I am. His commitment to economic equality is not at the level of Warren or Sanders. He is an older, white male. He is trying to buy the nomination. The issue he appears to be most passionate about is gun control.

As a result, it gives me no pleasure to write that Bloomberg is likely to be our nominee. As anyone who follows my posts knows, I have long been skeptical of Biden’s candidacy. I intend to enthusiastically support whoever the Democratic nominee is because… well… need I say more? But Bloomberg?

I know right now that the Bernie bros are ecstatic. Bernie’s win in New Hampshire makes him seem ascendant. But if there is any fact that comes clearly out of the results in both Iowa and New Hampshire, it is that Bernie’s in trouble.

Consider the following. In Iowa, Bernie won the caucus on the first vote with 24.7 percent of the vote. That should have been the end of the story, but in caucuses, the supporters of any candidate who gets less than 15 percent of the vote on that first ballot must pick another candidate for the second vote. On that second vote, Buttigieg won with 26.2 percent. In other words, most of the supporters of lesser tier candidates went to Buttigieg, not Bernie.

That’s Bernie’s problem. He has loyal and passionate supporters to be sure. That group makes up about 25 percent of the Democratic base according to most polls. What has benefited Bernie is that the supporters of “other than Bernie” are divided among more than twenty candidates. As the field narrows, it will turn into a field of Bernie versus one or two other candidates. Suddenly, Bernie’s 25 percent won’t be looking so good.

The fiasco in Iowa helped nobody. Remember that Iowa and New Hampshire matter little in terms of the number of delegates allocated. How they matter is in the impression of momentum and electability that they create. The aim of a presidential candidate campaigning in these early states is to stand on the stage in front of cheering supporters celebrating victory on national T.V. Such images have led to winning campaigns for John Kerry, Barack Obama, and Mitt Romney, to name a few. Nobody had that opportunity after this Iowa caucus.

Finally, the candidates currently leading the field have little support among Black voters, a critical constituency in the Democratic primaries. These are the voters who helped Hillary Clinton prevail over Sanders in 2016, and Biden has been counting on them to save him after his miserable early state finishes. But like any voters, people of color don’t want to see their vote wasted. If they believed Biden is out of the race, as he appears to be, they won’t rally to his rescue. After all, Black voters were skeptical of Obama’s 2008 candidacy until he showed he could win in Iowa. After that, they rallied to him, helping him defeat Clinton.

So we are faced with a situation in which the Democratic candidates are coming out of New Hampshire with no clear leader, or even leaders. At this point, Sanders and Buttigieg look equally strong, while Klubuchar had a surprising finish in New Hampshire, and Biden still can’t be written off. Nobody is coming into Nevada and South Carolina with real momentum.

That’s where Bloomberg comes in. He has been campaigning in the states that come right after New Hampshire and Iowa. These are the states where most of the Democratic delegates will be awarded. The latest polls show Bloomberg surging nationally, in Nevada and South Carolina, along with the Super Tuesday states. If Biden doesn’t win South Carolina, and the polls have him dropping like a stone, his campaign is over. Who has been picking up the support Biden’s losing? Bloomberg. (Read the rest.)