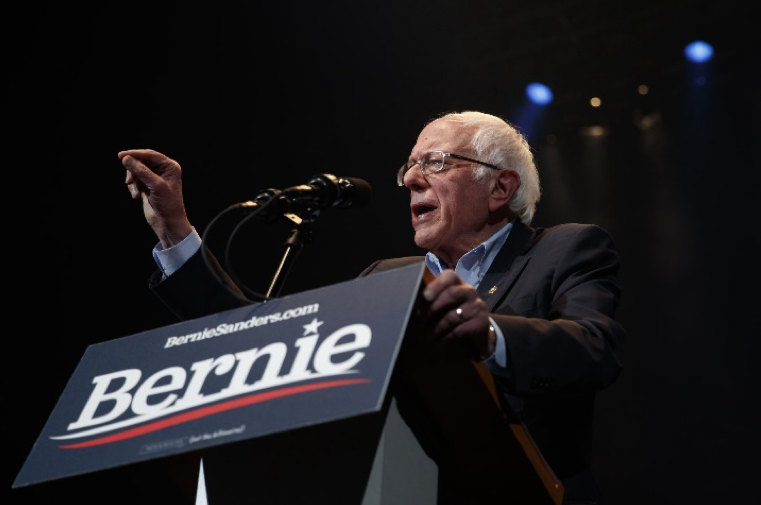 WHAT THEY’RE SAYING--One of the clearest ways to see America’s collapse is through the lens of its eerie mirror image: the Soviet Union.

The similarities, by now — ideology, a collapsed middle, masses living in shortages of basic goods, elites too arrogant and clueless to understand, much less care — should be striking to any thoughtful person. And those resonances lead me to ask a tiny question: is Bernie America’s Gorbachev?

Gorby, of course, was the Soviet leader who famously finally gave up on communism. He had the courage and wisdom to stand up to an establishment that by that point was something between a fossil, a corpse, and a zombie — undead, yet not quite living, ravenous, yet insatiable, and thoughtless, yet capable only of repeating the same old failed ideas. Sound like America yet? I thought so.

(Of course, there are a lot of ways Bernie isn’t like Gorbachev. Gorby was an insider, Bernie isn’t. Bernie’s, well, justifiably angry…Gorby wasn't. Gorby was an intellectual’s politicians…Bernie’s a prole’s. Etc. And I’m going to gloss over a lot of Soviet and post-Soviet history, for reasons of brevity. And yet there are genuinely eerie similarities, too.)

Gorbachev, famously, ushered in two great reforms: “glasnost” and “perestroika.” Each was separate, but built on the other. “Glasnost” meant, finally, transparency and openness about institutions, and their failures. Think of it as something like a clear accounting for all those resources that, instead of going to baking bread, ended up lining the pockets of apparatchiks, little chieftains in the Soviet empire. Glasnost, in Bernie’s case, can be thought of as something like a clearer accounting for why CEOs earn 300 times the average worker, instead of 30 times, like in Europe — or why “hedge fund managers” earn a thousand times what teachers do — a public discussion, investigation, and then resolution, to fight corruption, greed, and institutional dysfunction.

“Perestroika” is probably easier to understand for Americans — it meant “economic openness.” That is, the Soviet Union would finally allow private enterprise. In the Soviet Union, you see, something as small and simple as setting up a humble dry cleaning shop was against the law. Perestroika meant that people could run tiny, tiny businesses like that, in a set number of categories. It might sound small — and it was — but it was nonetheless a revolution.

Now think about America. Just as the Soviet Union was once so ideologically extremely set against private goods, dry cleaners were illegal, so today America is so ideologically extremely set against public goods that people have to beg each other for money to pay absurdly high healthcare bills online. Do you see how weird and eerie and precise the mirror image is? Then let me continue.

Just as Gorby wanted to bring a tiny, tiny amount of economic openness to the Soviet Union, making the economy slightly more private, so too Bernie wants to bring just a tiny amount of publicness to America. He’s painted as a “socialist” by the American press — the same folks who happily cheered on Trump. But Bernie, in truth, barely qualifies as a lightweight European social democrat. He doesn’t want to, for example, build an American Healthcare Service, like Britain’s NHS, publicly employing a million doctors and nurses, on the government payroll — he just wants to extend Medicare. Do you see the difference?

Like Gorby, Bernie wants to bring Perestroika and Glasnost to America. Freedoms, of a new kind — openness, transparency, choice. But ironically, not from communism — but from capitalism. And like Gorby, Bernie’s not what he’s painted out by the press to be. Gorby was made out to be some kind of cowboy capitalist — when the truth is that he wanted to shift the Soviet Union in the direction of social democracy, not American extreme capitalism. In the same way, Bernie’s not some kind of raging communist — like I said, he barely qualifies as a social democrat, in global terms: instead, he’s closer to something his own, an American “democratic socialist”, which basically means someone who wants to tax the rich to put in place relatively minor institutional and policy reforms (extending Medicare — not the government directly employing a million doctors.)

(And that’s OK, by the way — I say that not pejoratively, but just so that you see things a little clearly. Bernie’s not an extremist — he’s a relatively moderate centrist, at least when politics are seen both historically and globally.)

All that brings me to the wrinkle. You knew there was going to be a wrinkle, didn’t you? Have you guessed what it is yet? It’s simple. Gorbachev failed.

His heart was in the right place, and so was his mind. He was almost alone amongst Soviet leaders in seeing that the system wasn’t working, but failing catastrophically. He did something remarkable: he studied the rest of the world, and decided, therefore, that he needed to change the system. Despite all the trouble and struggle that would mean. It’s not often a failing society sees leadership of that calibre.

And yet, despite all his efforts, Gorbachev didn’t succeed. He failed — despite all his many reforms, intellectual, political, civic. Though he brought down the wall, like Reagan famously asked, and began to reform the economy and society both — today, Russia isn’t something like a modern, rich society, a peaceful democracy, a prosperous nation. It’s a failed state — one of the world’s leading exemplars of the rising tide of authoritarian-fascism. Worse, one of the the world’s great hotspots of rising authoritarian-fascism is in post-Soviet states, from Poland to Estonia. Gorbachev tried — but his failure is all too visible to see.

Are you seeing my point yet? If Gorby failed — what about Bernie, America’s Gorbachev?

So why did Gorbachev fail? There are many, many reasons, and this isn’t a book. I’ll pick out just three. One, institutions were already too corrupt to be reformed. Two, elites didn’t want reform. And three, people had grown too poor and desperate to be led in the direction of progress — enraged, hateful, angry, they were waiting for a demagogue to lead them, to make them…great again. Enter Putin, the chess master of the demagogue’s game.

What’s troubling, when you think about it, is that all three of those trends — and exactly those three trends — are present in America, today, too.

Let’s think about America’s institutions. How…well…Soviet are they?Can anyone really reform a military that privatizes dirty work to mercenaries? How about a healthcare system, which now bills people hundreds of thousands for minor operations? Or how about Wall St, which exists at this point only to fleece people and be bailed out? What about Silicon Valley — which has gotten mega-rich by destroying democracy with misinformation and disinformation? Sure, you can try to reform all these institutions. But it’s going to be an uphill battle. And a lonely one. You will have literally trillions of dollar arrayed against you, not to mention every lobbyist on K St, not to mention every publication and intellectual in America, not to mention every dumbass talking head on CNN and Faux News.

So let me ask again: can American institutions really be reformed, by a lone hero — a visionary Gorbachev? Or is the system’s resistance to reform now too strong?

To answer that question, let’s think about elites. Soviet elites, you see, didn’t want reform — which is why Gorby’s reforms failed. What about America’s? Only someone on Mars would think America’s elites want reform of any kind. To them, the system — extreme capitalism, totalitarian, Soviet-style capitalism…is working just fine. That’s because it is working beautifully, for them. If you’re a lobbyist, you can buy a mansion in Georgetown after a few years. If you’re a pundit, you can move in next door. The system’s never worked better, for American elites — they’re getting rich, fast. What’s the problem? That half of Americans work “low-wage” jobs? That 75% struggle to pay the bills? That 99.9% will die in debt? So what? It must be their own fault!

Hence, just as in Soviet Russia, American elites are looking out for…themselves, in grotesque ways. Soviet elites did what was “rational”, economically: they sold off the state’s public goods, its factories, energy grids, telecom systems, to their buddies. The result was that Russia never developed a functioning modern economy. But do you seriously think America’s elites are going to do anything much different — that they’ll actually pass policies and reforms to benefit anyone but themselves? I don’t. After all — who’s going to stop them? The people?

That brings me to my last and final trend. The ultimate and most powerful reason Gorby’s reforms failed was that…people ultimately just were too poor, desperate, and afraid to see them through. There was an initial wave of euphoria, sure. But then it winked out, into disillusionment and despair.

You see, by that point, the average Soviet citizen was bitingly poor. They faced shortage for the basics of life. They were turning on each other, each Soviet state against the next, people trying to take what they could for their own. There was Gorby promising them abstract, grandiose reforms — that would take a decade or three to really deliver. And along came a demagogue, who told them they would be Great Again, and he’d put them first, and so on — all they had to do was to be a little more violent, ruthless, intolerant, cruel, and bigoted. That was Putin, in case you haven’t surmised. Guess which approach they chose, in the end?

Now think about this. The Soviet Union stagnated for thirty years. That was enough to make people poor and desperate enough to choose demagoguery, forever — to this every day, despite whatever reforms they were offered. You see, to a person who’s grown desperate and bitter, it’s always easier to blame your woes on someone weaker, more vulnerable, a little suspicious, who never quite belonged. Poverty doesn’t make us wise — it just makes us cruel and violent. But America’s stagnated, by now, forfifty years. If it follows the Soviet Union’s lead — just like Russia, it’s people are going to choose demagoguery over reform, because they are just too poor, embittered, broken, and angry now to do much otherwise.

Gorbachev, ultimately, failed — not because he didn’t try — but because he was up against a set of historical forces that were genuinely like a tsunami: impossible to resist. They weren’t just stronger than he was. But stronger the ideas of reform, progress, or a functioning society could be. Those historical forces — stagnation, corrupt institutions, captive elites, people who’d grown poor and angry and violent, lost faith and hope in each other — had been gathering force for decades.

The simple truth of Soviet collapse was this: whatever Gorbachev (and his like-minded successors) promised in the way of progressive, democratic reform…it was doomed to fail. The historical forces of stagnation, corruption, and poverty were too strong. They wiped out any real chance of progress or democracy. How can a nation with corrupt institutions, captive elites, a viciously angry populace, and immense poverty…cooperate in the direction of progress? Come together as a democracy? Choose peace and prosperity and openness over bitterness, hate, and rage? Not melt down as everyone desperately chooses self-preservation — at everyone else’s expense, and everything better’s expense?

And yet doesn’t it seem that all the above is also true of America? If it is, my friends, then Bernie, like Gorby, is probably on a mission that’s doomed, by historical forces far mightier than a lone aspirational leader, to fail. As noble and wonderful as it is.

And the more that I think about it, I can’t help but conclude: Bernie’s America’s Gorbachev. That leaves only one question.

Who will be its Putin?