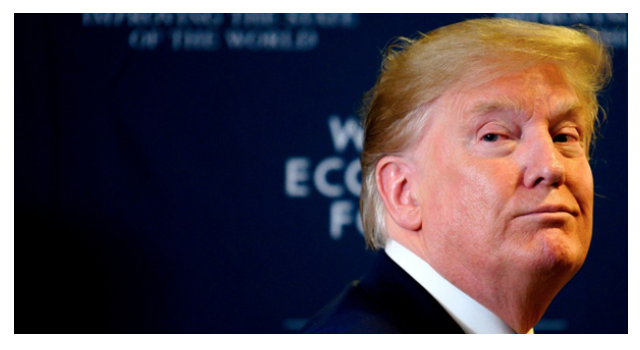 WHAT THEY’RE SAYING--US President Donald Trump looks back as a question from the press is shouted after a press conference at the World Economic Forum in Davos, Switzerland, on January 22, 2020. (Photo: Jim Watson/AFP via Getty Images)

While attending the World Economic Forum's summit of global elites in the Swiss mountaintop retreat of Davos on Wednesday, President Donald Trump openly admitted he would—if reelected in 2020—consider cutting back funding for key social programs including Social Security, Medicaid, and Medicare.

"After a day of hobnobbing with billionaires in Davos, President Trump publicly revealed that cuts to earned Medicare and Social Security benefits will be on the table as soon as the end of this year. The cruel irony of this scene cannot be overstated."
—Richard Fiesta, Alliance for Retired Americans

The remarks came in an interview with CNBC's Joe Kernen in Davos, and although the news outlet did not report them in their initial write-up of the exchange, they were captured in the transcript:

KERNEN: Do I dare— one last question.

KERNEN: Entitlements ever be on your plate?

KERNEN: If you're willing—

KERNEN: —to do some of the things that you said you wouldn't do in the past, though, in terms of Medicare—

For those who needed a translation, MarketWatch columnist Pedro Nicolaci da Costa spelled it out plainly: "Trump told CNBC he wants to cut Social Security."

Reaction from defenders of the key safety net programs was swift.

"After a day of hobnobbing with billionaires in Davos, President Trump publicly revealed that cuts to earned Medicare and Social Security benefits will be on the table as soon as the end of this year," said Richard Fiesta, executive director of the Alliance for Retired Americans, in a statement. "The cruel irony of this scene cannot be overstated."

In the context of the 2020 election, Linda Benesch, communications director for the advocacy group Social Security Works, said Donald Trump ran on a promise to protect Social Security in 2016, "but that was a lie." Since taking office, especially with the help of top aide Mick Mulvaney, the Trump administration has repeatedly signaled its desire to cut funding for the key programs.

"His budget proposals include Social Security cuts," Benesch explained to Common Dreams in an email. "Now, he's flat out saying that he plans to target 'entitlements' (AKA earned benefits.) We need a Democratic nominee who can draw a clear contrast with Trump on Social Security. That will be far more difficult for Joe Biden, who has a history of being open to cuts, than it would be for Bernie Sanders or Elizabeth Warren."

Struggling seniors and retirees, said Fiesta, "need help, not a slap in the face."

(Jon Queally writes for CommonDreams.org … where this piece was first posted.)