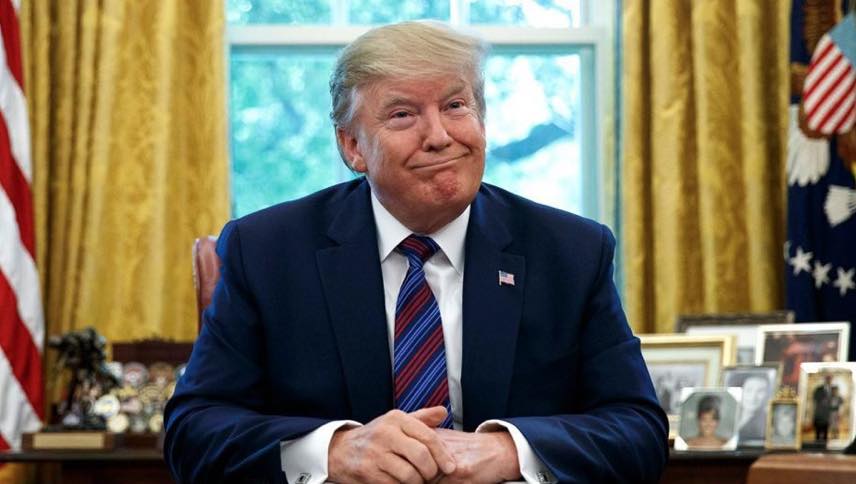 WHAT THEY’RE SAYING--There’s an old joke about how Richard Nixon was the kind of politician who’d cut down an endangered giant redwood, then climb on the stump and make a speech about conservation.

Trump said this, Philip Bump of the Washington Post points out, at a White House event “focused on scaling back the requirements of the National Environmental Policy Act, which, among other things, mandates environmental reviews for federal projects.”

More precisely, another Post article notes, the president is proposing “fundamental changes to 50-year-old regulations in an effort to speed up new mines, pipelines and hundreds of other projects around the country, including some that could harm the environment and accelerate climate change.”

"Trump's threats to Iran's culture sites are symbolic of a shortsighted and withered soul—his attacks as irrational as the personal and petty invective he hurls at those who speak against him, and as wild and flailing as the unthinking decisions he makes, one more preposterous than the next."

If your forehead isn’t already numb from years of smacking it in grim disbelief, Trump also told those in attendance at his announcement that, “Somebody wrote a book that I’m an environmentalist and actually called, ‘The Environmentalist’, actually, before I did this… I’ll bring it to my next news conference, perhaps. I’m sure you’ll be thrilled to see it. I’m sure you’ll report all about it.”

Turns out that the book, Donald J. Trump: An Environmental Hero, came out in 2016 and was written by Edward Russo, a longtime flunky of the Trump Organization and a used-to-be minor New Jersey politician. Russo was an “environmental consultant” for Trump’s golf courses, resorts long criticized for ecological abuse.

But as the head of the New Jersey Sierra Club observes, Trump is “clearly the worst president in history when it comes to the environment. He has tried to destroy the EPA, ignored or violated environmental laws, and put public health at risk. He has stifled new technologies and jobs in green industries, and his rollbacks are endangering public health and increasing health costs.”

This is, of course, all part of the pattern of mindless avarice that has characterized this White House, a wanton display that willfully dismisses scientific evidence or any academic judgement at all as the ramblings of an elitist few—“the pointy headed intellectuals” once mocked by George Wallace and others ever since—and always to the cheers of disaffected, usually white male voters.

Yet another other aspect of this bleak and deeply cynical worldview has arisen during the current Iran debacle—a stated willingness by Trump to attack culture sites, among others in that country, if “Iran strikes any Americans, or American assets.” Presumably, these would include some if not all of the 22 places in Iran designated by the United Nations as World Heritage sites.

By international and U.S. law, any such incursion would constitute a war crime, and even those around Trump know it, but when criticized, he simply reiterated the threat: “We’re not allowed to touch their cultural sites?” he asked. “It doesn’t work that way.”

"[M]ovable or immovable property of great importance to the cultural heritage of every people, such as monuments of architecture, art or history, whether religious or secular; archaeological sites; groups of buildings which, as a whole, are of historical or artistic interest; works of art; manuscripts, books and other objects of artistic, historical or archaeological interest; as well as scientific collections and important collections of books or archives or of reproductions of the property defined above."

This means museums, churches, schools and other facilities designed to house cultural treasures as well.  But beyond the clear illegality of targeting such invaluable places and things, Trump’s threats illustrate the moral bankruptcy at the heart of his White House.

Here in New York, we’ve always known how petty and unthinking Trump is when it comes to preservation and protection: back in 1980, he promised to save historic art deco friezes that were on the walls of the Bonwit Teller department store building he was tearing down to build Trump Tower. He said he would donate them to the Metropolitan Museum of Art but instead jackhammered the priceless pieces into bits to save some construction time.

On the grand scale of things, perhaps not such a big deal, but an early local indicator of a callous indifference to what others value and care about. As art and architecture critic Philip Kennicott recently wrote, Trump with his threats against Iran now “has told the world that everything is on the table, including the deliberate targeting of things that bear in them the accumulated emotion and artistry of centuries, things that are invaluable and can never be replaced.”

The line Trump crossed “isn’t between one set of cultural values vs. another; it isn’t between people who speak our language and those who speak all others. It is between culture and the void, between the many and variegated ways in which different people try to live together peacefully and productively, and the pure nihilism of autocracy.

“The threat wasn’t to Iranian cultural sites. It was to culture.”

Art and culture are symbolic of a nation; trying to eliminate them the act of thugs and terrorists, like the Taliban’s 2001 destruction of the Buddha statues in Bamiyan or the 2015-17 ISIS attacks on the ancient city of Palmyra in Syria (which included the public beheading of the site’s 82-year-old head of antiquities).

Trump’s threats to Iran’s culture sites are symbolic of a shortsighted and withered soul—his attacks as irrational as the personal and petty invective he hurls at those who speak against him, and as wild and flailing as the unthinking decisions he makes, one more preposterous than the next.

Lacking any sense of history or empathy, contrast Trump’s words and deeds with President John F. Kennedy, who said there was “little of more importance to the future of our country and of civilization than full recognition of the place of the artist,” and in a speech at Amherst College less than a month before his assassination, dreamed of “a future in which our country will match its military strength with our moral restraint, its wealth with our wisdom, its power with our purpose.

“I look forward to an America which will not be afraid of grace and beauty,” Kennedy declared, “which will protect the beauty of our natural environment…  an America which commands respect throughout the world not only for its strength but for its civilization as well.”

I know, many of those who make up Trump’s base don’t care a bit about any of this—and why would they? Many are blinded to such things by prejudice, anger, fear and yes, ignorance; others have such troubles of their own there is no room in their difficult lives for anything else—just trying to make ends meet takes all their attention.

They somehow think a bullying despot can fix that. But to pay by sacrificing those things that make a society distinctive and exceptional, to be willing to let them be obliterated out of spite, to submit to the lies and whims of a man who takes pleasure in belittlement and destruction diminishes us all.

No good can come of this.

(Michael Winship is the Schumann Senior Writing Fellow for Common Dreams where this perspective was first posted.)