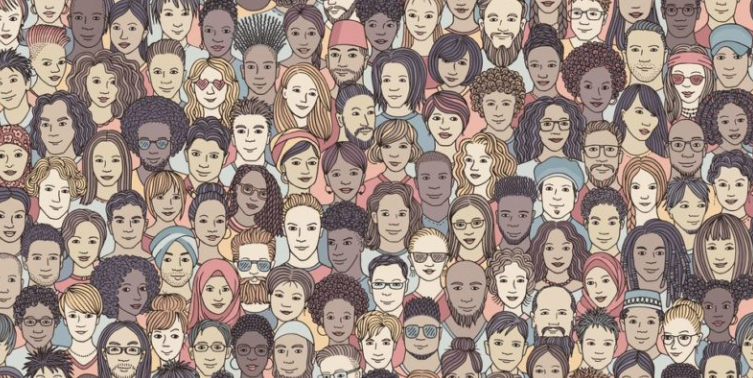 SAY WHAT?- Sir David Attenborough, the 95-year-old legendary wildlife filmmaker told Anderson Cooper on 60 Minutes: “A crime has been committed” and that urgent action is needed to save nature to save ourselves. The crime rests on oil for allowing the world to populate so proficiently the last few centuries and giving Sir David the opportunity to attain the ripe old age of 95 and to travel the world more than most.

In the 1800’s most people never traveled 100-200 miles from where they were born. Life expectancy throughout Europe hovered between 20 and 30 years of age. Food shortages and insecurity were leading concerns in the 18th century, especially in Europe, and these were exacerbated by reduced harvests yields. Disease was another leading cause of death, with rats and fleas being the common carriers of disease, specifically plagues, during this era.

SAY WHAT? - Fast running out of boogeymen and deranged conspiracies - Dr. Seuss, Mr./Ms. Potato Head, trans girls playing sports, Karl Marx and his evil spawn antifa, Italy and/or dead Hugo Chavez flipping elections, cancel culture warriors of any flavor - and bereft of principles or policies, a flailing GOP has feverishly glommed onto Critical Race Theory as the latest Scary Threat to American democracy, in the process miraculously failing to realize it's actually them. A 40-year-old, once-obscure academic concept developed at Harvard, CRT acknowledges the fundamental role of racism, and its accompanying inequality, in every aspect of American society, from legal systems and social structures to economics and education; common examples are the ways racism led to housing redlining in the 1930s, and still informs today's college admissions, income inequity and incarceration rates. But confronting the systems behind white supremacy, the narratives white people tell themselves to justify it, the way power and privilege work to support it can create fear - economic, social, cultural, racial - in those threatened by any change in the status quo, especially when they're busy trying to suppress the votes of those who would benefit. It's a lot - complex, nuanced, potentially hazardous - for a party of morons like Marjorie Taylor Greene who conflates Democrats with Nazis 'cause, see, they both have "Socialist" in their names, sort of. Thus flattened by idiotic branding, some say the end game is "to have the public read something crazy in the newspaper and immediately think 'critical race theory.'" In those wee little brains, little wonder CRT becomes "any conversation about race I don't like," "hostile to white people," and "teaching kids to hate each other and our country" - which is the greatest, even though for centuries it did buy, sell, own, rape, abuse, exterminate and otherwise oppress hundreds of thousands of people who, according to a social construct, had the "wrong" color skin.

SAY WHAT-While COVID cases are down and vaccinations are up, huge swaths of this ostensibly great country remain vulnerable to deadly new variants like the Delta strain thanks to the peculiarly American phenomenon of a "golden age" of perilous, obstinate, lunatic anti-vaxxers entertaining a mix of "conspiracy theory Mad Libs" that normal people who actually believe in science deem "dubious," "wholly unfounded," "grossly distorted," and insane. Facing a flood of wild claims that "The Vaccine Is A Microp-Chip Delivery Tool" and "COVID Vaccination=Death," social media executives are playing a frantic "cat and mouse" game with an "empire" of up to 58 million believers on hundreds of websites largely dominated by a "Disinformation Dozen" of anti-vaccine crackpots. "The United States hosts the world's largest and best-organized anti-vaccine groups," warns one, and "the bad guys are winning"—in part, he charges, due to the reluctance of public health officials to acknowledge the reach of anti-science mobs or confront them from fear of giving them "a platform and oxygen." Even though WHO recognized vaccine hesitancy as a key threat to global health even before the pandemic, the ever-growing proliferation of organized, extremist, anti-vaccine groups spreading lies—including the whopper to the black community that vaccines are "medical racism"—render even targeted counter-messaging "drops in a vast sea of misinformation." 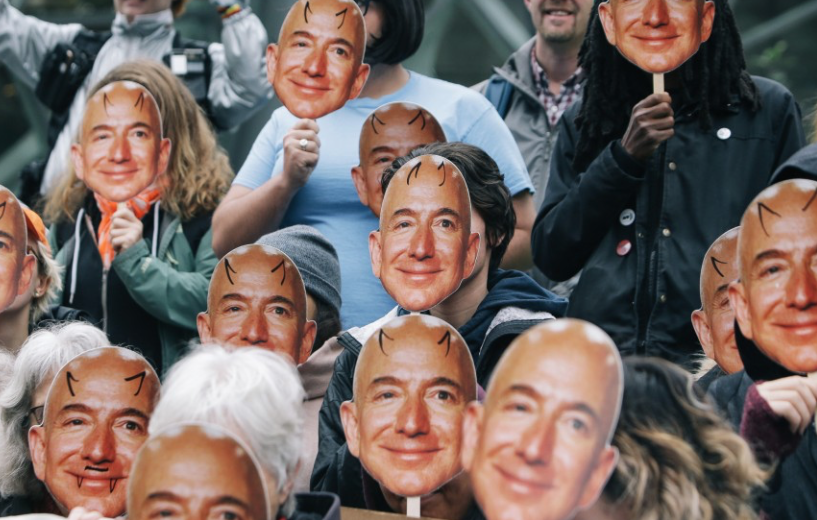 To mark the one year anniversary of Amazon's extended temporary moratorium on sales of its controversial Rekognition facial identification software to law enforcement agencies, over 20 advocacy groups and more than 10,000 supporters on Thursday launched Protest Amazon, a digital demonstration that's part of the #EyesOnAmazon week of action.

"Amazon must make their moratorium on keeping Rekognition out of the hands of law enforcement permanent and extend that policy to all of their surveillance products." —Myaisha Hayes, MediaJustice 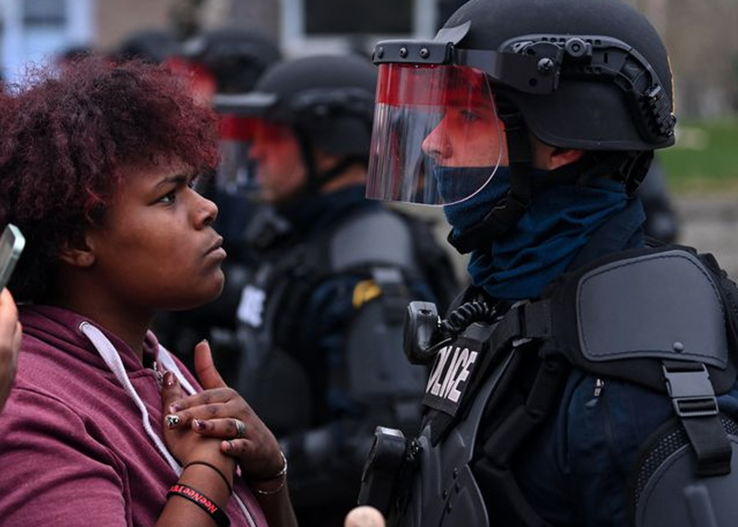 MEDIA WATCH--A year after the painstakingly prolonged public execution of George Floyd, America is caught between hope and despair at what comes next, with the much-touted racial reckoning of a country possibly finally ready to acknowledge "the blood at the root" of a vexing origin story slamming into recalcitrant racist reality on all sides.

Many Confederate statues have come down, and more Americans have been speaking, reading, thinking about racism. Still, says Donald Williams, who witnessed Floyd's murder and "called the police on the police" - his anguished charge, "Y'all are murderers, bro" played at Chauvin's trial - the trauma remains. (Photo above: Facing off against America's systemic racism. Photo by Joshua Lott.)

"I don't think most of America understands," he says. "They kind of see it and hear it, but I don't think they fully understand." Little wonder, given our bloody history and a current, panicked, right-wing move to rewrite it. 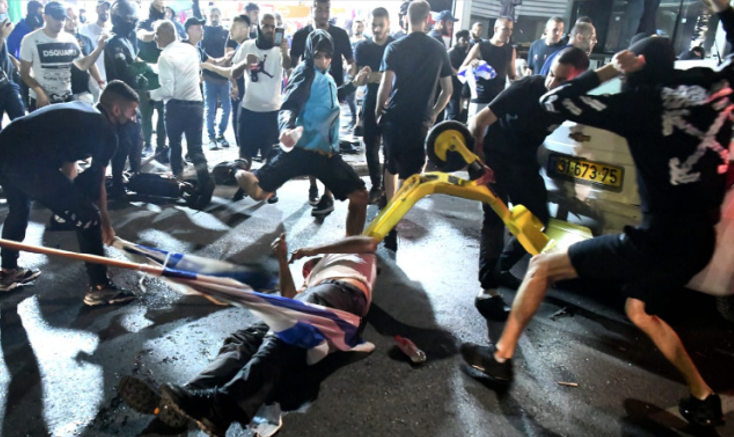 MEDIA WATCH--A ceasefire from the slaughter in Gaza is good news. It's also woefully inadequate, given it comes with "an inevitable expiration date" amidst the Occupation's "normal" reign of apartheid and horrific, bloodthirsty, ever-new sins visited upon besieged Palestinians. (Photo above: Jewish rioters lynching Said Musa, an Arab man, in Bat Yam. Photo by Reuven Castro)

Add to the 14 Gaza families killed in their  homes, the 17-year-old shot in the head and radio journalist targeted in an airstrike and wheelchair-bound man killed with his pregnant wife and three-year-old daughter as they were preparing lunch and hundreds of others; add to the 75,000 people now homeless and the barrage of murder, eviction, random arrest, illegal incarceration, litany of indignities daily endured by Palestinians - add to that the virtual lynching’s of Arabs in what turn out to be tenuously mixed cities by frenzied, emboldened, rampaging, knife-wielding mobs of Israeli extremists, abetted by media and politicians, spewing "Death To Arabs" and vowing, "Kill them one by one,"  which they sometimes do by dragging them from their cars. 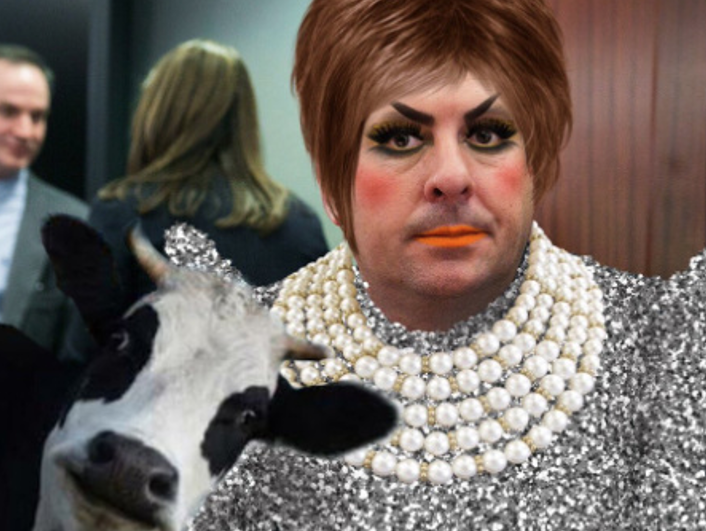 MEDIA WATCH-In an "extraordinarily hackish" move (among many), newly unsealed court documents show that, near the ragged end of his reign of terror, the former guy and Bill Barr's Department of Justice (sic) sought to use a covert grand jury subpoena, the federal machinery behind it and your money to unmask, not violent cops or white supremacists or corporate crimes, but Twitter pranksters saying mean things about faithful lapdog, litigious snowflake, friend to insurrectionists and "proud graduate of smiling for beginners" Devin Nunes - all while in the gleeful guise of, variously, his cow, his mom and his Drag Queen self. Inexplicable head of the House Intelligence Committee representing California's 22nd District - whose constituents he hasn't met with for years - Nunes is known for his sordid history of defending/denying Russian tool and former guy's abuses so zealously some wonder, when Il Duce goes to prison, if Nunes will turn up during his first body cavity search. The author of a bill denouncing frivolous lawsuits, Nunes has spent much of his time in Congress filing frivolous  lawsuits - nine at last count - against people and organizations that hurt his feelings, expose his hypocrisy and call him mean things like "a treasonous cowpoke." 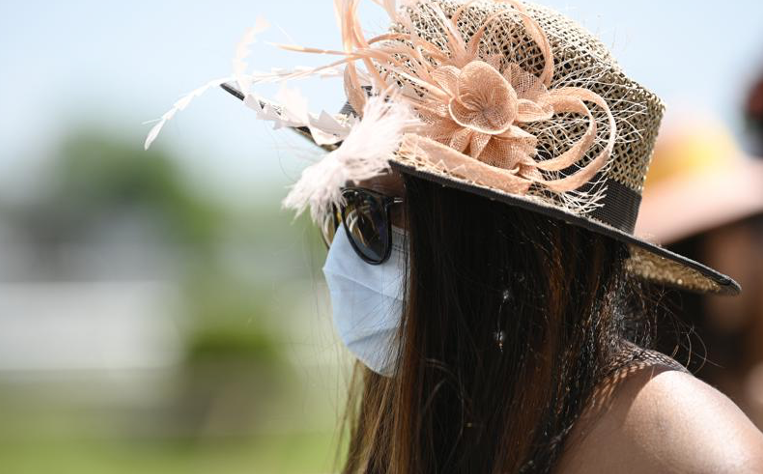 MEDIA WATCH--Like more than 120 million other Americans, Jan Massie is fully vaccinated against COVID-19 and can pretty much give up wearing a mask under the latest guidance from the Centers for Disease Control and Prevention. But she’s still covering her face, even as the temperature rises in her native Alabama, because of benefits she says are too great to give up.

The retired educator didn’t catch the illness caused by the new coronavirus, and she also didn’t get the flu or her twice-yearly colds while masked during the pandemic. Unlike some, she’s not gotten any hostile blowback in public for wearing a mask. So why quit now? 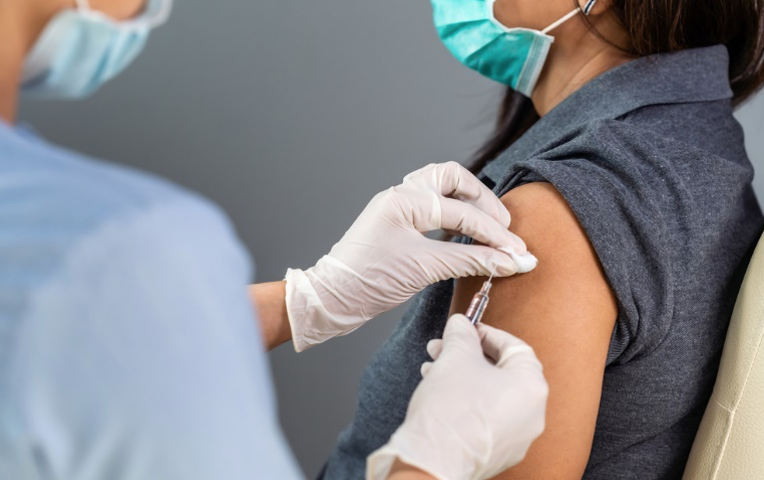 MEDIA WATCH-Have you gotten your vaccine yet? If it helps, let me tell you about mine.

I just got the Johnson & Johnson vaccine. The side effects weren’t pleasant, but they were manageable — I had about six hours of flu-like symptoms that started six hours after I got the shot, then a headache in the morning. Tylenol helped.

I wasn’t excited about getting the shot. I’m wasn’t worried about the less than one in a million chance of blood clots, but I expected the flu-like symptoms and the headache and I dreaded them.

But I am still happy with my choice. 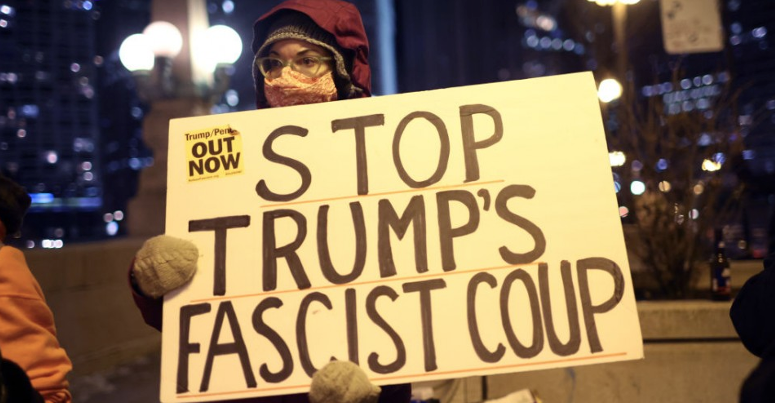 MEDIA WATCH-America prefers to look forward rather than back. We're a land of second acts. We move on.

This can be a strength. We don't get bogged down in outmoded traditions, old grudges, obsolete ways of thinking. We constantly reinvent. We love innovation and disruption.

Trump is consolidating his power over the Republican Party, based on his big lie.

The downside is a collective amnesia about what we've been though, and a corresponding reluctance to do anything about it or hold anyone accountable. 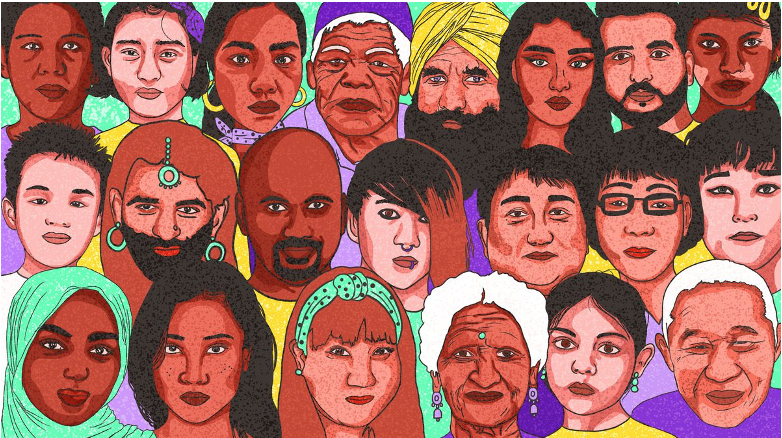 “I was told that I am Asian American when we came here,” says Suong, a Cambodian refugee who immigrated to the US as a child. “But I faced a lot of colorism, a lot of classism, and not a lot of understanding about who Southeast Asians are and how we fit into the Asian American context.”

Suong and his family were among tens of thousands of refugees who fled during the Khmer Rouge regime in Cambodia, eventually settling in the Boston area. When he arrived in the US, he struggled to find where exactly he fit in a country where everyone from teachers to neighbors made him feel unwanted.

“Growing up for me, I felt so disempowered,” he told Vox. “I was always wondering why people in my community were getting harassed and being thrown in jail by the police.” 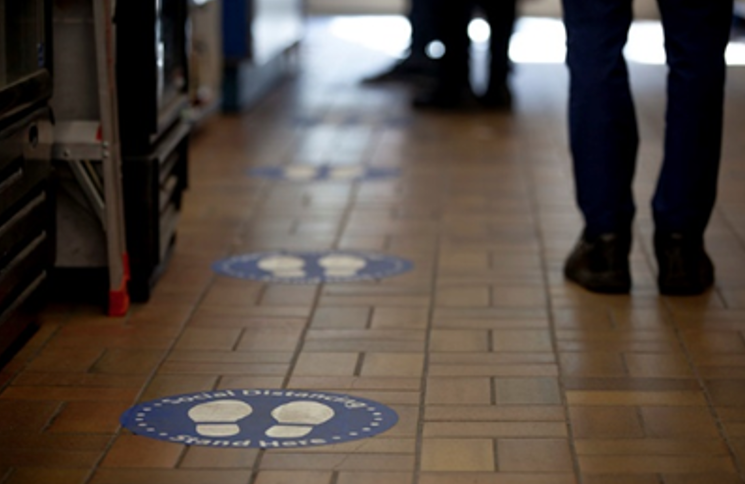 MEDIA WATCH--We have seen a lot of people waiting in lines lately, most abundantly to acquire a vaccine to quash a global pandemic. Despite the intentions of a democratic process, low-income areas have faced profound disparities and some downright selfish inequity. Evident are the challenges to meet this need and to achieve mass efficiency in service of saving lives and hastening a return to normalcy in society. As I inched forward in my car at Dodger Stadium for my first and second shots, I thought of the other lines, much less just and over-represented with the poor and destitute.

Every time I see or hear of people forced by hunger to line up for giveaway meals, clothing, medical care, shelter beds and other basics of life, the thought recurs that charity is an awfully dubious salve for poverty. Few events drive home this truth quicker than last December’s dithering in the White House and Senate over what size of a bone to toss those millions struggling through the Great Pandemic amid the long-awaited death spiral of a White House rightfully deserving of the pronouns I, Me, and Mine.