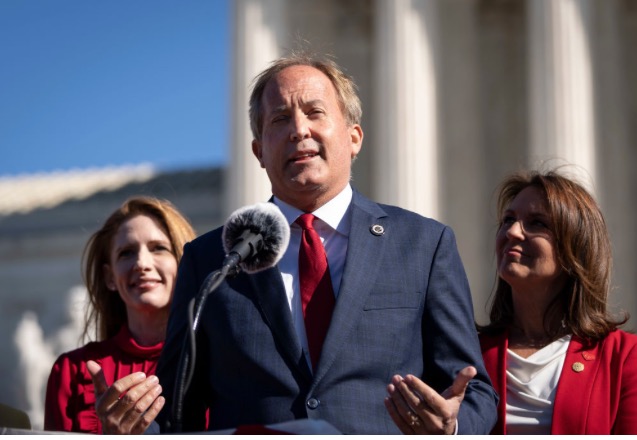 ABORTION RIGHTS - Texas Attorney General Ken Paxton is the top law enforcement officer and a zealous anti-abortion crusader in a state that has become ground zero in the right’s efforts to eliminate access to the procedure.

Abortion bans, like the one in Texas, put women’s health at risk and are likely to increase maternal mortality, according to recent studies.

Yet Paxton and other anti-abortion elected officials continue to receive hundreds of thousands of dollars in health care industry campaign contributions through direct fundraising and through a political action committee that bundles contributions. Drug manufacturers, hospital groups and insurance companies are some of the largest donors to anti-abortion candidates for attorneys general via the Republican Attorneys General Association.

The Texas Medical Association has contributed $48,745 to Paxton since 2005, including $5,000 in 2022. TMA represents the very doctors whom Texas prosecutors can now charge as felons for providing abortion care. The political action committee of DHR Health, a Rio Grande Valley hospital chain, where a doctor recently had to weigh his potential prosecution under the ban when deciding whether to administer an emergency abortion, is Paxton’s largest medical industry contributor. The physician-owned hospital chain donated $50,000 to Paxton this election cycle and more than $260,000 to his campaigns since 2005.

Paxton’s actions have contributed to creating an environment that has turned the lives of patients seeking abortion care and their doctors upside down, according to doctors and advocates.

“We’re talking about potential criminal liabilities, life in jail for providing an abortion,” said Bhavik Kumar, a Southeast Texas physician who provided abortion care in limited cases until late June, when the Dobbs decision was handed down and his clinic ceased offering the procedure. The shifting legal landscape in Texas, which had the nation’s severest abortion restrictions prior to the U.S. Supreme Court ruling, has left Kumar worrying about what he can and cannot say and do and with “very little energy to actually be able to fully help people.” Kumar is on the board of the New York-based Physicians for Reproductive Health.

Tony Ogburn, a doctor with DHR Health in Edinburg, Texas, recently experienced the ban’s chilling effect when his patient undergoing a miscarriage risked a major hemorrhage, Newsweek reported. She delivered a stillborn baby on her own, allowing him to avoid the potential legal liability of performing an emergency abortion. An abortion is only permitted in Texas to save the life of the mother or to prevent “substantial impairment of bodily function.”

The Texas Medical Association, which opposes the ban, said in an email to Capital & Main, “TEXPAC — TMA’s political action committee — supports candidates for myriad reasons and various issues.” DHR Health did not respond to a request for comment.

On June 24, hours after Roe was overturned, Paxton issued an advisory that said that an 2021 abortion ban on the books would be triggered in 30 days and offered to “assist any local prosecutor who pursues criminal charges” against providers who could be charged with a felony for providing an illegal abortion. Texas is one of a dozen states where most abortions are currently banned, and about half the states in the country are expected to outlaw or limit the procedure.

In July, Paxton filed a lawsuit that succeeded in blocking the Biden administration from enforcing federal guidance that protected doctors if they need to terminate a pregnancy as part of emergency treatment. He claimed in the suit that the administration was attempting to “transform every emergency room in the country into a walk-in abortion clinic.” Just this year, Paxton has received at least $146,500 in contributions from medical associations, a hospital group and an insurer, according to OpenSecrets, a D.C.-based organization that tracks data on campaign finance.

With the overturning of Roe, the tension between those donations and some of the donors’ missions has become more pronounced. A statement from Texas Medical Association, issued after the Dobbs decision, condemns the Texas ban’s interference in the doctor-patient relationship. “TMA is unwavering in its stance against intrusions by government or other third parties that impede the patient-physician relationship, and any criminalization of acceptable and appropriate medical practices that may jeopardize that relationship or patients’ safety.” The TMA filed an amicus brief at the U.S. Supreme Court in an unsuccessful effort to block the enactment of Senate Bill 8, a law signed by Gov. Greg Abbott last year that prohibited an abortion as early as six weeks. The TMA has donated $297,000 to politicians that backed trigger laws in the state since 2005, according to a Business Insider investigation.

Paxton has sought to curtail abortion rights going as far back as 2003 when, as a state legislator, he voted to require that doctors inform patients that abortions might lead to breast cancer, even though cancer researchers say no such link exists.

Ghazaleh Moayedi is a Texas OB-GYN who has been an outspoken advocate for abortion rights. She recently joined abortion rights groups in a lawsuit against Paxton and other elected officials intended to forestall potential prosecution by state officials for helping Texans gain access to legal abortions in other states.

She has been troubled by medical associations’ support for federal and state lawmakers opposed to abortion rights. In May, she criticized their support for lawmakers who oppose abortion. “Why does ACOG [the American College of Gynecologists] do it? For that matter, why does AMA [the American Medical Association] & TMA do it?,” she tweeted after a colleague noted that ACOG had contributed to Republican lawmakers in Congress who voted in 2021 against the Women’s Health Protection Act, which would have prohibited restrictions on abortion services. Moayedi declined to be interviewed by Capital & Main.

Along with the AMA, ACOG has denounced the overturning of Roe v. Wade and filed a friend of the court brief in opposition to Mississippi ban upon which the U.S. Supreme Court decision was based. But its agenda is broader than just abortion rights, according to an email from the the group. “There is indeed a tension to balancing the many policy priorities of a medical organization,” according to a statement ACOG provided to Capital & Main. “ACOG’s advocacy across party lines has helped pass several new laws that will improve the health and lives of clinicians and their patients.”

One of Paxton’s biggest contributors is the Republican Attorney Generals Association (RAGA), a campaign committee that bundles large corporate donations and with dark money from right-wing donors. More than $1.2 million of RAGA’s contributions in 2022 came from the health care industry, according to a Capital & Main analysis of IRS filings provided by True North Research. RAGA donated $250,000 to Paxton’s campaign in 2022.

RAGA is an important force in a number of other state attorney general races that involve anti-abortion candidates, including those in the presidential battlegrounds of Michigan, Wisconsin and Nevada where Matt DePerno, Eric Toney and Sigal Chattah, respectively, are all running against pro-choice candidates in November.

Each of these publicly traded companies donated more than $100,000 to RAGA. Centene, which operates in Texas, donated $350,000. Pfizer, which has also donated more than $20,000 directly to Paxton since 2006, according to OpenSecrets, makes Cytotec, a drug that induces abortions.

Paxton, who is also under indictment for federal securities fraud, is not alone among anti-abortion candidates and officeholders who have received campaign contributions from the medical industry. Across the country, close to 1,000 health care companies, insurers, clinics, care facilities, pharmacies, drug companies and medical associations have given more than $14 million to 444 state legislators and 13 governors responsible for enacting trigger laws since 2005, according to Business Insider.

Paxton is in a close race with Rochelle Garza, a former American Civil Liberties Union attorney, who had not received any direct contributions from the health care industry as of mid-July, according to OpenSecrets. Paxton “supports banning abortion in all cases at any stage of pregnancy without any exceptions,” said Caroline Duble, political director of Avow, a Texas pro-choice advocacy organization that is supporting Garza. “Only 11% of Texans support that extreme of an abortion ban. So he’s way out of step with the average Texan.”

(Jessica Goodheart is a senior reporter at Capital & Main. She has written for the Los Angeles Times, the L.A. Reader and UPI, among other publications. Prior to joining Capital & Main, she worked at the L.A. Alliance for a New Economy, where she served as research director, authoring numerous reports on labor, employment and economic issues. This article was featured in Capital and Main.)