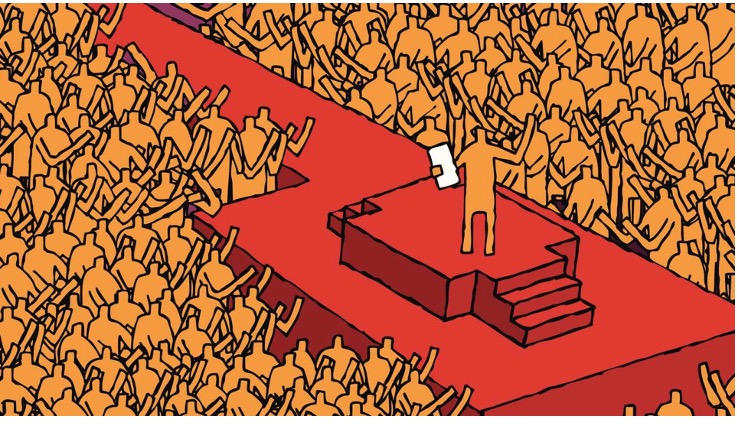 THE VIEW FROM HERE - In order to consolidate power, power needs to vanquish the rule of law.

Power hates restraint, which is why power seeks totalitarian forms of government, be it a monarchy based on Divine Right of Kings or the Dictatorship of the Proletariat.  For power mongers, democracy’s benefit is that it sounds as if people themselves are in charge, but that is essentially an illusion.

In a pure democracy where the majority vote determines everything, the whims of the majority can erase any and all rights.  America is not a pure democracy; in fact, America is not a democracy.  We are a Republic where the rule of law is supreme and voting is a minor part of the political process.   As a Federated Democratic Republic, the adjective “democratic,” however, is not superfluous.  In order for the government to secure individual inalienable rights including, but not limited to, Life, Liberty and Pursuit of Happiness, the citizens need a mechanism other than revolution to have significant input.  Thus, the US Constitution has elements of a representative democracy sprinkled throughout it.  The only place where the majority vote directly elects anyone is in the House of Representatives. Recognizing unreliable passions of the voters, the entire House is up for election every two years.

As Lord Acton noted in 1887, “Power tends to corrupt and absolute power corrupts absolutely.”  Thus, a Republic is under constant attack by power mongers. Corruption is not limited to the national level but exists everywhere for the elementary reason that all levels of government have power.  The corrupting nature of power shall forever plague human society.

The Role of A Republic in Thwarting Corruption

Declaration of Independence sets forth our society’s foundational myths, i.e. each person has inalienable rights including life liberty and pursuit of happiness and the purpose of government is to secure these individual rights by cooperative action.  The US Constitution’s preamble states that one of our basic objectives is to promote the general welfare.  Perhaps, the two most important phrases are “to secure these rights, governments are instituted among men” (Declaration) and one purpose of government is “to promote the general Welfare” (Preamble US Constitution.)  Individual rights cannot exist without the general welfare.

Individual Rights Within The Context of the General Welfare

This concept has been lost.  Millions of Americans see individual rights as evil since some people have more wealth than others while millions of other Americans see any restriction on their personal whims to be an intolerable denial of freedom.  Lurking behind this polarization, which has made America close to non-functional, lurks the lust for power.  Politicos justify  their behavior as noble since they cannot achieve their goals without power.  Their rationalization elevates their obtaining power, by hook or by crook, above any goal.

The Most Pernicious Evil Threatening the Nation is Group Rights

When the electorate focuses how well their group fares, voters tend to vote on the basis of group identification.  Factual analysis of complex factors does not stand a chance against the vitriolic rhetoric of fear and hate politics.  Sometimes, the group rights attack backfires as did Hillary’s calling White voters in the Rust Belt “Deplorables” just prior to the 2016 election.  Similarly, Trump’s racist attacks on Mexicans deters millions of Hispanics from considering the GOP.  Instead, each party caters to its extreme fringe, pushing either its anti-white or its anti-minority agenda.  Even Biden has forgotten that he was not elected for being Woke but for promising to be a Centrist.  But for their love of Group Rights, Nancy Pelosi and Donald Trump would not be the de facto leaders of the Dem and GOP parties.

More Integrity in the GOP Than in the Dem

One reason the GOP presently has tad more integrity than the Dem is the House’s January 6th Committee where Rep. Liz Cheney and Rep. Adam Kinzinger are prominent figures and the most credible witnesses are former members of Trump’s Administration. One may not, however, omit Sen. Mitch O’Connell’s abject betrayal of the Constitution with his manipulation of the votes on Supreme Court nominees which was as ignoble as Nancy Pelosi’s sabotage of both of Trump’s Senate impeachment trials.  Had either one shown an iota of integrity, the nation would not be in its current dire situation of an impending violent civil war.

Group Rights are prelude to war and politicos more than the average person believe that all is fair in love and war, especially when the politico can aggrandize her/his political power.  The significant increase in violence arises from the claims of group rights.  When one group is told that it has been constantly victimized and that its lives would be much better if Whites only paid them reparations, it’s a tiny step to self-help.  When the Dems villainize  young White males like Nicholas Sandmann whose sole crime was to smile to show he had no ill-will to an American Indian who was chanting in his face, there is no gainsaying that the Dems have an anti-White group rights agenda.

Group rights tells both minorities and Whites that they are not being treated fairly, while The Other gets preferential treatment.   In a world of lies, people stick with their group; the measure of what is good and acceptable becomes what benefits your group.  Anything that contradicts the leader’s narrative is a lie. When a nation has been polarized in order to advance the political power of a few politicos, facts become the enemy.  Just as Trump weaponized the passions of the Right with his big lie about his winning the Nov 2020 election, too may young minorities think that have the right to take whatever they wish from the wealthy on Melose Ave, Beverly Hills and Encino.