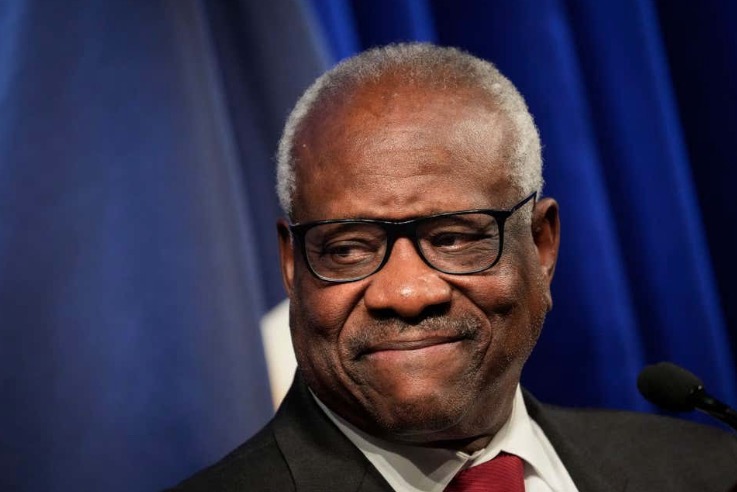 As of this morning, Roe v. Wade has officially been undone, but as hinted in a concurrent opinion written by Justice Clarance Thomas, more rights might be on the way out.

Yes, Justice Thomas, whose wife was trying to text and email her way to overturn the 2020 Presidential election, says the court should revisit cases concerning contraception access, same-sex marriage, and relationships.

“We should reconsider all of this Court’s substantive due process precedents, including Griswold, Lawrence, and Obergfell,” Thomas wrote.

[W]e have a duty to ‘correct the error’ established in those precedents,” he added. “After overruling these demonstrably erroneous decisions, the question would remain whether other constitutional provisions guarantee the myriad rights that our substantive due process cases have generated.”

Thomas was the only judge out of the nine who called to reconsider other precedents. The door to this was left open by Justice Samuel Alito’s assessment that abortion is not a protected right under the Due Process Clause of the Fourteenth Amendment.

The three potential cases that could be revised are the following:

As the dissenting opinions by Justices Stephen Breyer, Sonia Sotomayor, and Elena Kagan pointed out, “no one should be confident that this majority is done with its work.”

The constitutional right to abortion “does not stand alone,” the three justices wrote. “To the contrary, the Court has linked it for decades to other settled freedoms involving bodily integrity, familial relationships, and procreation.”

The irony here is that yesterday we celebrated the 50th anniversary of Title IX, allowing for women to have more opportunities in sports and school. Still, today we set back women’s reproductive choices. America operates at a one step forward, two steps back pace. It should be assumed that all previously established rights under the law are in the vision of this conservative-dominated court.

We are currently living in a state of “what do we lose next?” Is it Brown v. Board of Education (1954)? Will it be Loving v. Virginia (1967)? (although that would be interesting for Justice Thomas to want to overturn.) Decisions like today didn’t happen in a vacuum or even start with Sen. Mitch McConnell’s refusal to grant Merrick Garland a vote for the vacant Supreme Court seat.

Republican-led states are choosing to weaponize the gaze and heavy hand of the Supreme Court – trying every little ideological disagreement they have in smaller courts just for a day like this. This is a political and systematic long game Republicans have been playing to set the country back when Black, people of color, women, and the LBGTQ+ had fewer protections, rights, and claims to citizenship.

(Murjani Rawls is a Senior Writer, editor, photographer, and podcast producer with over eight years of success in journalism and editorial work. She is a staff writer for The Root, where this story was published.)