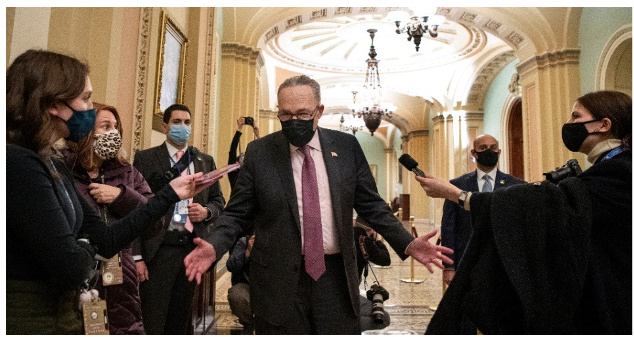 POLITICS--The decision by the Senate Democratic leadership and President Joe Biden—for no discernible reason—to tweak the emerging coronavirus relief bill in a way that would deny survival checks to around 12 million adults and five million children is drawing sustained blowback, with progressive House Democrats warning that the needless change could come with severe economic and political consequences.

"This is madness. People are struggling and we're fighting over how many people we want to EXCLUDE from the relief checks," Rep. Bonnie Watson Coleman (D-N.J.), vice chair at large of the Congressional Progressive Caucus (CPC), wrote in a fiery Twitter thread on Thursday. "What about the family with several kids who made $160k but lost their job in 2020? Or the person who made 80k pre-pandemic but lives in a high-cost-of-living state like NJ or NY? We're going to cut them out?"

"This is terrible politics and even worse policy. Why would we take needed relief away from 17 million Americans?"
—Rep. Ilhan Omar

"Stop nickel and diming the American people and pass the checks. We've been listening to this debate for a month. Enough," the New Jersey Democrat added. "While you're quibbling over who you want to exclude, people are suffering. SEND THE CHECKS."

On Wednesday, as Common Dreams reported, Biden and the Senate Democratic leadership signed off on a plan advanced by a faction of conservative Democrats that would accelerate the phase-out of $1,400 direct payments proposed under the emerging $1.9 trillion coronavirus relief package.

In an analysis released Wednesday, the non-partisan Institute on Taxation and Economic Policy (ITEP) estimated that 280 million people would receive a full or partial check under the new framework, compared to 297 million under the House structure.

"This is terrible politics and even worse policy," said Rep. Ilhan Omar (D-Minn.), the CPC whip. "Why would we take needed relief away from 17 million Americans? The era of austerity is over. We should be getting as much relief to as many people as possible."

In an appearance on MSNBC Thursday morning, Rep. Ro Khanna (D-Calif.) echoed the frustrations of his fellow CPC members, noting that the approximately $13 billion in savings produced by the change would represent just 0.05% of the $1.9 trillion package.

"Is it really worth saving 0.05% to have less checks go out?" Khanna asked. "It's a—overall—very, very good package, and this doesn't make much sense to me."

If adopted in the final package, the eligibility change could deny survival checks to millions of voters who received direct payments under President Donald Trump, potentially posing a serious political problem for Biden and the Democratic Party.

Pointing to ITEP's analysis, New York magazine's Eric Levitz wrote Wednesday that "whereas 91 percent of U.S. households would have received a check under the previous proposal, now only 86 percent will."

"Thanks to the whims of a couple of moderate lawmakers and the bizarre jetties of Senate procedure, Democrats are having to make a politically unpopular choice that will probably antagonize a modest but vocal number of voters."
—Jordan Weissmann, Slate

"That's not a huge difference. But these days, elections are often won in the margins," Levitz noted. "And Joe Biden’s Electoral College win in 2020 was contingent on the support of affluent, longtime Republicans who decided to cross the aisle. Now, a bunch of these voters will end up receiving less in direct cash assistance from Joe Biden than they did from Donald Trump."

Rep. Alexandria Ocasio-Cortez (D-N.Y.) raised that concern in a statement to the Washington Post on Wednesday, saying she doesn't "understand the political or economic wisdom in allowing Trump to give more people relief checks than a Democratic administration."

"It's a move that makes little-to-no political or economic sense, and targets an element of relief that is most tangibly felt by everyday people," Ocasio-Cortez later added on Twitter. "An own-goal."

While House progressives are furious at the last-minute eligibility tweak—which comes as the Senate is set to begin voting on its relief package—it's unclear whether they will use their considerable leverage in the narrowly Democratic House to fight the change when the Senate bill returns to the House. Democratic leaders in the House and Senate are racing to pass the sprawling legislation before March 14, when emergency unemployment benefits begin expiring for millions of people.

Slate's Jordan Weissmann wrote Wednesday that "politically, it very much does feel like Democrats are cutting off their nose to spite their face here, given that they made a new round of relief checks a centerpiece of the Georgia runoff campaigns that won them the Senate."

"The problem is essentially that, because the check amounts phase down so quickly, the payments now effectively create an insanely punitive marginal tax rate on a very narrow band of Americans," Weissmann explained, citing policy expert Ben Ritz. "A single taxpayer who earned $80,000 last year is going to be hit with a 70 percent tax on their last $5,000 of income, which means some people are going to realize they were working extra hours for basically nothing."

"In short, thanks to the whims of a couple of moderate lawmakers and the bizarre jetties of Senate procedure," Weissmann added, "Democrats are having to make a politically unpopular choice that will probably antagonize a modest but vocal number of voters without saving a substantial amount of money that could be put to better use. The World's Greatest Deliberative Body is at it again."

(Jake Johnson writes for CommonDreams.org … where this piece was first posted.)