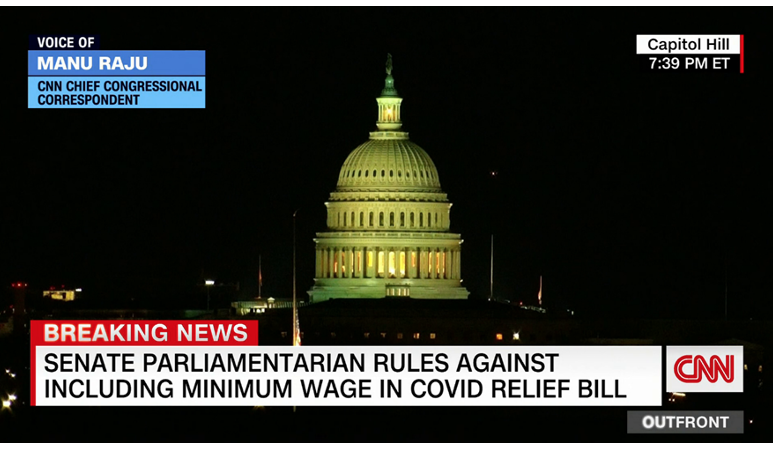 NATION WATCH--There’s a strange thing happening. Take the course the last day or two. The Democrats caved on the minimum wage. Then Biden announced an airstrike on Syria. And then Jen Psaki, the White House Press Secretary, took to the stage to defend “detainment centers.”

That wasn’t the strange thing. It’s how people, many of them, reacted. They defended the Democrats. They made excuse after excuse. Apologia after apologia. My friends, let me make a harsh point — and you can decide if it’s unfair.

Stop making excuses for the Democrats. It’s just a way to avoid a bitter, ugly, but all too visible reality.

The Democrats are terrible at politics. And that ugly truth has to be faced — or else this disastrous first month will just go on.

Now, before you freak out at me, let’s discuss this a bit.

Why did the Dems cave on the minimum wage? What happened was that a figure who’s basically a referee called the “Senate Parliamentarian” decided they couldn’t address that issue now. And yet they still had the power to overrule this. If they had, it would’ve forced a vote 60 or more to, in turn, block that. I know that’s a bit byzantine, but just see the point. The Democrats had the power to get this done. And they didn’t use it.

Now, already, I see you making excuses. “But what about Manchin and Sinema!” you cry. What about them?

Here’s the excuse you’re really making. The Democrats are not a political party that’s one of the most powerful organizations on planet earth. They don’t have the power to enforce party discipline among their members. They have no real force at all, as an organization, an institution, a party. That’s completely false.

The Democrats are one of the most powerful institutions on this planet. They have pockets so deep they’re richer than entire countries. They are connected to the hilt to the world’s most powerful people and organizations, whether corporations or banks or funds. They have incredible amounts of power. Nobody wants to cross them. That is why almost nobody, except maybe Bernie, is brave enough to run as an independent.

The Democrats have copious power to enforce party discipline. They just don’t use it. Big difference. What kind of power? Withholding fundraising. Telling all those big donors not to give. Closing the party Rolodex. Then there’s the political punishments — being denied committee seats and seniority and rank and privileges. Every party can enforce discipline. The Democrats choose not to do it. Imagine the terror it’d strike into the average politician to hear that the donors are being told to close the checkbooks and the super PACS aren’t going to raise money for them anymore. They’d freak out in terror. Their careers would be over.

Nobody wants to cross their party. Except the obstructionists in the Dems. But that’s not because the Dems don’t have power, it’s because they don’t use it. Except, maybe to sideline “the Squad.” See the difference? The Dems go out there and recruit candidates. They back them with money and power to absurd degrees. The idea that they can’t break candidates, too, is flatly wrong.

It’s true that Sinema and Manchin are grandstanding. They’re doing it for political gain. Don’t you think people in Arizona and West Virginia want higher minimum wages, too? Of course they do. The obstruction is there so that Manchin and Sinema can extort seats and money and privileges from the Dems. But the Dems let them do it.

This is terrible, terrible politics. It is vivid proof of a very simple fact.

The Dems are bad at politics.

The Democrats have created an impression that many — many of you, gentle readers — buy. They are powerless victims. And so when they don’t use their power, naturally, too many tend to make excuses for them. “They couldn’t have done anything!” “It’s not their fault!”

Wait. This is their grown up adult fulltime job. This is what, let me remind you, we pay them large amounts of money for.

To get stuff done. They don’t seem capable of doing that, at least to the degree they promise, or the degree the moment demands — and then they turn around and peddle the myth that they’re powerless right back to us. But the Dems are not powerless. They are, again, one of the most powerful institutions on the planet. They are incompetent or they are not really in this fight — take your pick.

Let me give you an example. When the Dems want to get stuff done, they do. Only it’s the wrong stuff.

Joe Biden had no problem whatsoever ordering an airstrike in Syria. Why is it that we can bomb some poor village — for show, no less, to prove how macho America is — but people can’t have a higher minimum wage?

When you make excuses for all this, you’re employing a double standard. You’re saying the Dems are powerless — but only when it satisfies you. They can’t be powerless and also be dropping bombs at the first opportunity, can they? And when you employ a double standard, my friend, you are making a fool of yourself.

This warping of the mind is almost as dangerous as Trumpism. Who in their right mind goes out and says, “Oh, putting kids in camps is good, all of sudden, because Joe Biden’s doing it!” Nobody does. It’s a thing you don’t say if you’re thinking clearly, well, or even just at all.

This is worse than a double standard. It’s believing in a Big Lie. There is no such thing as a “good” concentration camp. A “good” bomb or missile, unless, I don’t know, the Nazis are on the way. These are inherently violent and destructive things. They are fascist. I know you might not like to hear that, but go ahead and tell me: is it really not fascist if empathetic and kind Joe Biden is the one putting kids in camps, instead of mean and nasty Trump? Or isn’t that just believing in a Big Lie? Maybe an even bigger one?

This, too, is terrible politics.

Because the Dems are going to lose anyone to the left of with camps and missiles and fascism and violence, just with a nicer face. And that’s everyone under the age of 40 or so, every minority, and every progressive. The Democrats are going to splinter their already fragile coalition by doing this stupid, nonsensical, indefensible BS.

And you shouldn’t defend it, precisely because it is indefensible.

Stop making excuses for the Dems. You are only avoiding seeing the point, the truth, the reality. I get it. It’s a painful one to admit.

The Dems are terrible at politics. Really, really bad. They are making amateur league mistake after mistake. They are either incompetent, inept, weak, or they’re acting in bad faith, take your pick, as if this is what they really want. And all of that means that politically, they are blowing it, and they are blowing it badly. They will lose power swiftly, as people turn away disillusioned, disgusted, and America will be back to square one.

Think about it. The Democrats can: put kids in camps, drop bombs on villages, and defend all that publicly and furiously, but not pass a minimum wage, punish their obstructionists, and offer clear moral leadership. Come on. Give me a break. You shouldn’t defend that. You should see it for what it is. Weakness, incompetence, or bad faith, take your pick.

The way to reform the Dems isn’t to be nice to them. That’s not your job as a citizen, being nice to incompetents, or worse, to bad-faith sell-outs. They are not children. They are grown-ass adults with all the money and power in the world. Your job as a citizen is to hold them accountable.

You can and should be furious about a party that can put kids back in concentration camps but won’t give you a raise. You shouldn’t shrug and recite the myth they peddle, that they’re powerless, and it’s not their fault. They’re not powerless. It is their fault. They have all the power anyone can have in America, and they are not using it — except in all the wrong ways so far.

Don’t make excuses for the Democrats. Hold their feet to the fire. There are two short years in which America can be reformed. And if it isn’t — guess who’s back in power? Did I just make you shudder? Good. Then you see the stakes.