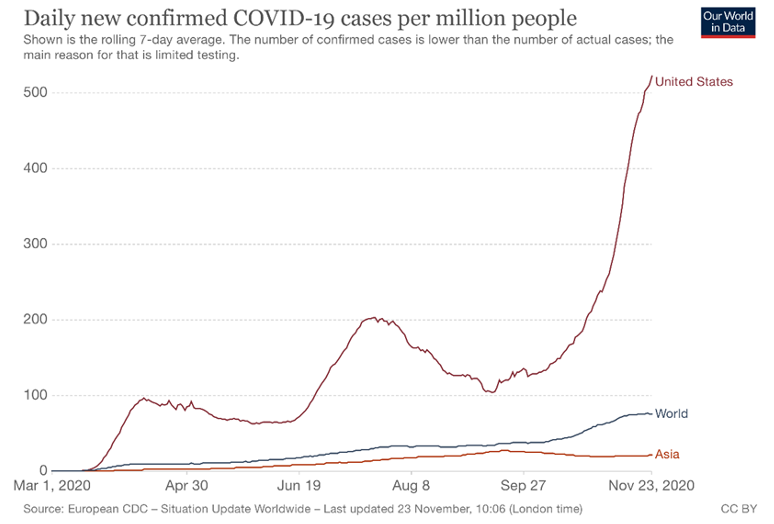 GUEST WORDS--Covid in America is so bad that more than 250,000 people are dead.

So bad that 9 of the world’s top 10 hotspots are all American states. You’d think that given all that, Americans might have chosen to stay home for Thanksgiving — but that doesn’t appear to be the case. Millions of Americans are already travelling to see their families, stay inside with them, mix with friends — which is literally the worst thing you could do during a pandemic that’s spun badly out of control. Meanwhile, a President who’s lost the plot is golfing and or trying to steal the election, instead of lifting a finger.

Is Thanksgiving about to be a hyper-spreader event?

And that is exactly what Thanksgiving promises to create — and then Christmas after it.

Imagine it. Millions of people travelling. Crammed into cars, buses, airplanes. Stuck in airports and train stations. Overheated, unventilated places. Boom. There’s rarely been a more perfect way for a pandemic to spread, at least in the modern world. How many of those are likely to become super spreader events all of their own?

Maybe this bus route becomes its own mini super spreader event. Maybe that airline flight does. Maybe that whole airport does. Perhaps that bus station does. Maybe this home goes on to infect a whole block, which infects a town. Perhaps that mall or that cafe or that grocery store becomes one. Maybe combinations thereof reinforce each other. People on this bus route infect each other, who all go home and infect their families, who go to the mall for Black Friday, and infect their whole region. Boom. Multiply that five, ten, fifty times over, and you’ve got a hyper-spreader event.

It’s not too hard to see how this is likely to happen, and I’m not exactly being paranoid. Epidemiologists and scientists of all kinds in fact are predicting something just like this. Only there’s not really a word for what happens when half a country pretends like a pandemic doesn’t exist, and carries on with life as usual — during the holidays. It feels to me like Thanskgiving in America is going to be something even beyond a super-spreader event.

To understand, you’ve got to think about the peculiar pattern of Covid in America. It has a grim, weird, ominous shape to it — something profoundly unnatural, at least in the modern world. America didn’t have “waves” of Covid — as in patterns of disease that rose, crested, and fell. Other countries had those — successful ones. Covid in America never fell. So Covid followed this strange humpbacked, stair-stepped shape. Three exponential rises, three plateaus. What does that signify, portend?

That shape strikes us as so unnatural in the modern world because we are used to seeing waves. Waves are what we should see, because we have tools and understandings that people in previous eras didn’t have. For many diseases, we have vaccines, and where we don’t have vaccines, we understand how contagion spreads, and so we know how to — very effectively — limit disease, too. The “wave” is something that strikes us natural because it reflects a scientific understanding of how to fight disease.

But we didn’t see waves in America for a very simple reason. Nobody much really fought Covid. I know that strikes Americans as harsh, but to the rest of the world, it’s eminently true. Trump denied it, minimized, told people to drink bleach, and then golfed. Meanwhile, a huge portion of America followed his lead, and pretended Covid didn’t exist.

Contrast that with, say, New Zealand — where Jacinda Ardern called upon “team New Zealand” to unite and not just fight the virus, but wipe it out. Yes, it’s true that there are many brave and noble scientists and healthcare workers. But they are very, very much in the minority. As a society, America did as little as possible about Covid. The President denied it, and society as a whole was revealed as incapable of cooperating to stop it.

The idea of wiping out the virus — which is what successful countries did — wasn’t even raised as a serious possibility in America.

So instead of seeing “waves” of disease, the shape of Covid in America ended up being the weird hump-backed chart that you and I know. It’s eminently incorrect to think of this as three “waves.” Waves fall. What they really are are three tsunamis — each piled atop the last. Covid hit America like a series of floods — which never receded. The next simply piled atop the last, until, by now, the entire country’s waist-deep in disease.

You need to understand that to really grasp what comes next if — as is likely — Thanksgiving is a hyper-spreader event. Why? Because America’s already starting from an incredibly high base. It’s not as if the daily case load and death rate is minimal. It’s shockingly high — somewhere around 200,000 cases, and 2,000 deaths. We’re dealing with exponential math here. Starting from a high base means the chances of explosions and chain reactions are that much higher.

Let me put that in more concrete terms. How bad could Thanksgiving being a hyper-spreader event really end up being? We have to look backwards to look forwards — and understand how exponential growth really works.

What we’re doing here is trying to find the “exponent” in exponential growth. And what it reveals is not good. That means that in America, Covid’s growth is accelerating. The growth rate itself is growing. It’s getting faster and faster. Cases a little more than doubled during the first hump to the second one, and then they almost tripled from the second hump to the third one.

Now we can apply that simple math to think about how bad things could get if Thanksgiving is a hyper-spreader event. Let’s just use those numbers to create three scenarios. In the optimistic one, things stay as they are — that’s about the best we can hope for with millions travelling in the middle of a pandemic.

In the next one, Covid’s growth rate hits 2.33 times, which is what it did from the first to the second hump, the last time it went exponential. Except this time what’s multiplying by 2.33 times is the higher base of 200,000 cases per day. That means that America hits about 450,000 cases per day, by about Christmas.

And in the last scenario, the growth factor is 2.85 times, which is what it was from the second to the third hump. That means that American hits about 570,000 cases per day, by about Christmas.

Those are truly incredible, breathtaking numbers. I have a hard time processing them myself — but math doesn’t lie, especially about things which follow simple rules of growth, like pandemics. How bad are those numbers? Really, really bad.

So bad that a final scenario that’s really grim and bizarre emerges.

Taking the average of the two scenarios where there’s a super spreader Thanksgiving, the case rate jumps to 500,000 per day, and the graph of Covid in America hits a new peak.

But this peak is different. It means that most of the country gets infected shortly into the new year. Before there’s a vaccine. 500,000 cases a day? Give that three months, at exponential growth, and that’s way, way beyond America’s entire population. How many deaths is that? Easily another 500,000. This is the darkest scenario of all: the country gets infected before the vaccine’s even available. See how gruesome and bizarre that is?

So will America hit it? The good news is: probably not. There are enough sane Americans left to stop that ultimate peak of total destruction from being hit. But that’s the lowest possible bar of all, really.

America’s not going to escape, probably, without sending Covid to a newer and higher peak altogether. How high that peak is is anyone’s guess — with the following grim conditions. It’s going to be north of 200K cases and 2,000 deaths per day, likely somewhere between double and triple that number. Let me put that in perspective.

That means that while maybe the whole country won’t get infected before there’s a vaccine, much of it — states, cities, towns, hamlets — will. Especially those places that still — amazingly — don’t “believe” Covid exists. Thanksgiving is America infecting itself with Covid at the highest rate of all, just before a vaccine is finally here.

If that sounds dystopian to you — a country furiously infecting itself with a deadly disease just before a vaccine is available — that’s because it is. Welcome to America, my friend. This is what it means to be a failing state in 2020. A place where there’s no national plan for a pandemic because the President’s golfing, where people can’t cooperate to fight it because enough of them believe freedom is the right to spread it, where enough of them are foolish enough to travel while the pandemic’s at deadly peak, sending it to a newer, higher one, just before a vaccine is finally finished.

A country infecting itself with a lethal pandemic en masse right before a vaccine’s available is one of the strangest, most gruesome, most self-destructive things I think I’ve ever seen. After all, what a sensible person would do is…wait.

(Umair Haque writes for E&OC … where this perspective was first posted.)