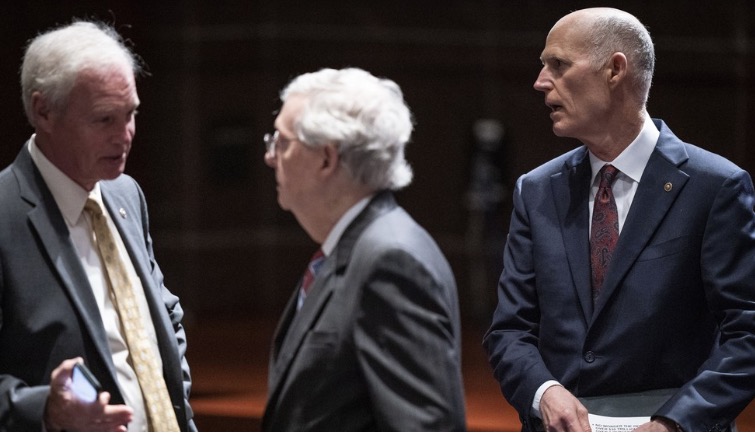 POLITICAL WATCH - It’s The Ronald Reagan Memorial Competition: which Republican can make the rich richer and the poor poorer the fastest?

Johnson wants Congress to vote every year whether or not to continue funding both Social Security and Medicare, while Scott says it should only be every five years.

On top of that, in a true tribute to Saint Ronny, they’re competing for how to most aggressively raise income taxes on working-class people, and how quickly.

(You may remember Rick Scott as the guy who ran the company convicted of the largest Medicare fraud in the history of America, who then took his money and ran for Governor of Florida, where he prevented the state from expanding Medicaid for low-income Floridians.)

Most low-income working people in America actually pay a higher percentage of their income as taxes than do many billionaires and multi-multi-millionaires.

Working people pay Social Security taxes, Medicare taxes, property taxes, sales taxes, and other taxes in the form of fees for everything from a driver’s license to road tolls to annual car inspections.

Billionaires, on the other hand, have bought politicians to write so many loopholes into the tax code that most — like Donald Trump — will go decades without paying a single penny in income taxes.

But that level of inequality isn’t enough for Senator Scott, who’s committed to out-neoliberaling Ronnie himself. He wants everybody in Romney’s “47 percent,” even people making $7.25 an hour or less, to subsidize billionaires by paying income taxes on their meager wages.

His logic is nuts. The simple reality is, if you want more Americans to pay income taxes, all you have to do is raise working people’s pay. This isn’t rocket science.

We saw it work out in a big way between 1933 and 1980, before Reagan’s war on labor, when unions helped wages — and income tax payments — steadily rise for working people. Those rising wages literally built the middle class, which peaked in 1980 and then began its long slide under Reaganomics.

In the early years of the Reagan administration, before his neoliberal “trickle down” and “supply side” policies started to really bite Americans, only 18 percent of Americans were so poor that their income didn’t qualify to be taxed.

As “Right to Work for Less” laws spread across America and Republicans on the Supreme Court made it harder for unions to function, however, more and more working people fell below the tax threshold. When Romney ran for president in 2012, it was 47 percent of working people who had fallen out of the middle class and were then so poor that they lived below the income tax threshold.

Today, just a decade later (and after the $2 trillion Trump tax cut), it takes two working adults to maintain the same lifestyle that one worker could provide in 1980. That’s why an estimated 61 percent of working Americans this year will make so little money that they’ll struggle to pay the rent and buy food, and their income won’t be subject to taxation.

But Rick Scott’s solution to this situation isn’t to raise the income of working-class people so they make enough to pay for food, rent, and qualify to pay income taxes.

Quite to the contrary, he’s suggesting that low-income people should be hit with their very own special income tax — in addition to the dozens of other taxes they’re already paying — so multimillionaires and billionaires like him and his friends can see their own taxes go down a tiny bit.

“All Americans should pay some income tax to have skin in the game,” Scott says in his 11-point plan, “even if a small amount. Currently over half of Americans pay no income tax.”

But for Ron Johnson, even that’s not quite enough of a club to beat working-class Americans over the head, particularly those who are retired and no longer working. He’s targeting the older folks, in fact, for his punishment this week.

He wants to open the Social Security and Medicare trust funds to an annual vote by Congress by moving those programs from the “mandatory spending” category to the easily changed or deleted “discretionary spending.”

“Defense spending has always been discretionary,” Johnson said on a recent radio show. “VA spending is discretionary. What’s mandatory are things like Social Security and Medicare. If you qualify for the entitlement you just get it no matter what the cost.”

While Scott’s plan would have Congress both impose an income tax on the lowest-wage workers in America and require Congress to vote every 5 years on whether Social Security and Medicare should even continue to exist, Johnson is in more of a hurry and wants to move that vote up to every single year.

“What we ought to be doing is we ought to turn everything into discretionary spending so that it’s all evaluated so that we can fix problems or fix programs that are broken that are going to be going bankrupt,” Johnson said, echoing a Republican refrain dating back to the 1930s that “any day now” Social Security is going down the drain so we should just hand it over to Wall Street now.

Democrats should flip the script — essentially, pull a Reagan on the GOP — with a plan of their own, only this one with some real middle-class tax cuts.

For example, Democrats could propose ending the income taxes on Social Security, unemployment benefits, and income from tips.

Before Reagan, the first two were totally tax-free and the IRS had never pursued tips until he directed the agency to do so in 1988.

After all, the money you receive when you retire or become disabled and begin to draw Social Security is money that you already paid in, in large part, throughout your working life.

When Congress passed legislation in the 1930s enacting unemployment insurance, they established a trust funded by employees, using money their employers could have paid them in other benefits.

Most workers never use this fund, but those who do are simply receiving what they already, indirectly, have paid into a system to create a safety net that will catch people so they don’t fall too hard or too far when they lose their jobs.

Because this money was usually deducted from people’s income before wages were calculated, unemployment benefits were also not taxable and not even reported to the IRS from 1935 until Reagan began taxing them.

Finally, people who work in jobs where they receive tips rarely have their own accounting system to daily keep track of those tips and report them to the IRS, and, besides that, tips are actually gratuities rather than income and are wildly variable.

They shouldn’t be subject to income tax. And weren’t from the beginning of the income tax in 1918 until just after the election of 1980.

Back in 1981, however, Reagan passed the biggest tax cut for billionaires and giant corporations in the then-history of the world, lowering the top rate from around 74% to around 28% and shoveling, in today’s money, over fifty trillion dollars from working class people up to the top 1% in the years since.

The result was an explosion in the budget deficit the following year, so Reagan used that excuse to enact the largest tax increase since World War II. Being a Republican, he put it almost entirely on the shoulders of working people, unemployed people, and those receiving Social Security.

Reagan and his Republicans made Social Security income taxable for the first time in American history. It still is taxed, crippling people trying to live on that meager fare.

Tips, Reagan and his GOP buddies figured, were actually part of wages so they changed IRS rules to force employers to count and report tips. As The New York Times reported in 1988:

“According to the Reagan Administration, which proposed the change, the expanded [tips] tax would raise $200 million this year and $1.6 billion over five years.”

And people on unemployment, Reagan decided, should also pay income tax on the money they received out of the unemployment trust funds that they, themselves, had paid into throughout their working lives via their employers.

When Reagan arrived at the White House there was a 0% tax bracket for Americans making under the equivalent, in today’s dollars, of around $8,500 a year. Those folks paid absolutely nothing in income taxes.

Finally, instead of indexing Social Security payments to one of the cost of living indexeslike CPI-E that reflects the actual costs of older or disabled people, Reagan stuck seniors with a COLA irrelevant to retired people.

As an added slap in the face, he increased the Social Security tax paid by working people making under $147,000. (The morbidly rich, to this day, don’t pay a penny after the FICA tax on their first $147k in income.)

To add insult to injury, Reagan also raised the retirement age from 65 to 67, although to avoid political blow-back back in the 1980s he made sure it only applied to people born after 1960. Ironically, it phases into full effect this decade.

Reagan is gone, but his attacks on working class people roll on. Now they’re being carried on by Rick Scott, Ron Johnson, and all the rest of the multimillionaire Republican senators.