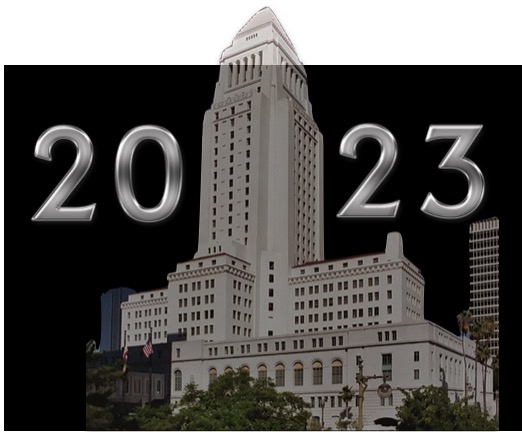 Under the city's Charter amendments of 1999, a system was created to bring into existence the neighborhood council system. What would that system be? This was largely left up to individual neighborhoods, who were invited to develop their own organizations. Most of us did. But the Charter also called for a new city government agency and a new city commission to keep things under some control. The City Council also chose, at the time, to create a new City Council subcommittee to oversee the entire neighborhood council system and the new city agencies.

Without going into the details, the mayor appoints groups of people as commissioners who have policy authority over specific agencies such as the Port of Los Angeles, the Department of Water and Power, and the Airport. These three agencies have their own sources of income, and appointment to the Harbor Commission, for example, is considered a plum assignment.

Then there are other commissions, of which the Board of Neighborhood Commissioners (BONC) is created to oversee the neighborhood councils. Under the Charter language:

Sec. 902. Board of Neighborhood Commissioners.

Notice one important thing here. There are currently 99 neighborhood councils which include just under two thousand elected board members who represent the nearly four million residents of the city of Los Angeles. We board members have essentially no say in who gets appointed to the BONC. We have on occasion done a little lobbying in order to prevent a particularly bad candidate from being appointed, but historically, it's been a big surprise as to who the mayor nominates to an empty BONC seat. On at least one occasion, the BONC appointment for our harbor area district was a political appointee who had never been to a BONC meeting and showed essentially no knowledge of the neighborhood council system when questioned.

One other point. As of now, we have little knowledge as to whether the new mayor has any interest in the neighborhood council system. Rumors suggest that she doesn't really, but that's the nature of rumors. Neighborhood council members and organizations are scurrying to create communication paths to the mayor and to her assistants. Usually, the mayoral assistants who deal with neighborhood council matters are, to use Tom Wolfe's term, flak catchers -- that is to say, their job is to take the phone calls and meetings so the mayor and the Deputy Mayors won't be bothered in saying NO to our pleas.

At the moment, we in the system have no way of knowing who the next round of BONC commissioners will be, or what mischief they will be up to.

The reason these appointments are important is not that they will do some good. City government has rarely done anything to make my life easier as a neighborhood council board member. But they can and do come up with suggestions that impinge on my rights or even attempt to impose work requirements on me. For example, the city imposes "training" in land use and civility on me, even though they are unnecessary and basically a waste of time. Each time we get a new City Council, it seems that somebody wants to cure some perceived problem by creating a new rule and new training requirements. These proposed requirements are ordinarily of the "John was rude to me" variety. That is --

"John was rude to me at the neighborhood council meeting so we have to create a comprehensive collection of ordinances and rules that limit every element of communication and discourse and also include ways that I can get John kicked off of my neighborhood council board."

And, may I add, I'm not even kidding about this. The above paragraph describes almost exactly what has been proposed at BONC meetings by DONE staff, and some of which has been passed.

Perhaps things will be different since the Nury Martinez scandal, at least in terms of acceptable language. When one City Council member in his final speech invites the public to fuck themselves, and when members of the public use the same language in their public comment, it's going to be hard for the BONC and DONE to enforce their Victorian views of acceptable language on neighborhood council board members or visitors.

What can be done about DONE?

Meanwhile, the Department of Neighborhood Empowerment continues to exist and to sort-of-function in its own semi-competent way. It has a General Manager (Raquel Beltran) who is smart and competent but tends towards the authoritarian frame of mind. In this, she is the diametric opposite of earlier General Managers such as Greg Nelson, who felt that the purpose of DONE was to help neighborhood councils do what we want to do, not to tell us what we should want to do. She continues to support the idea of piling on additional new training requirements on our unpaid neighborhood council board members. The idea of negotiating with neighborhood councils over such demands seems to be entirely foreign to the current DONE staff.

Perhaps the new mayor can find Beltran a position in some other city agency where her corporate approach would be better suited. It's worth a thought.

A way to deal with DONE

Interestingly, the Charter commissioners considered DONE to be a less than permanent institution. They even provided for a way to remove it as an agency and transfer its duties to another city department:

The City Council, with the consent of the Mayor, can fold DONE into some other department. The obvious choice would be the City Clerk because the Clerk has already taken over running neighborhood council elections and paying neighborhood council bills. But it could be just about any other department. My original choice was the Department of Cultural Affairs, which could use the funding and exists to serve the public interest.

At one time, the city actually was considering moving DONE into some other department to save money. (The city was badly strapped at the time.) Back then, neighborhood councils banded together and defended DONE's existence and managed to kill off the proposal. This time around, the suggestion may come from neighborhood councils themselves, particularly if DONE continues to have its current attitude problem. We are seeing more and more blowback from neighborhood council participants -- and these are people who have been in the system for a long time and are generally considered to be cool heads -- and who have been trying to communicate to DONE that they are going way overboard in their regulatory proposals and need to cool things down. We'll see whether the new Mayor and new City Council show any interest in reforming this little part of the system. I think it's safe to say that all we want is a little respect.