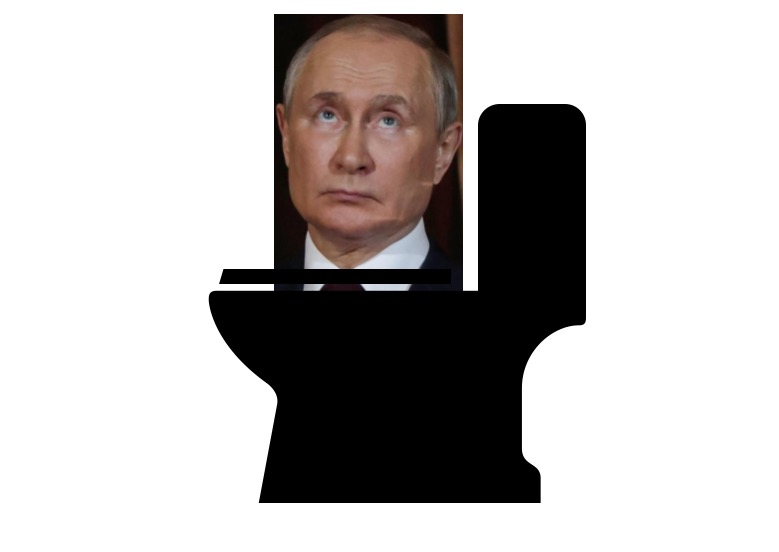 GELFAND’S WORLD - In considering the points I will make below, I find that the inevitable conclusion is that the United States and the European countries need to maintain the sanctions on Russia for at least the next 3 years,

no matter what battlefield concessions the Russians may offer with regard to the Ukraine conflict. The reason is that the object of the western effort can no longer be just bringing the conflict to an end, but making sure that Russia no longer represents the military dictatorship that is able to blackmail the world with the threat of using nuclear weapons.

Curiously, I also find Donald Trump's latest pronouncement to be relevant to this discussion.

Here's one question to start: Did Vladimir Putin fall down the stairs and bust his ass, suffering a bowel failure (the official press rendition was "involuntary defecation") in the process? The answer is that we don't know, because Russia is enough of a closed society that rumors come and go, but legitimate information is often the last thing we get from them. Loss of freedom of the press is one of the first defining characteristics of dictatorships, as Timothy Snyder has pointed out so deftly.

The reference to Putin's fall is made just to connect our discussion to the characteristics of dictatorships and to the question of how the Russian dictatorship might be nudged or squeezed towards becoming a free country. The "free country" part will be useful to the Russian people, but we should want it because it would be safer us too.

Dictatorships are characterized by their lack of certain features that modern democracies rely on to protect their own institutions, among these being freedom of the press, an independent and honorable court system, and free elections. The loss of any one of these endangers everything else.

So here we are, coming to the end of 2022, having observed the Russian war crimes and terrorism, and being unable to do enough because of the additional Russian terror tactic of pointedly mentioning their willingness to use nuclear weapons.

This has to stop if we are to avoid another era such as we endured in the last half of the 20th century, a time when nuclear war was a real possibility and a constant threat. We want that threat to diminish, and this requires that real safeguards exist against a Russian dictator ever again waging war on one of our allies under the threat of nuclear weapons. There doesn't seem to be any way of accomplishing this goal short of abolition of the current dictatorship and the guarantee of a representative government.

What must the Russians do to make themselves into a modern, western-style democracy? Here are a couple of clues:

The first principle is that no single person should have absolute power. There have to be systems for questioning the actions of rulers and of thwarting those actions when it is appropriate.

The second major principle is that succession to power is not hereditary or left to a small group. The choice belongs to the people as a whole.

And finally, even though it shouldn't have to be mentioned, is that a ruler who has been lawfully elected does not get to abolish the process whereby the people choose his own successor. There are plenty of historical examples where a popularly chosen ruler abolished democracy by making himself ruler for life.

An aside that isn't that much of an aside

We have Donald Trump's latest pronouncement over his loss of the 2020 election:

"A massive fraud of this type and magnitude allows for the termination of all rules, regulations, and articles, even those found in the Constitution."

Let me try to translate that into normal English: "I (Donald Trump) can't imagine how a majority of people would vote against me, so therefore I must have really won, and it took a massive conspiracy to make my votes disappear and make votes appear for Joe Biden. And since that is the case, we have to ignore the Constitution so I can take my rightful place as president. And when I am president again, I won't be bound by the Constitution."

I don't think we have to belabor the Trump comment. Is there any other American who wishes to defend that statement? If so, make yourself known so we don't elect you to anything, ever again. Even Mike Pence, as loathsome as many of his views are, refused to go that low, even when Donald Trump asked him to do so.

Democracies are messy, people squabble, and sometimes governments turn over fairly rapidly, but democracies make it hard for any one person to gain and keep the absolute power that is characteristic of dictatorships.

Dictatorships are fundamentally dangerous to health and life

Citizens of dictatorships are always in a situation where they can be shot or blown up in another man's war, and their country can be damaged or devastated. And they have nothing to say about their country entering such conflicts.

And as I have pointed out in these pages back when the Ukraine war was new, a country which possesses nuclear weapons has to be particularly wary about their use. Instead, the Russian Federation has been threatening the use of nuclear weapons in a disagreement with a European country that it has no legal rights over.

We cannot allow this to be the condition under which we live for the next century. For that reason, we -- the United States and the European and British countries -- need to keep the sanctions against Russia in place not just until the Ukraine War is ended, but until the Russian people enact reforms that put workable checks and balances over government in place. The Russian people will see the continuation of sanctions as being punished by the west for their inability or unwillingness to oust the dictator and end the dictatorship. To some extent that would be true, but it is a necessary action if we wish to regain some sense of security over our own lives.

The point is to tell the rest of the world that if you threaten the use of nuclear weapons in a war of imperial expansion, your country will be severely damaged by the ensuing response from everyone else.

What does the Constitution really say about a disputed election?

Coming back to the Trump pronouncement: In brief, even if there were some evidence of vote rigging, would the Constitution require an electoral redo?

Let me offer a position that some of you may find to be a bit argumentative, but is, I think, closer to historical truth than what we're hearing from the holier-than-thou spokesmen on either side.

One intention built into the Constitution is that we make decisions and get on with things. We count votes and the numbers get reported to state governments and passed along to the congress.  That's what happened on January 6 when the congress met to ratify the reports from the individual states.

And the Constitution does not care whether the Electoral Votes from any one state were the result of a crooked election. What the Constitution cares about is that the individual states provide their Electoral Votes and that the congress counts those votes and acts accordingly. In practice, I have to hope that the vote counters in Iowa and Illinois and Nevada count votes honestly, and it is important that in modern day America that the voting and vote counting systems are inspected constantly and carefully by representatives of both parties.

fact, it is legitimate to consider elections in advance by enacting and enforcing laws such as the Voting Rights Act.

I think that the system in most states is pretty good and basically accurate. But the Constitution by itself simply provides for a system whereby states report their results. It does not provide for the result to be determined by a presidential temper tantrum.

Note that there is nothing I've said here which would justify a state legislature from ignoring the votes and determining the outcome of an election by itself. Strangely enough, this is the doctrine that some right wingers are currently pushing and which will be heard by the Supreme Court. Such a doctrine would be just as dictatorial as the soviet system in which the national ruler is selected by the communist party bosses.

There is one other point which we might consider. The Constitution (in Article IV) guarantees every state a republican form of government. This is understood to mean that no state is allowed to form a monarchy and thereby endanger its surrounding states. It is also, of course, a protection for the citizens of each such state. The idea of the guarantee clause, as it is known, seems to imply that there be elections which in turn implies that there be free and honest elections.

But all of this having been said, the Constitution requires that the nation come to a conclusion about who is to be the next president and then get on with it. The Constitutional system seems to involve making changes in time for the next election rather than constantly redeciding the last election.

Shorter version: Trump is not only wrong, his thought process comes across as ignorant and bordering on being delusional.