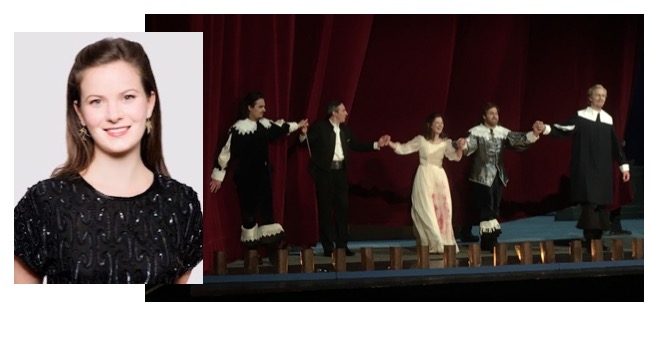 GELFAND’S WORLD - A hard piece to write, because it ultimately comes down to excitement over a wonderful production with only two performances remaining.

But it's opera, or even grand opera, a term which puts a lot of people off because of Bugs Bunny cartoons and the like.

Simply put, the new production of Lucia di Lammermoor is wonderfully well done, although it does things that I would ordinarily hate. But in this case, the things it does are wrapped up in a way that is simultaneously entertaining and also rises to the level of art.

The plot involves a girl who is in love with someone who is from an enemy family. It's kind of like adjacent street gangs, but in this case is set in Scotland in the 1600s. Like Romeo and Juliet and other stories, the young lovers die by their own hands. The story, from a book by Sir Walter Scott, was transferred by Gaetano Donizetti to Italian opera. That means it has lots of terrific songs, even if we are supposed to call them arias. The other thing about real opera is that it has available the best voices and, when it is called for, everything that an entire orchestra can bring.

The question for me when it comes to dramatic productions is pretty simple. Did it work? By this, I mean, did it have a powerful emotional impact and maybe invoke unanswered questions and provoke deeper thought -- and did it make the hair on the back of your neck stand up? Were the audience reduced to tears, even as they jumped to their feet and gave the cast and orchestra a standing ovation? All these things happened at the Los Angeles Opera presentation of Lucia di Lammermoor.

The opera, originally set in a drafty old castle in the Scottish lowlands, was transferred to modern day America by stage director Simon Stone. Scenic designer Lizzie Clachan put together a set that includes a two story wooden house to replace the castle, and builds around it a weathered aggregation of shops (a liquor store, an all night pharmacy, a motel), a beaten down old drive-in movie screen, old cars without tires, and what looked to me like a water treatment plant.

Here is how the program described the production: "This staging treats Lucia di Lammermoor as a contemporary story, placing the action in a declining present-day town in America's Rust Belt and addressing societal issues familiar to modern audiences. The staging makes extensive use of video to provide close-up views and more than one perspective."

This understates the case. The additional perspectives add a lot to the experience. To me, the setting looked like it could have been a compressed view of the old San Fernando Valley, or one of the Central Valley towns like the one we saw in American Graffiti. I didn't see that bit about "addressing societal issues" other than that there are firearms and the use of cell phones where the original wording refers to daggers and letters.

Most people who have heard of this opera connect it with "the mad scene from Lucia di Lammermoor." We understand that Lucia, the main character, goes a little crazy in the last act before taking her own life. But the mad scene is really not all that mad, other than the fact that the soprano is singing about her life as she would want it to be, or imagine it to be, and she does it with a beautiful song and high notes to beat all high notes.

At a certain part, this popular opera, performed on this stage on this night, became a deeper kind of art. Perhaps it was the few minutes in which Lucia, still dressed as a petulant teenager, walks through the setting which will be her wedding in a few minutes. She is completely distanced emotionally from the real world, with its waiters blowing up balloons and guests dressed up for a party, and she is dreading every coming moment. This scene works in a way that most attempted drama doesn't, forcing us to confront our own demons while simultaneously being entertaining. She has to make choices, and none of them are going to work at all well for her, and she is trapped. And all of this embedded in Donizetti's finest music.

Here is the paradox: I've seen a number of classical operas staged with modern settings in the attempt to bring some sort of "relevance" to shows that did not require any such thing. (The composer took a story that appealed to him, heightened the emotion and sense of drama by adding music, and sometimes created a masterpiece.) Then some modern day wannabe rebuilt the story around a Malibu beach house and threw in the LAPD hastling the homeless, and thereby subtracted from the power of the work rather than adding to it.

So ordinarily I would have detested the attempt to recreate something that doesn't need recreating, but in this case it not only didn't hurt, it brought home the story and the characters at a level that might not have occurred in a more traditional staging. When you see yourself in the main character, the drama is working.

Three people have to be mentioned here. The L.A. Opera chorus is now directed by Jeremy Frank. This was a good start. The new Resident Conductor is Lina Gonzalez-Granados (from Colombia originally) in her first L.A. Opera conducting role. Also a good start. Finally, we heard Liv Redpath in the title role as Lucia. The first three performances were sung by Amanda Woodbury, who thereby was the subject of most reviews. Redpath sang the September 28 performance, and will sing the October 2 and October 9 performances. Redpath has a terrific voice with plenty of power and range, and she looks the part of an attractive teenage girl that every man in the story wants.

One other point. This production begins with a camera crew (including a steadicam operator followed around by a director) who are documenting the unhappy life of Lucia. There is a screen upon which their video is projected, which also serves to provide the English language translation. I found it to be an addition to the overall art, because it provides closeups when they are useful. The idea of taking a beautiful young girl and projecting her on a big screen goes back to D.W. Griffith in the early 1900s, and is being used more and more in opera.

My one complaint is unusual, but here it is. At the conclusion of the evening, the audience was eager to stand and shout their approval of the young soprano Redpath and of the new conductor and of the overall performance, including all the other talented singers of whom I have not spoken here. The management brought down the curtain after a mere few minutes of eager applause.  My view is that applause, even when sustained, is part of the emotional catharsis that the audience seeks, and should be allowed to continue for a reasonable amount of time.