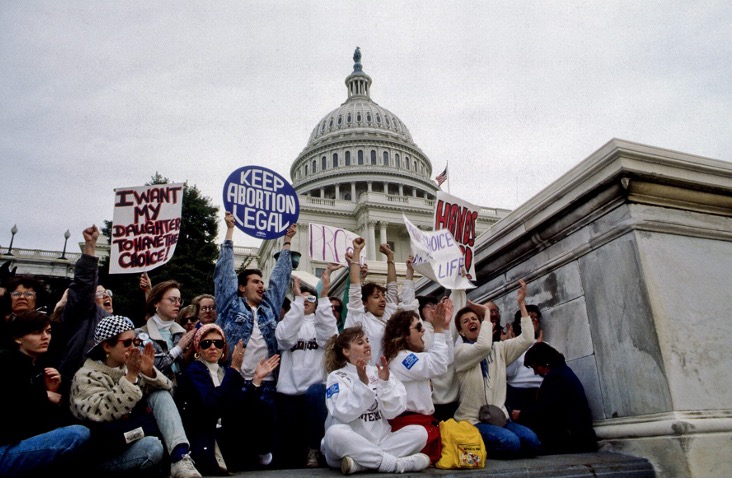 GELFAND’S WORLD - In the congress, Republicans have violated taboos, traditions, and principles in order to prevent the Democrats from achieving legislative success, and out of all their skullduggery, we have the current Supreme Court.

And from that court we've already suffered the overturn of the Roe v Wade decision, with other bad stuff yet to come.

Even now, there is damage to medical care, as doctors fear to prescribe methotrexate (it has been used for lots of conditions over many decades) or to abort a dying fetus until there is no sign of a heartbeat. This has clearly endangered women's lives.

The Republicans may see these changes as victories. Some are ignorant enough to want to forbid the removal of ectopic pregnancies.

The Republican assault on our rights goes way back. The congressional Republicans have been the House bullies since the days of Newt Gingrich. Bullying in the Senate has been equally bad, if not worse. And the Democrats keep trying to pretend that if they can only set a good example for long enough, the people will demand that the Republicans start playing fair.

Not going to happen.

The way you deal with bullies is to hit back. The Democrats could do so, if they were willing to take a few risks.

Here is one idea. There are lots of military bases containing hospitals and infirmaries in the red states. There are Navy bases and Air Force facilities. The president, by executive order, could open them to the civilian population for specific kinds of treatments, one of which would be reproductive services. That would allow for at least a modest number of abortion clinics within the broader boundaries of the red states. For example, Texas has more than a dozen military facilities.

Here's where it would get interesting. The anti-abortionists in the congress would undoubtedly offer amendments to any legislation involving military appropriations, making it illegal for such services to be offered. This is where the Democrats could do a reverse-Gingrich. Remember when Newt played a gigantic game of chicken with the country by threatening to shut the government down? Remember how the Republicans made this a standard legislative game? Let the Democrats do the following: If the Republicans try to forbid federal properties from being used for reproductive services, say the following: "OK, we may not be able to get this appropriation passed the way we want it, but we will refuse to pass any appropriation at all for these facilities.

Or maybe the Democrats could cut the appropriation for each facility by half.

The Democrats will have the power to withhold federal funding for at least the remainder of the Biden presidency, no matter who controls the congress. What's been missing is willingness on the part of the Democrats to play Newt's game in the modern era.

There are lots of other ways that the blue state congress people can withhold from the red states. There is ship building, airplane construction, and more. This doesn't mean that blue state citizens want such shutdowns, it just means that negotiations between red state and blue state legislators should be a two-way street. In recent years, the red staters have had an advantage because they have been willing to threaten government shutdowns. It's time that the Democrats called their bluff with threats of their own.

I will give the standard disclaimer here that I am not a lawyer. But there are a few clues available even from a cursory internet search. There are federal facilities such as post offices and administrative buildings, and some of them are truly federal in the sense that the state has no jurisdiction over them. There is even a term for such places, federal enclaves. As the attached article shows, the conservatives at one time made use of federal enclave doctrine to fight against organized labor. How about turning that tactic around?

There are also many VA hospitals and clinics around the country. Some of them may be federal territory, even if others are not. In fact, there was a proposal some years ago to open some of the rural VA hospitals to the public, in the hope that this would allow for the continuing funding (and construction) of lots of VA facilities. The proposal died due to political considerations, but there was no suggestion at the time that there was anything illegal about the proposal. With the addition of large numbers of women to the armed forces, the VA system has had to adapt. Opening VA clinics and operating rooms to civilian women for a limited number of conditions ought to be legal.

Or one last crazy idea. How about if the president declares the abortion clinics in red states to be federal scenic areas. The right wing will blow sky high, but it takes an act of congress to undo such an action. While he's at it, he should make the scenic areas go at least a block in every direction from the clinics.

Covid-19 news and why we should continue to be concerned

While we're all-fired up about the political news, the ongoing catastrophes of global warming and the Covid-19 pandemic continue. We shouldn't forget them. Let's consider where we are in the Covid pandemic.

For me personally, it is like a good news, bad news joke. The good news is that I casually asked about getting my second Covid-19 booster shot at the pharmacy the other day, and 5 minutes later they were giving me the dose. No muss, no fuss, no issues of limited availability, and no lines. There must be plenty of vaccine around, because I've walked past several pharmacies (mostly in supermarkets) and they are all offering the vaccine.

Now for the bad news. It starts with an observation I made a couple of months ago. At that time, the death rate from Covid in Los Angeles County had declined rapidly and was at an average of two per day. It looked like the people of L.A. County were at partial herd immunity for the virus, and I reported that observation here in City Watch. There was nothing wrong with the observation or the data or my logic, it was only a question of whether we could maintain that level of immunity against the lingering number of new cases or the possibility of a more aggressive new variant.

New variants are finding their way into the population. Here is what the more recent L.A. County data show: The Covid death rate has been rising steadily from the beginning of May through the present. Unlike the first few months of the pandemic back in 2020-21, the increase is not an exponential curve (the one that rises faster and faster, doubling every two weeks) but a kind of slow, straight-line affair. The death rate has risen to about 7 per day on the average and at the moment has held steady at that level for a few days. Still, this is a two to three-fold increase over 10 weeks. If the numbers keep rising at this rate, we will be in for trouble.

So even though I just got my fourth dose of the mRNA vaccine, I'm somewhat concerned due to the ability of new variants to overcome the immunity conferred by the vaccine. The buzz word continues to be "breakthrough" cases. I would like to get a dose of a new vaccine that is more directly tailored towards the new variants.

When that new vaccine might be available is still up in the air. It's not that the Pfizer and Moderna people couldn't design the new vaccine and develop a manufacturing process over the course of a month, but that we need to guess which Covid variant to aim at. (Or should the vaccine manufacturers design a vaccine against as many new variants as they can and put them all together in a multivalent shot?

You may notice that I'm not writing about continuing efforts by the anti-vaccine movement to question the effectiveness or safety of the Covid vaccine. I think that this is a dead issue among people who have looked at the data. We know that there have been untoward reactions to the vaccine in some people, but we also know that the world has experienced over 11 billion vaccine doses (approaching two per person worldwide) and most of us tolerate it pretty well. I've got a spot of minor soreness in my left arm right now, which makes me pretty average.

Meanwhile, the U.S. has been suffering about ten thousand new Covid deaths every 28 days, as you can learn from checking the Johns Hopkins web site.