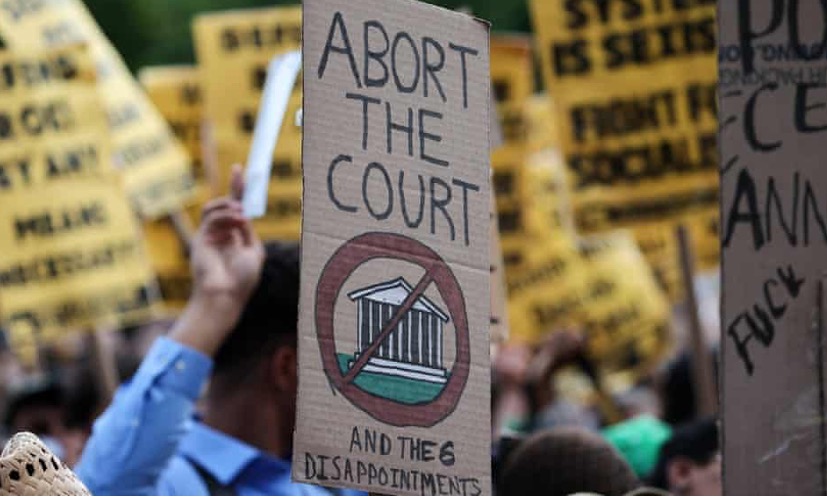 GELFAND’S WORLD - Let's begin with this question: Is it even a bad thing that the Supreme Court has lost the respect of the American people?

We know that the Court is starting to be viewed by the public as being at the level of the congress or the state legislature -- petty, vindictive, and contemptuous of personal freedom. This court is admittedly a lot worse than previous courts -- at least since the Civil War -- in its hyper-partisanship and its representation of a minority religious faith as its majority. The doctrine that life begins at conception is not a scientific finding, and the unspoken part of the anti-abortion doctrine is that there is a God who endows the fertilized egg with an immortal soul at the moment of fertilization. There are a lot of Americans who don't believe in that doctrine -- a seriously fundamentalist view to be sure -- and would like to be left alone in their personal beliefs. And one of those beliefs is that the decision to have an abortion is not for the state or the nation to decide.

There will be a lot of discussion about how two or three of the justices perjured themselves in their testimony before the Senate. This is of course true (they may have told the truth, but they didn't tell the whole truth), but right now it is also irrelevant. Even if two or three of them were to be removed by impeachment, the abortion decision will still be there, poisoning our political atmosphere for months or years to come. The fact that senators Manchin and Collins are expressing buyers' remorse over voting to confirm them is not to be taken seriously. It was made clear well in advance that Trump appointees would be put there to overturn the Roe v Wade decision.

An aside: The process of fertilization is a complicated thing which takes time and involves many steps. Biologists who have studied it sort it out into the acrosome reaction, the penetration of the sperm head across the plasma membrane of the egg cell, the creation of a fertilization membrane surrounding the egg which prevents another sperm inserting its own nucleus (that would be a bad thing), the prolonged process by which the two nuclei fuse to form one nucleus, and then the whole series of events that ultimately lead to the one cell dividing into two cells.

And when you watch this process under the microscope -- typically using cells from some other species such as a frog -- it doesn't seem like a religious event, but rather a complicated but routine biological event that happens in nature all the time. The non-religious among us don't see the events of fertilization as a divine happening. Nor do they see the next set of events -- the cell divisions that lead to a ball of cells called a blastula, the formation of a structure known as a gastrula, or the event called the formation of the notochord.

None of these structures have nerves (or nerve cells) or a brain or a heart or much of anything else other than cells which carry the DNA that will ultimately convey the final body plan.

So now the United States Supreme Court has officially endowed such structures with the finding that they should enjoy protection due to their divine nature. Maybe the Court didn't say it in those exact words, but that is the clear meaning of their verdict. The decision points out that abortion is a different matter than all other things including contraception and the right to marry somebody of the same sex. What else could they mean other than that they are enforcing a purely religious doctrine on the whole of the American people?

After all, the assertion that "life begins at conception" implicitly means that the life referred to is worthy of divine protection.

So let me ask: Is it some sort of journalistic overreach to point out that the Court has been selected and nominated to represent not only a Roman Catholic point of view, but what is essentially the official, orthodox Roman Catholic point of view? There are lots of Catholics in this country who have been and would continue to be tolerant of abortion, not just because they recognize that this is a diverse country, but also because many Catholics have made use of abortion services when they felt it was appropriate.

The same discussion also applies to the faction within the Protestants which has joined with Catholicism on this one matter.

No matter what else you call it, the Supreme Court decision is ultimately theological. It places one religious point of view above that of other Americans who think and believe differently. The decision runs roughshod over the views and wishes and perceived needs of the majority of Americans who disagree completely with this Court.

The only remedy is to enact severe and fairly radical changes

American women have enjoyed freedom of abortion for half a century. Do we imagine that they will accept this radical change in their freedom on the whim of the most extreme element in American politics? I tend to think that the answer is No. On the other hand, the solution does not lie in street demonstrations. The answer is to develop a voting bloc that will return the congress to a working Democratic majority that is willing to abolish the filibuster (at least on this one issue, and possibly one or two more) and fix the problem that Donald Trump and his hand-picked Court have created.

I would hazard a guess that the move to enlarge the Supreme Court so as to put a centrist voting majority in charge has gained a lot of ground this week. As the possibility of returning abortion rights to individuals (as opposed to state legislatures) becomes known, there will be increasing efforts to get out the vote in November so as to make this possible.

Two things are required. The first is that lots of people who don't always vote come out in November to allow the Democrats to hold the House. The next is that those same voters replace Republican held Senate seats with Democrats. We can imagine this happening in Wisconsin, for example.

A newly enlivened movement to enlarge the Supreme Court (it will be referred to as "packing the Court" by opponents) will be attacked as being radical and extremist. It may be so. But the argument coming from this side is that the current Court is now totally extremist, having violated the previously accepted separation of church and state, violated women's autonomy, and inserted its views on gun violence in what is clearly the wrong direction.

The right wingers are ecstatic. The rest of us are appalled, but not really surprised. After all, there have been many Supreme Court decisions over the past couple of centuries that were also appalling. But this Court, in rolling back voting rights and the right to be left alone in your own religious convictions, has moved the bar substantially. The fight is now defined, and it is up to American voters whether they will or will not accept the new doctrinaire approach to American governance.

And that is why it's not such a bad thing that this decision has destroyed the reputation and deserved trust in the Supreme Court. From now on, we will look at everything this court does as tainted. Even when they are acting more like a court and less like the Spanish Inquisition, they will still not be trusted, because we will all know that they are fundamentally untrustworthy. When the dust settles after November 2022, we will learn whether we are going to have a Supreme Court and a judiciary we can once again believe in.

And it will be up to the courts to earn and keep that trust.

But right now, every judge in the United States, at every level, will be viewed differently than he or she was viewed two weeks ago. That is unfortunate, but the wearing of the robe is suddenly something that conveys distrust rather than trust. It cannot be otherwise as of this moment. We can hope that at the local level, most judges will continue to behave in a way that induces trust and decent conduct on the part of those who come to their courtrooms. But judicial overreaching at any level will be viewed with anger in the future, as it should.

(This decision also comes at an inopportune moment for the current District Attorney of Los Angeles County. He has been making policy changes that many will view as essentially being attempts to ignore -- hence to change -- existing criminal law. It is up to him to disprove this assertion, but for now his recall will be just one more bit of collateral damage in the inevitable public relations firestorm that comes from this Supreme Court decision. The conservatives would vote for his recall anyway, but now there will be plenty of liberals who will have a sudden distrust of all things judicial.)

The Cure and Future Prevention

My view of the reaction by so many Americans to this decision is that there is a pretty strong demand for this decision to be overturned and replaced with something equivalent to what we had up until this week. That implies a fairly radical restructuring of the current system which would require certain things to fall into place in the following order:

Election of enough new senators to provide a solid Democratic majority even without including senators Manchin and Sinema.

Election of a majority of Democrats to the House.

Repudiation of the filibuster by the next senate

Bills to enlarge the Supreme Court as well as the federal appellate court system.

Appointment and confirmation of the judges who will overturn the anti-abortion decision as well as many others including the decision which allows unlimited political campaign donations by corporations.

Legislation passed by both houses of congress and signed by the president to protect personal rights, including the right to vote.

And so forth -- a new Supreme Court would uphold a newly revised Voting Rights Act.