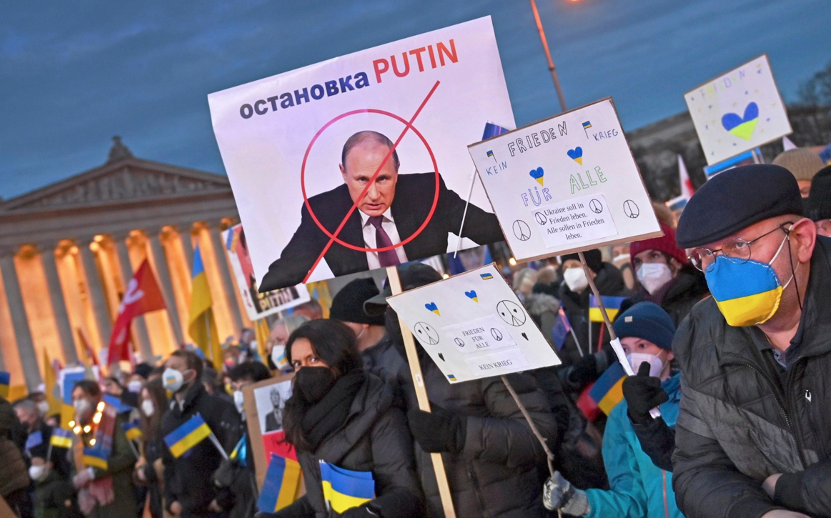 GELFAND’S WORLD - The recent news from Ukraine and from its Russian invaders reveals an unsettling truth about our own country's political culture.

Let's start with the horrible truth about the Russian invaders as revealed by journalists and by the Ukrainian army as they have retaken territory adjacent to the Ukraine capital of Kyiv.

The Ukrainians recovering once-occupied areas, joined by journalists from other countries, have discovered lots of murdered civilians. Often they are found with their hands tied behind their backs, killed execution style, sometimes weeks ago. The evidence points to horrific war crimes by the Russian army.

What has the Russian Federation to say about this?

It calls this "fake news." It blames the civilian deaths on the Ukrainian defenders. It tries to sell the rest of the world on the idea that the Ukrainian civilians were murdered in a "false flag" operation by the Ukrainians themselves.

The fact that these are blatant lies was revealed through use of satellite imagery from days and weeks ago, showing the dead. You can read an account of it here.

The transparency of the lies

The Russian military even lies about its humiliating defeat in its attempted takeover of Kyiv. They talk as if this were just a feint to allow them to control the eastern part of the country. How transparent does a lie have to be before it is laughed off?

So here's the summary of the Russian approach: Everything bad that they and their troops have done is somebody else's fault. Every defeat is a victory.

Does this approach remind you of anybody? A former administration in this country perhaps? Was inauguration day -- January 20, 2016 -- the largest crowd ever to attend a presidential inauguration? That's how the administration began its relationship with the American people, and the approach to truth did not get any better.

For the Trump administration, every bad thing was good and every defeat was victory. Remind you of anything?

The Big Lie as a political technique was used by the early Bolsheviks to their advantage. They called it "agitprop." The Nazis expanded on the audacity of the lies. For those who grew up in the 1950s and '60s, it was a commonplace that the Soviet Union told a lot of whoppers. It was simply the way they did business -- their style, so to speak. That's not to say that Richard Nixon was always a paragon of truth telling, but at least our culture considered it unmannerly to lie egregiously, particularly when it had to do with your own bank account or the character of your political opponents.

In a more modern day, in a more recent administration, we became used to the president's comments every time one of his previous aides told the truth about his inadequacies and his character defects: "Fake news." Or that frequent remark,  "She's a disgruntled former employee who we had to fire."

Trump and Putin use the same techniques to lie and deceive

I'd like to suggest the following two generalizations about what Trump says (lots of others have been saying this for a long time; I am just borrowing it here).

Every accusation that Trump makes against someone else is an admission of his own guilt.

Most brags on Trump's part (particularly with regard to foreign affairs) are admissions of failure.

The idea of attacking your opponent at his strength was not invented by Trump. It was made popular in the modern Republican Party by Karl Rove and a few others. Remember when the George W. Bush surrogates attacked his presidential opponent John Kerry for not being a proper hero in his Viet Nam service? Remember that Bush had wangled an appointment to the National Guard (a way of avoiding the draft and therefore avoiding being sent into combat) and even then, ditched his service for a year?  Yet the right wingers cobbled up an attack on Kerry's service and patriotism. So this approach is nothing new in Republican politics, but Trump took it to a new level, where the truth was a rarity.

An accusation is really an admission.

So Trump didn't invent the technique. But notice one thing. Trump claimed, in spite of evidence to the contrary, that he and his campaign had nothing to do with Russia or Putin. That the meetings between his family and Russian sources were entirely innocent. In Trump's case, a denial is usually an admission of guilt.

Trump has never really explained his ongoing attacks on NATO, or the Helsinki embarrassment.

So when Trump and his cronies try to tie Joe Biden to something unethical in Ukraine, try looking at it from the standpoint of those rules about Trump mentioned above -- Trump and Putin are working together in attacking the validity of Ukraine as a sovereign country and attacking the current administration as our legitimate government.

It couldn’t be any clearer or more transparent short of having a round the clock video in Vlad Putin's office. Trump is in Putin's back pocket and has been so for many years, since well before he was president. He did Putin's bidding in trying to tear down NATO, in undercutting our own intelligence services, and in disrupting our alliances with European countries and with South Korea.

It's all there in the public record.

The question is when Trump's American supporters will recognize the underlying format of the technique, and how their leader uses precisely the same techniques as the former-Soviets.

It would appear that the former president is even now, while the Ukraine war rages, publicly asking Vladimir Putin to provide him dirt on the Bidens. That is to say that Trump wants the Russian propaganda machine to continue to help him in his war against his own country's government.

The Democrats in the House of Representatives would like to put some controls on the price of insulin. That's because the two main suppliers of insulin have an approach to pricing that goes like this: When one raises prices, the other also raises prices. You can read about pricing trends here.

In brief, the price of insulin has been rising steadily for at least twenty years. We should also remind ourselves that insulin was discovered in the 1920s and has been sold to diabetics for many decades. It's not like your current-day pharmaceutical companies are doing billions of dollars in research to discover insulin. They're just keeping their bottom lines well padded.

But most of the Republicans in the House didn't vote for the bill. They have lots of Republican reasons for opposing any attempt to interfere with the free market, even though the data show that this is more a market failure than any kind of free market in insulin products.

Congressman Gaetz wins the prize for his explanation of why he opposes the bill. You fat Americans should lose weight. Obesity contributes to diabetes, so we will all save money by being less fat.

Curiously, he's not entirely wrong, although it doesn't really fit Type 1 diabetes. If you have Type 1, you can be thin as a rail and still need your insulin. Not only that, but there are tens of millions of Type 2 diabetics and pre-diabetics, and insulin is often (not always) a useful treatment for many of them. However they got to that state, it's expensive, and the price gouging by the pharmaceutical companies is a real thing that puts financial stress on diabetics.

My suggestion: The press should start to address the congressman as Dr Gaetz, and start asking him for medical advice about their bunions and aching backs.