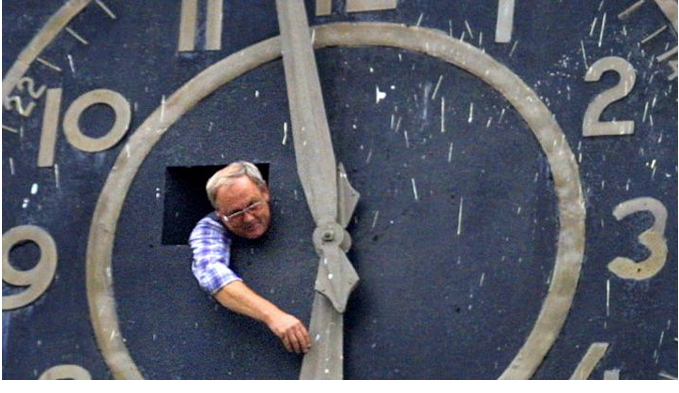 GELFAND’S WORLD - The following story was embargoed until at least Friday, but I decided to release it anyway considering its importance:

In an unlikely but surprisingly logical move, members of the Republican leadership in the congress and California legislative leaders (not surprisingly all Democrats) have been talking secretly about a solution to the problem of Daylight Savings Time. Most of us don't think about it much other than to recite "spring forward, fall back" twice a year in order to remember which way to change the clock.

But for many influential blocs -- farmers, factory owners, school bus drivers -- it is consequential in a way that most of us wouldn't understand. And that's why these political leaders, who otherwise won't give each other the time of day, are talking about the time and the day.

But these secret talks are different from the previous discussions, which typically involved either going to permanent Daylight Savings Time or abandoning DST entirely.

It turns out that an otherwise unnoticed but vastly influential group of financiers and brokerage houses have been increasingly frustrated by the fact that Asian trading floors have a nearly 12-hour advantage over the New York Stock Exchange and the Chicago Mercantile Exchange. The far-eastern exchanges are able to react to market forces half a day earlier. This was something that the Americans were able to shrug off for years -- "half a day behind is nearly the same as half a day ahead" is how they rationalized things.

But in the modern era of rapid fluctuations in oil prices, platinum futures, and all the other price movements in this complex, modern world, they've decided (in the modern equivalent of the smoke-filled room) that something needs to be done. And that's where their boldness coupled with the quiet agreement of usually opposing political sides is coming to the fore.

In brief, the secret agreement is that -- instead of being satisfied with a mere hour change in the clock -- we will move our calendars ahead one full day so that now we will be 12 hours ahead of the Asian exchanges instead of 12 hours behind.

One trader, who chooses to remain unnamed, gloated that "Now they will have to chase us instead of the other way around."

There has already been blowback from a few calendar printers (who were supposed to be kept in the dark until the announcement was made, but through their own sources found out about the sub rosa agreement). After all, they will now have to change the days that correspond to each date. What would have been Friday will now be Thursday, and so forth.

Who would have thought that calendar printers would be so influential, but when you think about the interactions in modern American business, it becomes obvious.

As you will have figured out, the deal is still a little shaky and is yet to be announced, but in token of the change soon to be coming, I am dating this column:

Other news of note

What do the following have in common?

They should be April Fool jokes but are not.