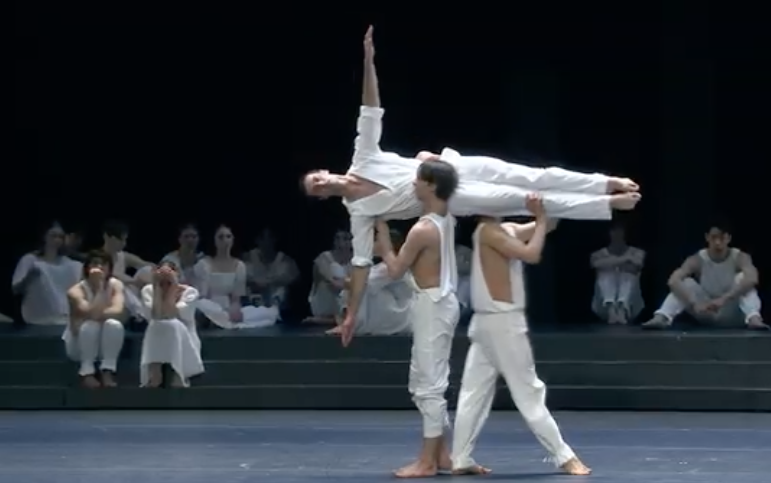 GELFAND’S WORLD - Early Sunday afternoon, while film fans and industry people were making their way towards the Academy Awards presentation,

around two thousand of us were making our own way towards the Music Center in downtown Los Angeles, there to see a performance of Bach's St. Matthew Passion with ballet accompaniment. The music had its debut just under three hundred years ago and is said to represent Bach's favorite piece among his many hundreds, and is also said to be one of the greatest musical works of all time.

So while the press were obsessing on whether or not one Oscar winner punched a comedian on live tv, we few were experiencing a different world.

I said above that the musical performance (orchestra, two choruses, several soloists) was accompanied by a ballet. That last part is only partly true in the sense that most people think of ballet. It was a mixture of some traditional ballet elements along with what might be called interpretive dance or perhaps modern dance. But in this modern digital era, it is possible to go beyond wordy descriptions and just show you a glimpse of what an audience would see.

Here is a brief preview of the Los Angeles version of the performance.

One striking element was how the all-white costumes of the dancers played off against the deep black background. I think it is also possible to see from this snippet how un-classical the dance moves can be.

I won't go into the history or musicology of the piece other than to point out that when the piece was first performed, it was part of the extensive religious ritual of the week before Easter, and would have been performed as two parts separated by a long sermon. In short, the piece is the religious creation of Johann Sebastian Bach taken from the Gospel of St. Matthew, and telling the story of Christ's betrayal, trial, crucifixion, and return.

A new and different art form?

The St. Matthew Passion is therefore intended to be a religious event and was written to be heard. The commenters in the program try to argue that Bach wrote many pieces that are, in effect if not name, operatic, since they use the same elements -- instrumental performance, the chorus, and soloists. But one does not imagine a church service of the early 18th century including a full group of women in gauzy dresses dancing in front of the worshippers.

Still, we have seen many reinterpretations of famous works (the many weird productions of Wagner's Ring come to mind) that sometimes expand on and other times seem just to pervert the original intent of the composer.

But when you take the central religious story of the past thousand years of European history, the artistic risk is greater, because the story as told by Matthew and Bach is not subject to the same level of reinterpretation that a newly-made story told in 1865 or 1965 would be.

In trying to present a little more nuanced idea of this remarkable achievement, I managed to pull up a longer cut, which appears to be taken from the second of the two acts.  May I suggest that you scroll forward to the section running from approximately 38 minutes to 46 minutes to get an idea of how the female and male groups worked both separately and with each other to present what became a sometimes moving, sometimes hypnotic, sometimes literary interpretation.

The St. Matthew Passion is a fairly long work, running approximately three and a half hours plus the intermission. There were some breaks where the dancers simply sat and listened, but most of the time was filled with some movement by some subset of the group. That is a lot of dancing. And it was broken up into many different approaches, ranging from small groups doing essentially classical ballet moves to large groups doing something very different. The program lists 78 different sub-performances.

As the lights went down, the chorus began to sing. Simultaneously, people began to clap (most unusual for this kind of performance) and then to stand. A few moments later, it became obvious that there was a Ukrainian flag on stage and we had been hearing the Ukraine anthem. The flag was walked off to more applause.

There is a long-respected formal tradition whereby sports teams from different countries are presented with the national anthems of both. There is even an accepted order by which the anthems are played. The ritual suggests a shared respect for the representatives of both nations and the further suggestion that the rules of sportsmanship will be respected. What we have been seeing lately with these unilateral and almost-spontaneous salutes to Ukraine and its people is something quite different. It is a universal revulsion towards the invaders and sympathy to those being invaded.

When the performance was over and the lights went down, the audience got to their feet and delivered a standing ovation that went on for -- it seemed -- something like ten minutes. I suspect that it was both an appreciation of the remarkable achievement on stage, the excellent musical playing and singing, and in addition a release of tension that has visited all of us these past several weeks. The war had not ended, but this moment was a chance to communicate some level of feelings we have been enduring. It was a chance to celebrate life, even as we mourn and fret. We have been seeing something of this same feeling as each new performance in the Covid and post-Covid era remind us of the time that has been lost. All in all a fine performance delivered in a terrible month.